Byju's Answer
Standard X
Biology
Introduction to Genetics
Which of the ...
Question

Which of the following statements about agarose gel electrophoresis is/are incorrect?

I. It is a common method used to separate the DNA fragments based on their size.
II. The DNA fragments can be detected by ethidium bromide staining followed by exposure to ultraviolet rays.
III. The movement of DNA is modulated by the strength of the electric field.
IV. The electric field allows the migration of positively charged DNA towards the negative terminal.

Besides, the pore size of the gel is a determinant of the degree of migration. The pores create a sieving effect and help in the separation of DNA molecules based on their size. The greater the size of the DNA molecule, the greater is the resistance that it faces to pass through the pores of agarose gel. Hence, the smaller sized DNA can migrate over longer distances on the gel towards the anode.

Voltage also plays a significant role in the rate of separation of DNA fragments. Under a specific condition, the higher the voltage, the higher the electric field strength between the two electrodes. Hence, higher is the force acting on the charged molecule (here DNA) to migrate. Hence, the movement of DNA and speed of migration is affected by the strength of the electric field.

The DNA fragments can be visualized by staining with ethidium bromide (added in the gel during gel preparation), followed by exposure to ultraviolet rays. 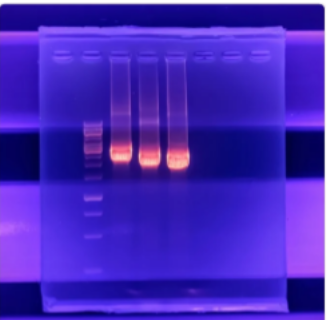 Suggest Corrections
1
Similar questions
Q. In agarose gel electrophoresis, the separated DNA fragments can be visualised after staining the DNA with EtBr under:
Q. Study the given figure carefully and select the incorrect statements regarding this.(i) It represents a typical agarose gel electrophoresis in which lane 1 contains undigested DNA(ii) Smallest DNA bands are formed at A and largest DNA bands are formed at B(iii) The separated DNA fragments can be visualized after staining in the visible light(iv) The separated DNA bands are cut out from the agarose gel and extracted from the gel piece. This step is known as elution. Q. A mixture of DNA fragments, such as those made by restriction enzyme digestion, can be resolved by gel electrophoresis. Loading DNA sample into wells at the top of the gel (see figure) will migrate through the gel in response to an electrical field.
What component of the DNA macromolecule is responsible for its migration toward the positive terminal?

Q. Which of the following statements are correct?
(i) Restriction enzymes cut the strand of DNA a little away from the centre of the palindrome site, but between the same two bases on the opposite strands.
(ii) Hind II always cuts DNA molecules at a particular point by recognising a specific sequence of six base pairs.
(iii) Separated DNA fragments cannot be visualised without staining on an agarose gel electrophoresis.
(iv) Ori is the sequence responsible for controlling the copy number.
(v) DNA is a positively charged molecule.
Q. Select the correct option to fill up the blanks.
(i) _____ is a natural polymer extracted from ______.
(ii) The DNA fragments purified by gel electrophoresis are used in constructing _____ by joining them with ______.
(iii) The ligation of alien DNA is carried out at a _____ present in one of the two ____ in a plasmid vector.
(iv) _____ enzyme remains active during the high temperature-induced denaturation of ds DNA. DNA fragments are resolved according to their ______
(v) through _____ in agarose gel electrophoresis.
View More
Explore more
Introduction to Genetics
Standard X Biology
Solve
Textbooks
Question Papers
Install app