Draw a right triangle in which the sides (other than hypotenuse) are of lengths 4 cm and 3 cm. Then construct another triangle whose sides are 5/3 times the corresponding sides of the given triangle. Give the justification of the construction

3. Considering B as a centre and draw an arc with a radius of 4 cm and intersects the ray at point B.

4. Now, join the lines AC and the triangle ABC is the required triangle.

5. Draw a ray BX makes an acute angle with BC on the opposite side of vertex A.

8. Draw a line through B5 parallel to B3C which intersects the extended line BC at C’.

9. Through C’, draw a line parallel to the line AC that intersects the extended line AB at A’.

10. Therefore, ΔA’BC’ is the required triangle. 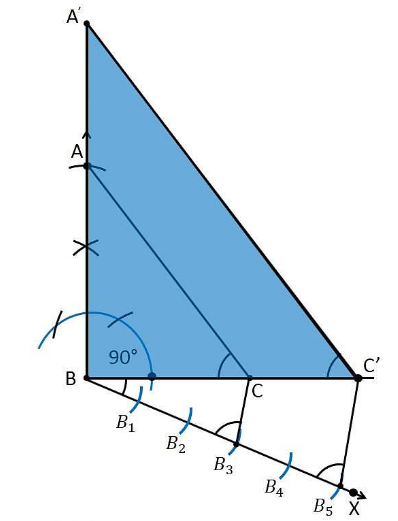 since the scale factor is 5/3, we have to justify