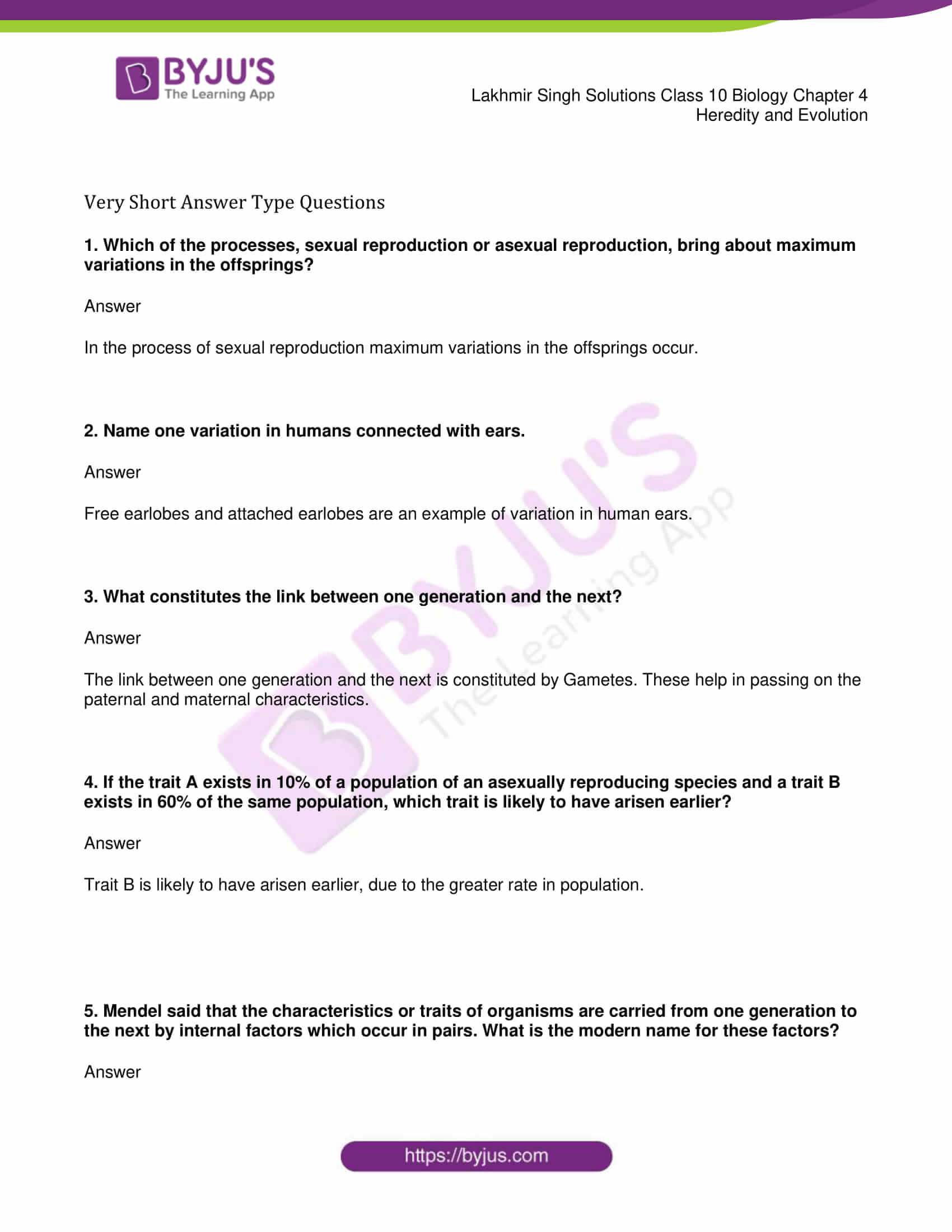 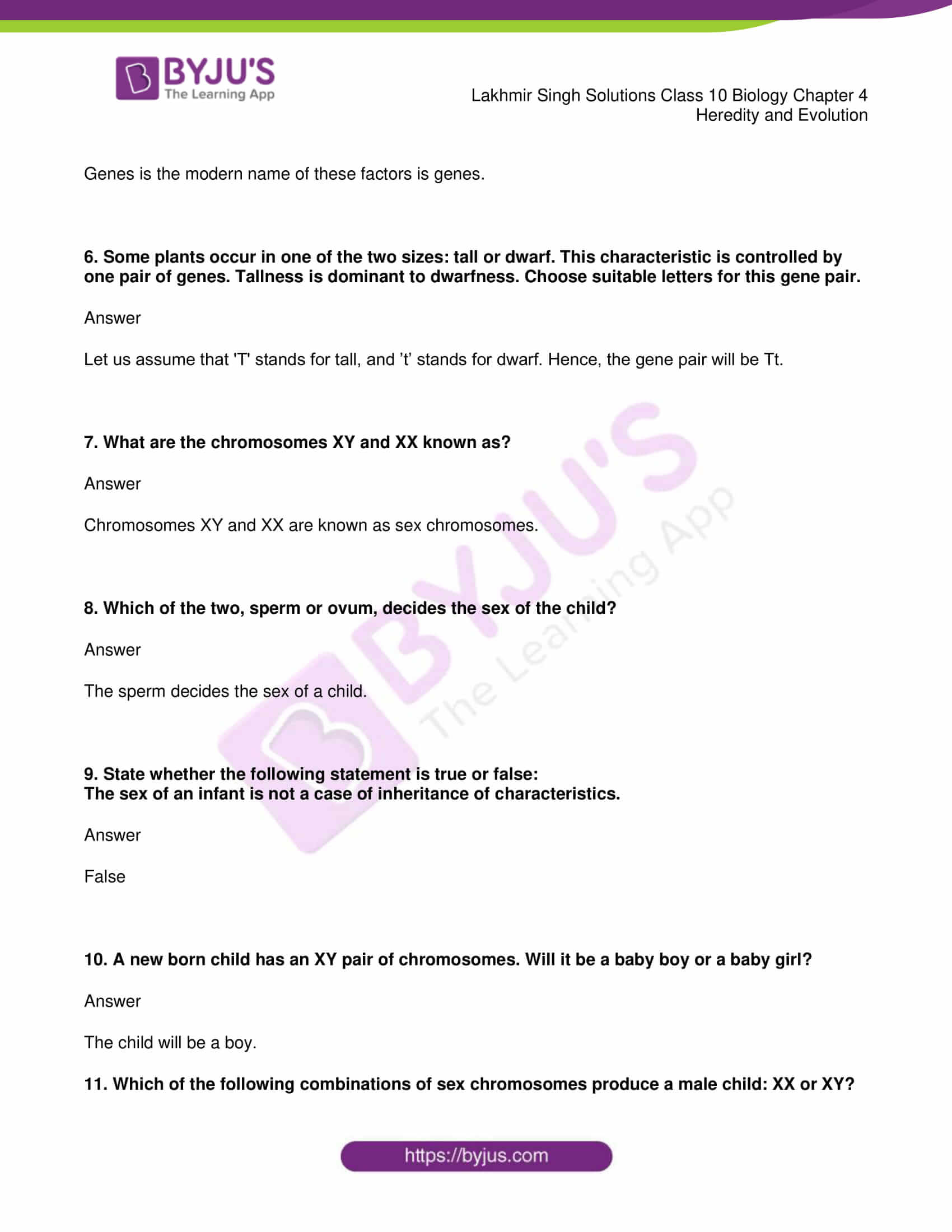 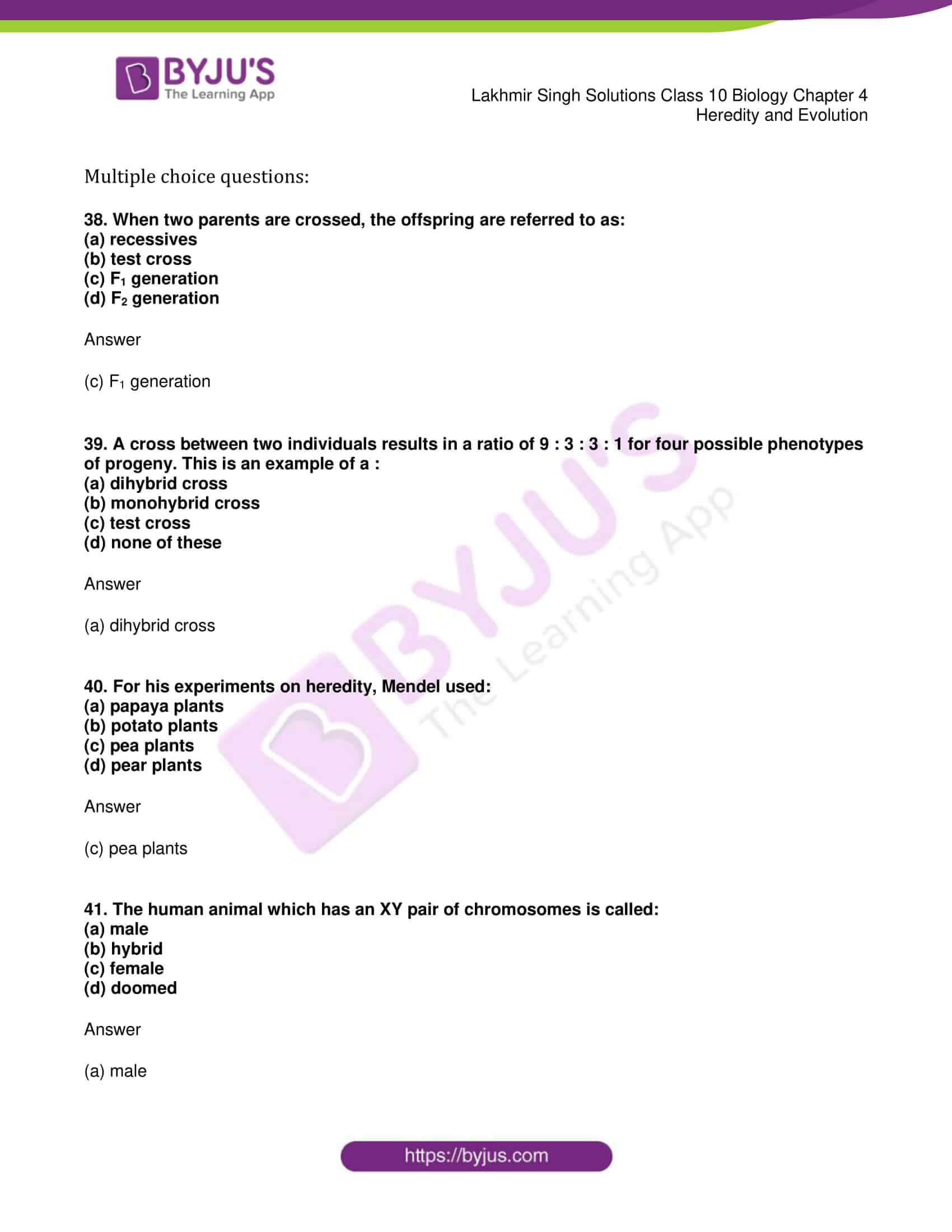 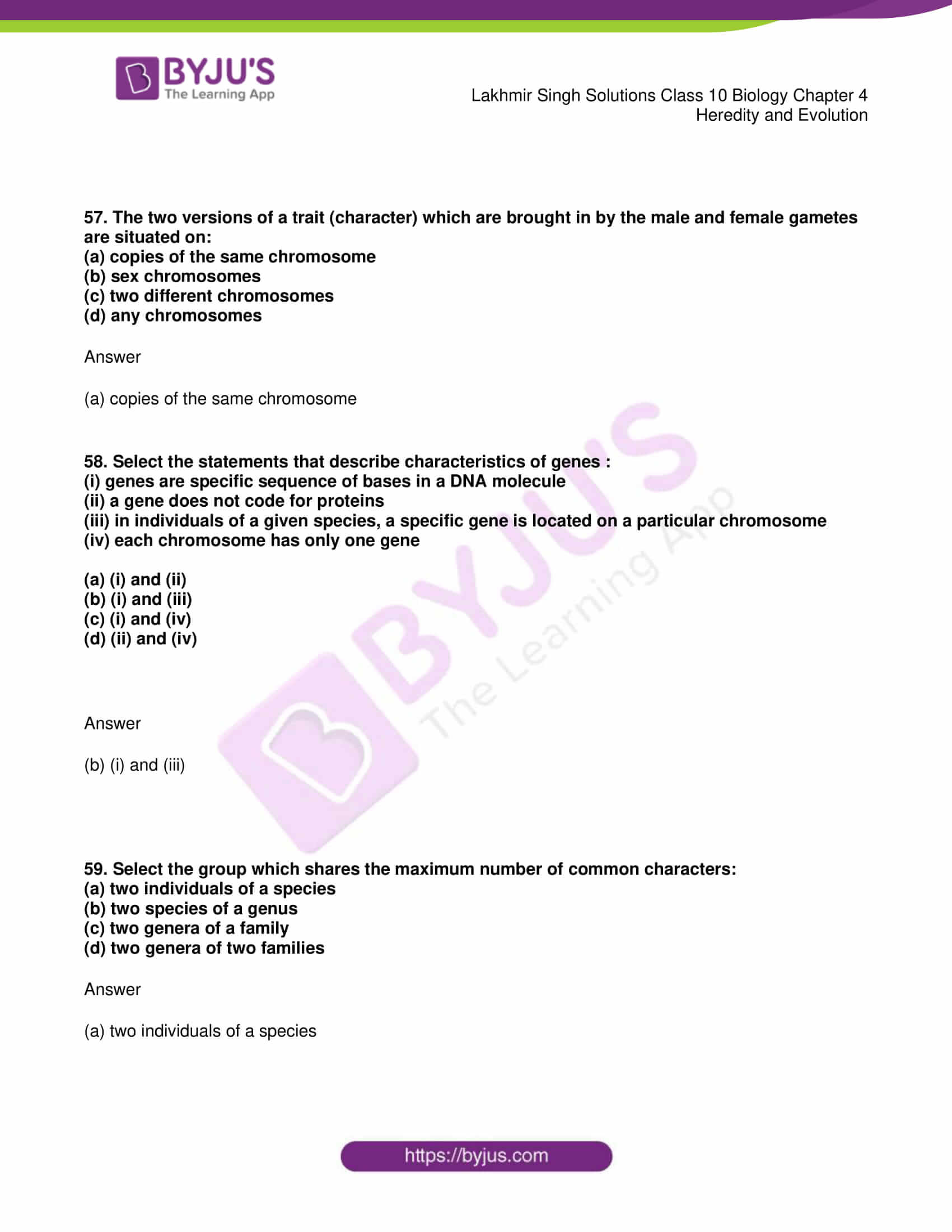 In the process of sexual reproduction maximum variations in the offsprings occur.

2. Name one variation in humans connected with ears.

Free earlobes and attached earlobes are an example of variation in human ears.

3. What constitutes the link between one generation and the next?

The link between one generation and the next is constituted by Gametes. These help in passing on the paternal and maternal characteristics.

4. If the trait A exists in 10% of a population of an asexually reproducing species and a trait B exists in 60% of the same population, which trait is likely to have arisen earlier?

Trait B is likely to have arisen earlier, due to the greater rate in population.

5. Mendel said that the characteristics or traits of organisms are carried from one generation to the next by internal factors which occur in pairs. What is the modern name for these factors?

Genes is the modern name of these factors is genes.

6. Some plants occur in one of the two sizes: tall or dwarf. This characteristic is controlled by one pair of genes. Tallness is dominant to dwarfness. Choose suitable letters for this gene pair.

Let us assume that ‘T’ stands for tall, and ’t’ stands for dwarf. Hence, the gene pair will be Tt.

7. What are the chromosomes XY and XX known as?

Chromosomes XY and XX are known as sex chromosomes.

8. Which of the two, sperm or ovum, decides the sex of the child?

The sperm decides the sex of a child.

9. State whether the following statement is true or false:
The sex of an infant is not a case of inheritance of characteristics.

10. A new born child has an XY pair of chromosomes. Will it be a baby boy or a baby girl?

The child will be a boy.

11. Which of the following combinations of sex chromosomes produce a male child: XX or XY?

12. Name the first scientist who studied the inheritance of traits from one generation to the next.

The first scientist, who studied the inheritance of traits from one generation to the next was Gregor Mendel.

13. What type of plants were used by Mendel for conducting his experiments on inheritance?

Mendel used different varieties of pea plants for conducting his experiments on inheritance.

The hair colour of the person will be black because the gene for red hair is recessive compared to black.

15. What are the four blood groups in humans?

The four blood groups in humans are A, B, AB and O.

16. Name one reptile in each case where higher incubation temperature leads to the development of: (a) male progeny, (b) female progeny.

(a) Genes always work in pairs.

(b) In pea plants, the gene for dwarfness is recessive, whereas that for tallness is dominant.

(c) Most people have free earlobes but some have attached earlobes.

(d) A human gamete contains 23 chromosomes, whereas a normal body cell has 46 chromosomes in it.

(e) All races of man have different blood groups.

(f) The sex chromosomes for a female are XX, whereas that for a male are XY.

18. Which of the following represent tall plants and which represent short plants (or dwarf plants)?
(a) Tt
(b) tt
(c) TT
Give reason for your choice (The symbols have their usual meaning).

(b) tt represents dwarf plants, as t (dwarf) due to the presence of recessive gene.

(c) TT represents tall plants, as T (tall) due to the presence of dominant gene.

20. (a) Name the scientist who gave the laws of inheritance.
(b) Name an animal in which individuals can change sex. What does this indicate?

(b) Snail is an example of an animal that can change sex. This indicates that sex not determined genetically in some organisms.

21. Explain with an example, how genes control the characteristics (or traits).

Genes are the section of DNA that carry the chromosome and determine the characteristics of an organism.

(a) The increase in the chances of the species’ survival in a changing environment is the advantage of variation to a species.

23. Explain how, sex is determined in human babies.

(a) TT represents a tall plant.

(b) tt represents a dwarf plant.

25. (a) What will you get in the F1 and F2 generations in the following cross?
Pure tall pea plant × Pure dwarf pea plant
(b) It it an example of monohybrid cross or dihybrid cross?

(b) It is an example of monohybrid cross, as only one character (i.e., plant height) is considered for crossing.

26. In the F2 generation of a cross, progeny having different traits are produced in the ratio 3:1. State whether it is a monohybrid cross or a dihybrid cross? Give one example of such a cross.

The given condition is a monohybrid cross. In the F1 generation, when a tall pea plant (TT) is crossed with a dwarf pea plant (tt), all tall pea plants (with genotype Tt) are obtained. In the F2 generation, If these tall plants (Tt) are self-crossed, then the tall and dwarf plants will be in the ratio 3:1.

(a) The genotype of dwarf plants which always produces a dwarf offspring is tt.

(b) The genotype of tall plants which always produces a tall offspring is TT.

(c) (i) The genotype of dwarf plants is tt

(ii) The genotype of tall plants is TT. The parental cross of (ii) always produces a tall offspring.

28. (a) If a normal human cell has 46 chromosomes, how many chromosomes will be there in a human (i) sperm cell, and (ii) zygote?
(b) What sizes of plants are produced if both parents have genes Tt?

(b) Tall and dwarf plants will be produced in the ratio 3:1.

30. Gregor Mendel’s first law of genetics states “Of a pair of contrasted characters, only one can be represented in a gamete by its internal ‘factor’.
(a) Give the modern name for this ‘factor’.
(b) State where these factors are found in gametes.

(a) Genes is the modern name for this factor.

(b) These factors or genes are present on chromosomes in gametes.

31. Does genetic combination of mother play a significant role in determining the sex of a new born baby?

32. Give the contrasting traits of the following characters in pea plant and mention which is dominant and which is recessive:
(a) Yellow seed
(b) Round seed

33. (a) What is meant by ‘heredity’? What are the units of heredity?
(b) State Mendel’s first law of inheritance.

(b) Mendel’s first law of inheritance states that the characteristics of an organism are determined by internal factors which occur in pairs. Only one of a pair of such factors can be present in a single gamete.

34. (a) Why did Mendel choose pea plants for conducting his experiments on inheritance?
(b) State Mendel’s second law of inheritance.

(a) Mendel chose pea plants for studying inheritance because of the following reasons:

35. (a) What do you understand by the term ‘variation’?
(b) Name two human traits which show variation.
(c) How does the creation of variation in a species ensure its survival?

(a) The differences in the characters (or traits) among the individuals of a species is called variation.

(b) Human height and skin colour are two traits which show variation.

(c) The great advantage of variation to a species is that it increases their chances of survival in a changing environment. Variants help the species to survive in all the conditions. Environmental conditions such as heat, light, pests, and food availability can change suddenly at only one place. If variants were not there, the entire species would have been destroyed.

(b) What is meant by dominant genes and recessive genes? Give one example of each.

(c) Explain how, characteristics (or traits) are inherited through genes.

(a) Genes are units of heredity which transfer characteristics (or traits) from parents to their offsprings during reproduction. Genes are located in chromosomes.

(b) The gene which decides the appearance of an organism even in the presence of an alternative gene is known as dominant gene. The gene which can decide the appearance of an organism only in the presence of another identical gene is called a recessive gene. For example, in pea plants, the dominant gene for tallness is T and the recessive gene for dwarfism is t.

(a) Mendel conducted the experiments using or pea plant. He selected homozygous tall (TT) and dwarf (tt) pea plants. He crossed the tall pea plant with the dwarf pea plant. It was observed that the F1​ generation are all tall plants. Thus, it was concluded that the gene causing tallness is dominant while the gene causing dwarfness is recessive. The trait expressing itself in the hybrid is the dominant one. This experiment proves Mendel’s first law of inheritance. It states that when a pair of contrasting factors is brought in a hybrid, one factor inhibits the appearance of the other, one which inhibits is the dominant one and which is inhibited is recessive.

38. When two parents are crossed, the offspring are referred to as:
(a) recessives
(b) test cross
(c) F1 generation
(d) F2 generation

39. A cross between two individuals results in a ratio of 9 : 3 : 3 : 1 for four possible phenotypes of progeny. This is an example of a :
(a) dihybrid cross
(b) monohybrid cross
(c) test cross
(d) none of these

(c) pea plants
41. The human animal which has an XY pair of chromosomes is called:
(a) male
(b) hybrid
(c) female
(d) doomed

42. The science of heredity is known as:
(a) biology
(b) embryology
(c) genetics
(d) biochemistry

(d) part of a chromosome that transmits a trait

(b) let each variety self fertilize for several generations

46. In the human blood grouping, the four basic blood types are type A, type B, type AB, and type O. The blood proteins A and B are:
(a) simple dominant and recessive traits
(b) incomplete dominant traits
(c) codominant traits
(d) sex-linked traits

(a) allowing flowers on a parent plant to be self-pollinated
51. The following results were obtained by a scientist who crossed the F1 generation of pure-breeding parents for round and wrinkled seeds.

52. The visible characteristic in an organism is known as:
(a) prototype
(b) stereotype
(c) phenotype
(d) genotype

(c) 1 : 1
57. The two versions of a trait (character) which are brought in by the male and female gametes are situated on:
(a) copies of the same chromosome
(b) sex chromosomes
(c) two different chromosomes
(d) any chromosomes

(a) copies of the same chromosome

58. Select the statements that describe characteristics of genes :
(i) genes are specific sequence of bases in a DNA molecule
(ii) a gene does not code for proteins
(iii) in individuals of a given species, a specific gene is located on a particular chromosome
(iv) each chromosome has only one gene

59. Select the group which shares the maximum number of common characters:
(a) two individuals of a species
(b) two species of a genus
(c) two genera of a family
(d) two genera of two families

(d) the presence of a Y chromosome in a sperm
63. A zygote which has inherited an X chromosome from the father will develop into :
(a) baby boy
(b) baby girl
(c) adult
(d) either boy or girl