The environmental hazards include different kinds of pollution, global warming, some species getting extinct from the planet. The further consequences of this pollution are also mentioned in this chapter. This chapter also tells us how to control these hazards and how to prevent them. This chapter, in general, gives us the idea of how today’s young generation is exploiting the environment and how to deal with it. 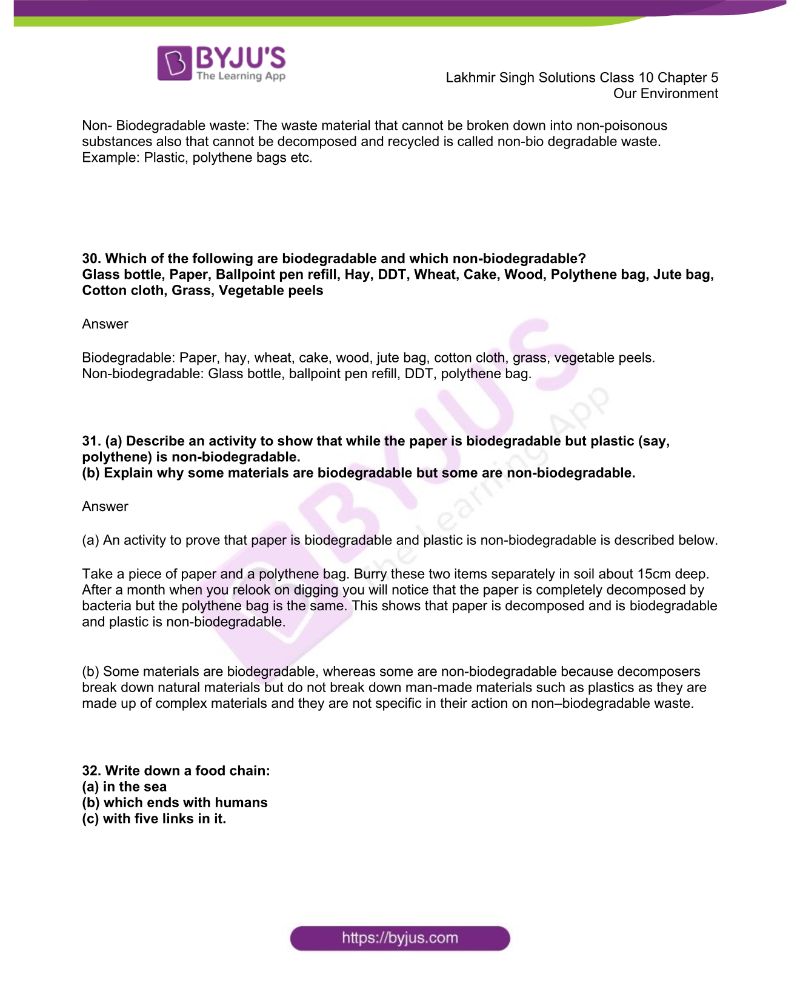 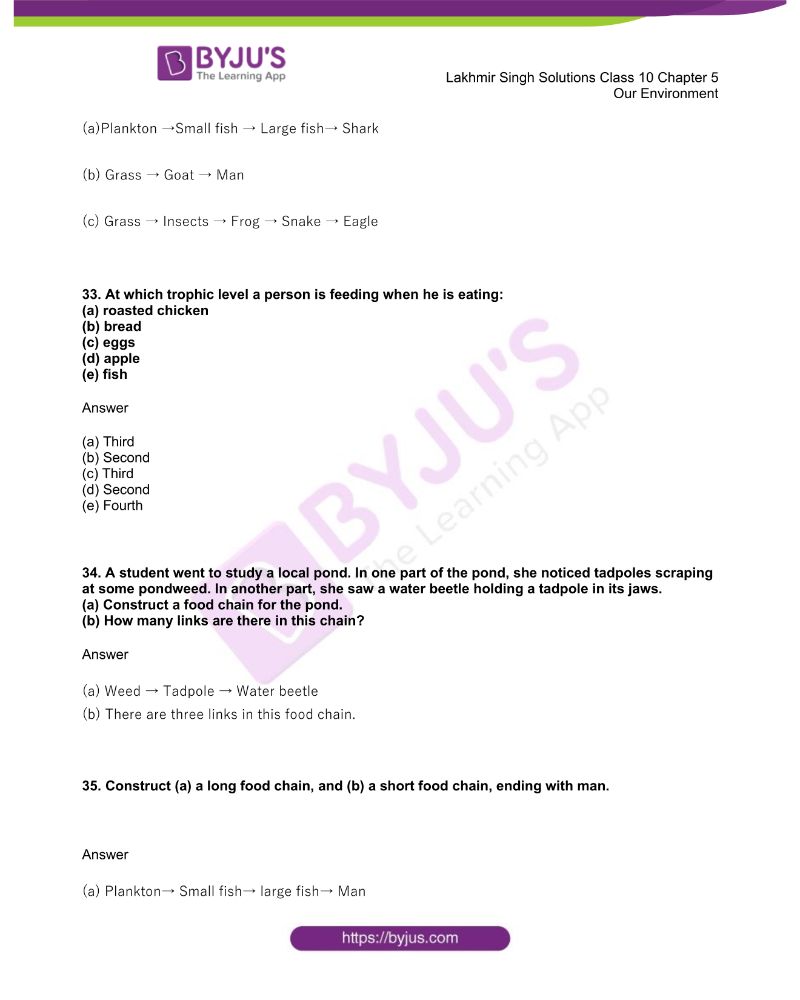 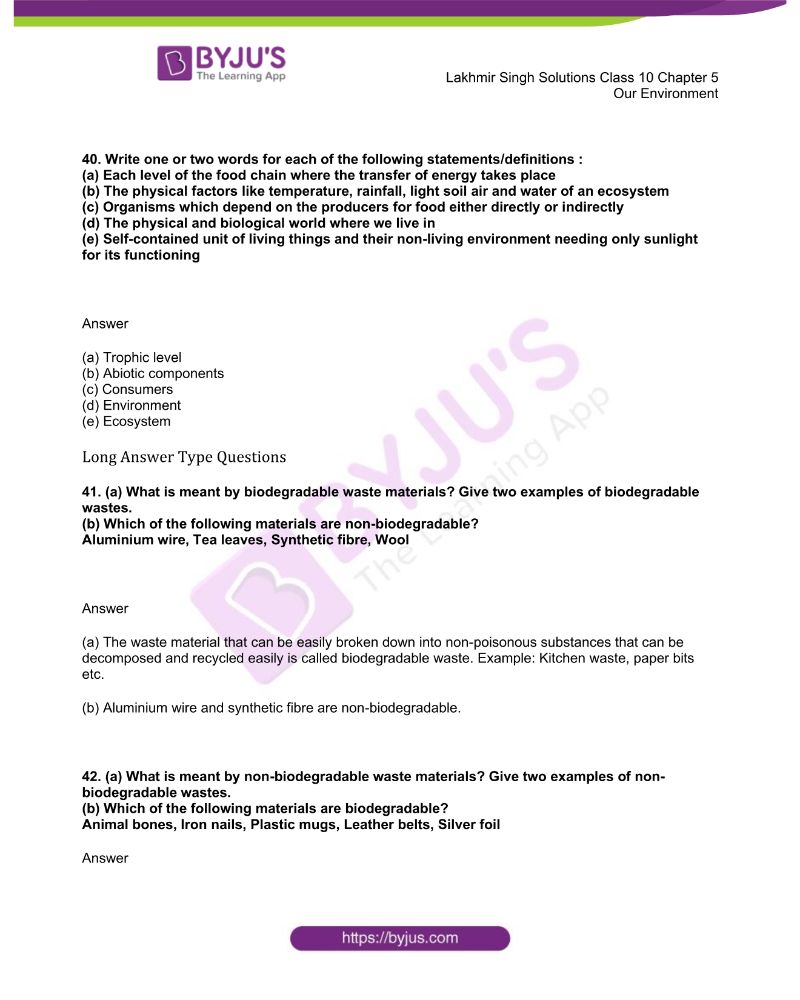 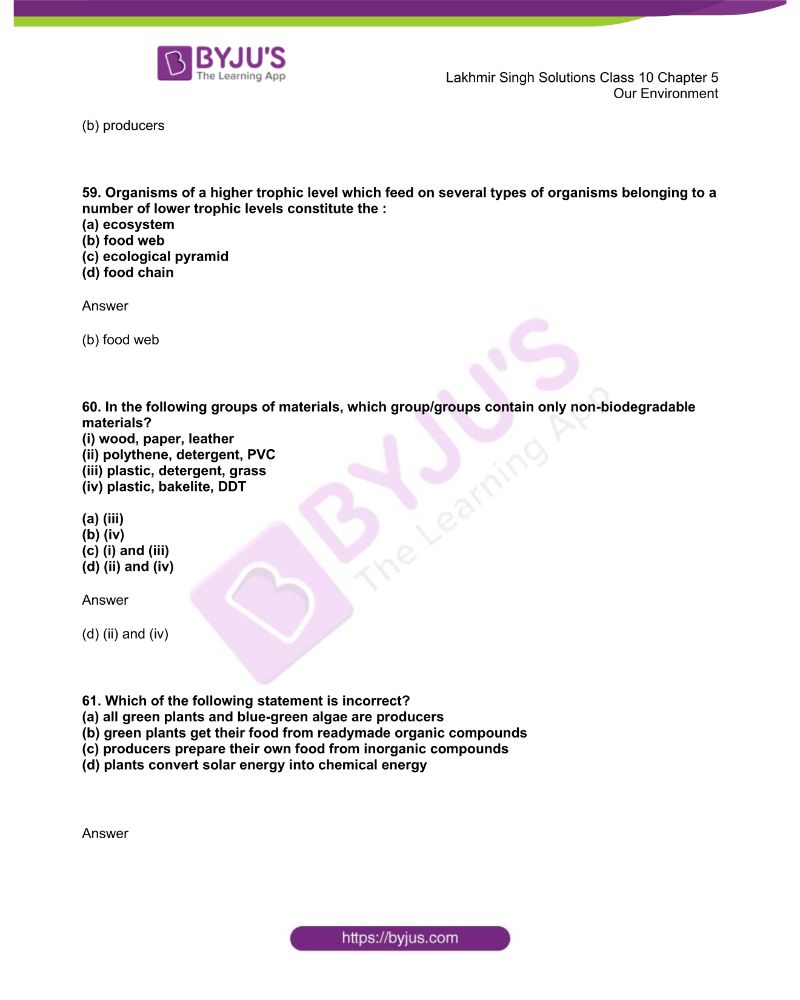 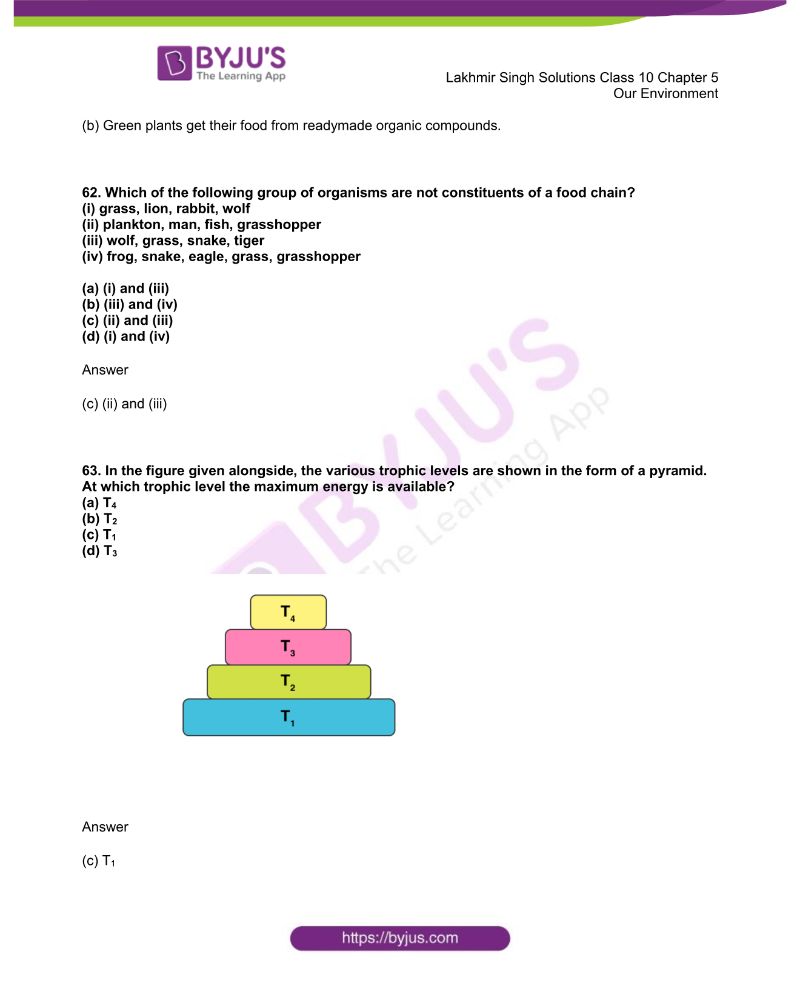 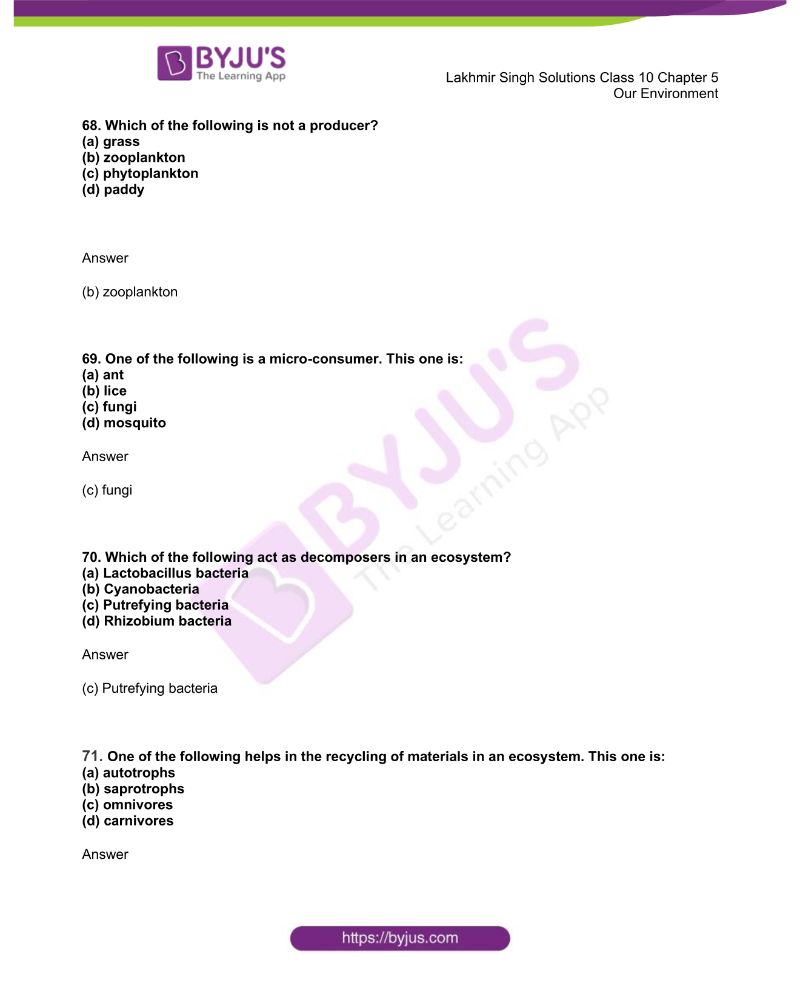 1. What is the functional unit of the environment comprising of the living and non-living components called?

The ecosystem is the functional unit of the environment consisting of living and non-living components.

3. Which one of the following is not a terrestrial ecosystem?
Forest, Grassland, Aquarium, Desert

An aquarium is not a terrestrial ecosystem.

4. Why are plants called producers?

Plants are known as producers because they prepare their own food by the process of photosynthesis.

5. What name has been given to those organisms which break down the complex organic compounds present in dead animals and plants?

Decomposers are the organisms that break down the complex organic compounds present in dead animals and plants.

The tiny herbivorous plants and animals present in water are known as plankton.

7. State whether the following statements are true or false :
(a) In biology, human beings are called producers.
(b) Secondary consumers and tertiary consumers, both are carnivores.

8. Which category of organisms forms the starting point of a food chain?

Green plants or producers form the starting point of a food chain.

9. Which of the following belong to the same trophic level?
Goat; Spider; Plants; Hawk; Rat

Goats and rats belong to the same trophic level.

10. Which of the following belong to the same trophic level?
Tree; Frog; Snake; Grass; Lizard

Trees and grass belong to the same trophic level.

12. Name the organisms belonging to the second and the fourth trophic levels in the food chain comprising the following:
Frogs, Plants, Snakes, Hawk, Insects

13. What are the various steps of the food chain called?

The various steps of a food chain are called trophic levels.

16. Which organisms belong to third and fourth trophic levels in the food chain comprising the following?
Rats, Plants, Hawk, Snakes

17. Which one term in the following includes the others?
Air, flora, fauna, environment, water, sunlight, soil

Environment is the term that includes air, flora, fauna, water, sunlight and soil.

18. A food chain represents a unidirectional flow of X. What is X?

(a) Decomposer organisms are specific in their action.

(b) In nature, all green plants are producers, whereas animals are consumers.

(c) A series of organisms, each of which feeds on the next organism, the beginning of which is a green plant, is called a food chain.

(d) The science that deals with the inter-relationships of living things with one another and their environment is called ecology.

20. Explain the terms ‘producer’ and ‘consumer’. Give two examples of producers and two of consumers.

Organisms that produce their own food from available raw materials like water and carbon dioxide are called producers. Example: green plants

Organisms that depend on food prepared by producers are called consumers. Example: animals

(a) Micro-organisms that break down the complex organic compounds present in dead plants and animals and their products, such as faeces and urine, into simpler substances are called decomposers. Bacteria are decomposers.

(b) Decomposers decompose dead plants and animals and keep the environment clean and fresh.

22. What is meant by a primary consumer, secondary consumer and a tertiary consumer? Give one example of each.

The consumers that feed on the producers that are on plants are called primary consumers. Example: Insects.

23. Give an example of a four-step food chain operating in grassland. Name the secondary consumer in this food chain

The secondary consumer in this food chain is the butterfly

(a) The various steps in a food chain at which the transfer of food and energy takes place are known as trophic levels.

A food chain with four trophic levels can be shown as follows.

27. Consider the food chain :
Grass → Deer → Lion
What will happen if all the lions are removed from the above food chain?

If all the lions are removed from the above food chain, the population of deer will increase greatly, as there will be no lion to consume them as food. Then the density of grass will decrease due to overconsumption by a large number of deer.

28. The number of malaria patients in a village increased tremendously when a large number of frogs were exported from the village. What could be the cause for it?

Take a piece of paper and a polythene bag. Burry these two items separately in soil about 15cm deep. After a month when you relook on digging you will notice that the paper is completely decomposed by bacteria but the polythene bag is the same. This shows that paper is decomposed and is biodegradable and plastic is non-biodegradable.

34. A student went to study a local pond. In one part of the pond, she noticed tadpoles scraping at some pondweed. In another part, she saw a water beetle holding a tadpole in its jaws.
(a) Construct a food chain for the pond.
(b) How many links are there in this chain?

(b) There are three links in this food chain.

36. (a) State one advantage of using jute bags over plastic bags for shopping.
(b) Write a common food chain of a pond ecosystem having four links.

(a) Jute bags are biodegradable, and can be easily recycled and reused but in the case of plastic bags, it is not the same. Plastic is a non-biodegradable substance it cannot be decomposed and degraded. The disposal of jute bags is much easier as compared to plastic.

37. We do not clean ponds or lakes but an aquarium needs to be cleaned periodically. Why?

38. What will be the consequence of the absence of decomposers in the ecosystem?

Decomposers play a vital role in the ecosystem. The key role of decomposers is to cleanse the environment. They decompose the waste generated in water bodies and also help to restore the nutrients present in the soil. If there were no decomposers in the ecosystem, then dead plants and animals would remain as such, and their elements would never be returned to the soil, air and water.

39. Give two differences between food chain and food web.

Food chain is the chain of living organisms in a group where one organism is dependent on others for food. The flow of energy is unidirectional.

Food web is the interconnected group of food chain living in the same ecosystem. This involves the chain of various species in the same category. The flow of energy is multi-directional.

40. Write one or two words for each of the following statements/definitions :
(a) Each level of the food chain where the transfer of energy takes place
(b) The physical factors like temperature, rainfall, light soil air and water of an ecosystem
(c) Organisms which depend on the producers for food either directly or indirectly
(d) The physical and biological world where we live in
(e) Self-contained unit of living things and their non-living environment needing only sunlight for its functioning

(a) The waste material that can be easily broken down into non-poisonous substances that can be decomposed and recycled easily is called biodegradable waste. Example: Kitchen waste, paper bits etc.

(b) Aluminium wire and synthetic fibre are non-biodegradable.

(a) The waste material that cannot be broken down into non-poisonous substances also that cannot be decomposed and recycled is called non-biodegradable waste. Example: Plastic, polythene bags etc.

(b) Animal bones and leather belts are biodegradable wastes.

43. (a) Define an ecosystem. Give examples of any two ecosystems.
(b) List the biotic and abiotic components of an ecosystem.

(a) An ecosystem includes all of the living things (plants, animals, and organisms) in a given area that interact with each other, as well as the non-living environments (weather, earth, sun, soil, climate, and atmosphere) that surround the living things.

Marine ecosystem: A marine ecosystem is a land-based community of organisms and the interactions of biotic and abiotic components in a given water body. Example Pond

(b) The biotic components of an ecosystem are the plants, animals and decomposers present in it.

The abiotic components of an ecosystem are air, water and soil.

(a) Food chain is the chain of living organisms in a group where one organism is dependent on others for food. The flow of energy is unidirectional.

(b) Food web is the interconnected group of food chain living in the same ecosystem. This involves the chain of various species in the same category. The flow of energy is multi-directional. The formation of a food web is shown in the diagram below 45. (a) What is meant by ‘environment’?
(b) What type of substances are the major pollutants of the environment? Name two such substances.
(c) Name the organisms whose uncontrolled activities are damaging the environment.
(d) Explain why it is better to use paper bags than plastic bags.

(a) The environment is everything that is around us which can be living or nonliving things. It includes physical, chemical and other natural forces. Natural Environment comprises land, water, air, plants and animals.

(c) Human beings are organisms whose uncontrolled activities are damaging the environment.

(d) Paper bags are biodegradable, and can be easily recycled and reused but in the case of plastic bags, it is not the same. Plastic is a non-biodegradable substance it cannot be decomposed and degraded. The disposal of paper bags is much easier as compared to plastic.

46. Which of the following constitutes a food chain?
(a) Grass, Wheat and Mango
(b) Grass, Goat and Human
(c) Goat, Cow and Elephant
(d) Grass, Fish and Goat

(b) Grass, goat and human

47. In a food chain, the initial organism is usually:
(a) photosynthetic
(b) herbivore
(c) saprophytic
(d) parasitic

48. Which of the following represents a possible food chain found in a pond :

49. Which of the following are decomposers of dead organisms?

50. Which of the following is an artificial ecosystem?
(a) pond
(b) crop field
(c) lake
(d) forest

(d) they are made of non-biodegradable materials

52. In a food chain, the third trophic level is always occupied by:
(a) carnivores
(b) herbivores
(c) decomposers
(d) producers

53. Accumulation of non-biodegradable pesticides in the food chain in increasing amount at each higher trophic level is known as:
(a) eutrophication
(b) pollution
(c) biomagnification
(d) accumulation

57. What will happen if deer is missing in the food chain given below?

(a) The population of tigers increases

(b) the population of grass decreases

(d) The population of tigers decreases and the density of grass increases.

59. Organisms of a higher trophic level which feed on several types of organisms belonging to a number of lower trophic levels constitute the :
(a) ecosystem
(b) food web
(c) ecological pyramid
(d) food chain

(b) Green plants get their food from readymade organic compounds.

63. In the figure given alongside, the various trophic levels are shown in the form of a pyramid. At which trophic level the maximum energy is available?
(a) T4
(b) T2
(c) T1
(d) T3

64. One of the following is not a biodegradable material. This one is:
(a) cotton
(b) animal bones
(c) aluminium foil
(d) wood

65. Which of the following is not a non-biodegradable material?
(a) nylon socks
(b) plastic school bag
(c) jute carry bag
(d) polyester clothes

68. Which of the following is not a producer?
(a) grass
(b) zooplankton
(c) phytoplankton
(d) paddy

70. Which of the following act as decomposers in an ecosystem?
(a) Lactobacillus bacteria
(b) Cyanobacteria
(c) Putrefying bacteria
(d) Rhizobium bacteria

71. One of the following helps in the recycling of materials in an ecosystem. This one is:
(a) autotrophs
(b) saprotrophs
(c) omnivores
(d) carnivores

72. In the food chain comprising of a snake, grass, insect, and frog, the secondary consumer is :
(a) insect
(b) snake
(c) frog
(d) grass