All our life needs are based on the energy we produce and also on the energy we consume. Here, in this chapter, we will discuss the kinds of fuels, natural resources, renewable and non-renewable resources. Further, we also learn the different characteristics of fuels like coal, petroleum, petrol and diesel.

We also get knowledge about the properties of ideal fuel, how it is made, how much percentage of the fuel is consumed and how long it will last. The conservation and judicious utilization of all these resources are explained in a precise manner. This chapter also highlights the key points of energy preservation and conservation for the upcoming generation in the future. 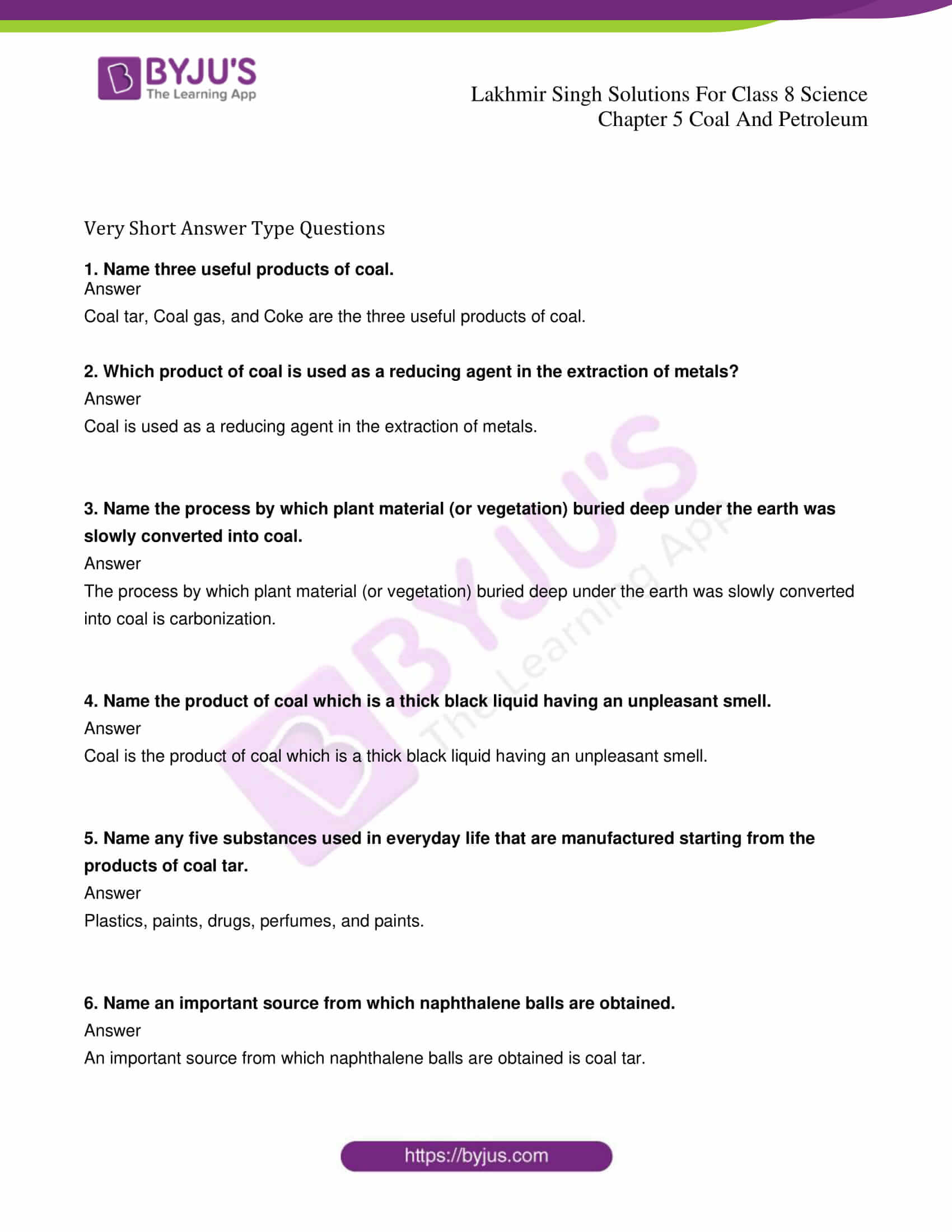 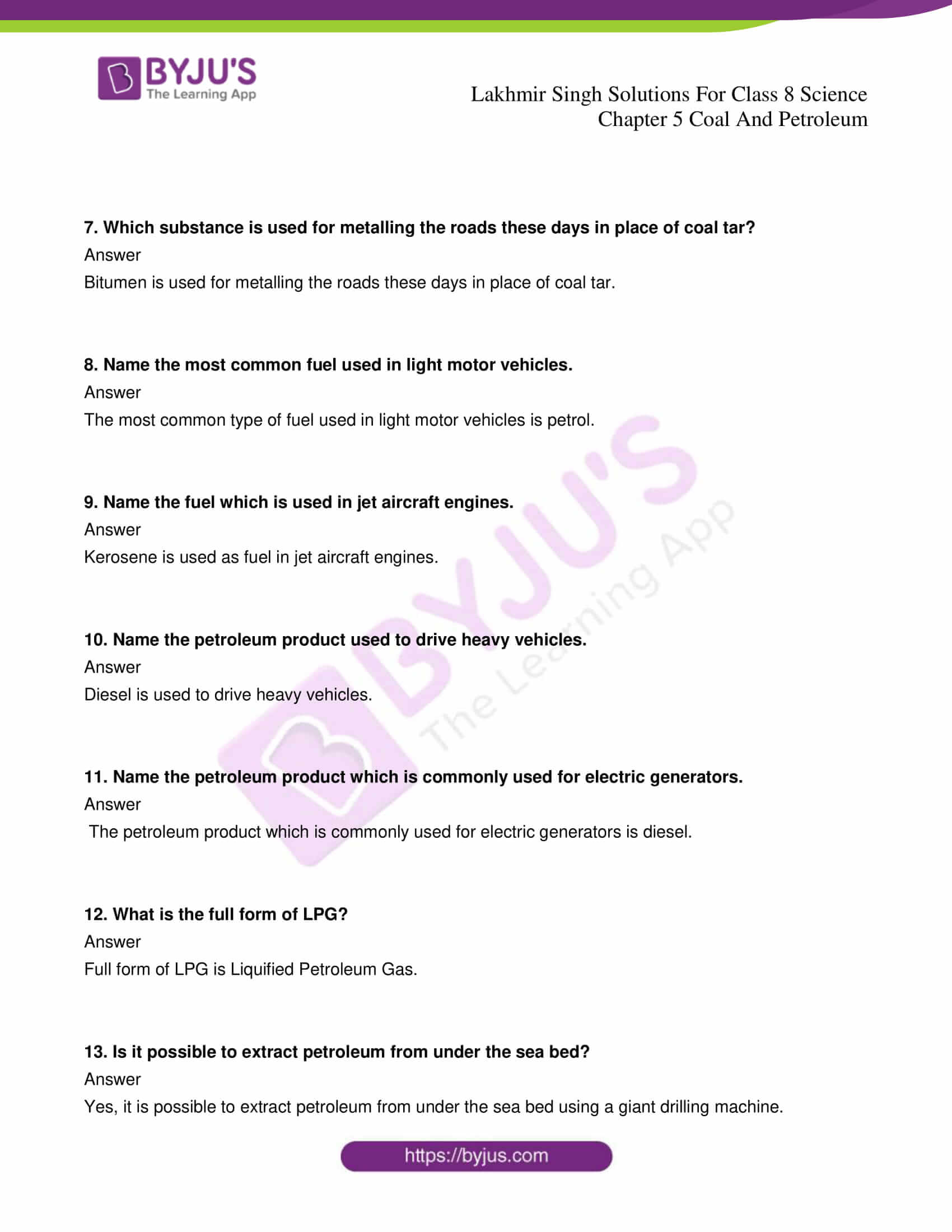 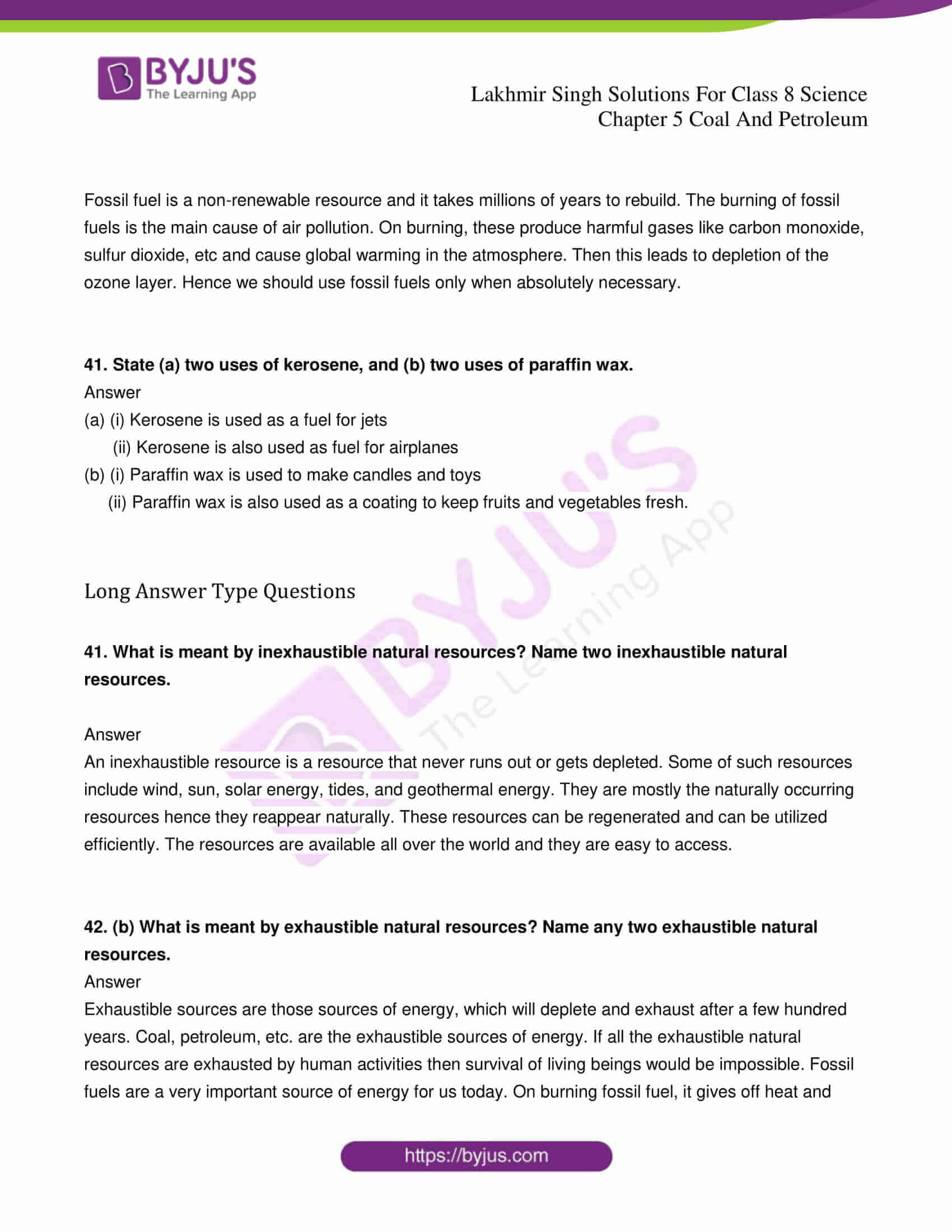 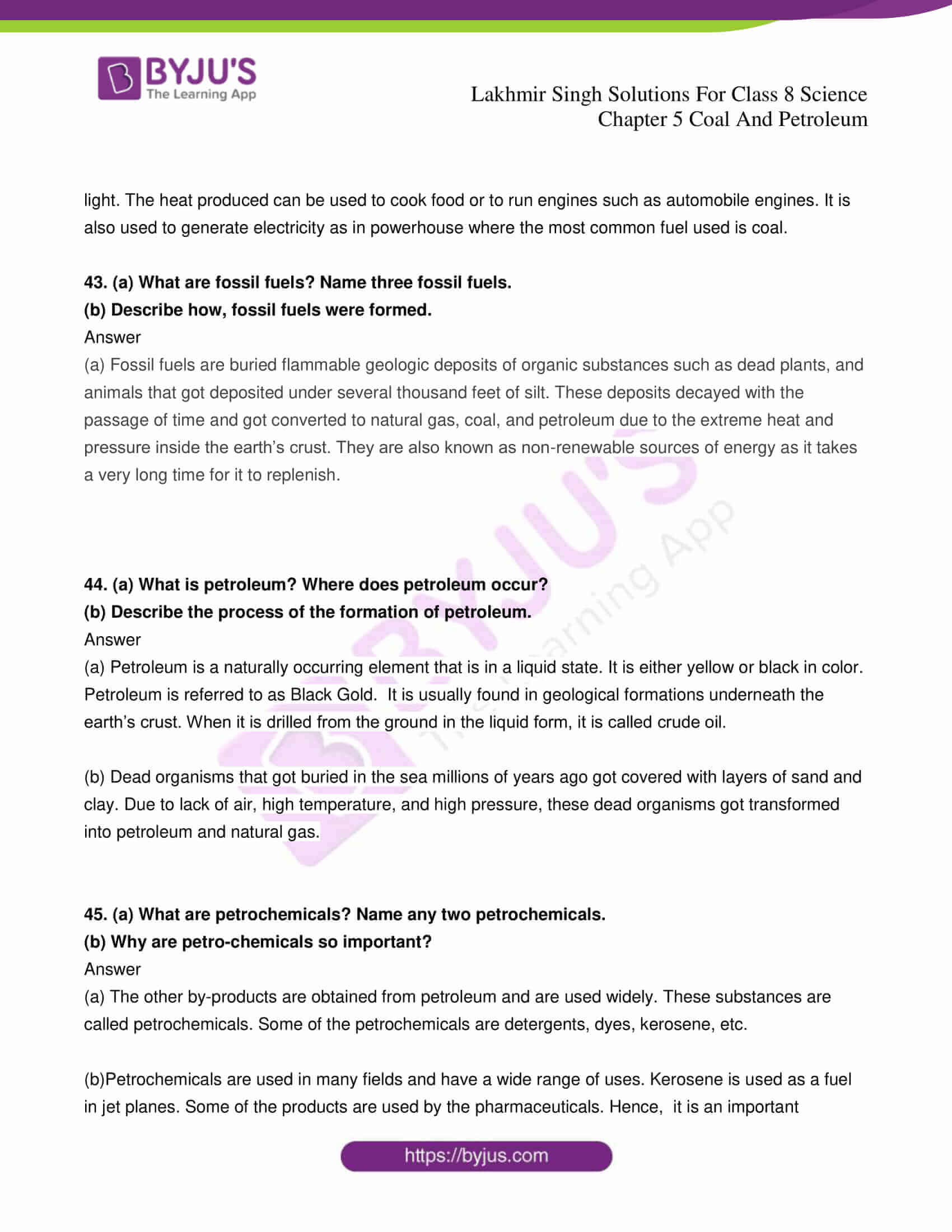 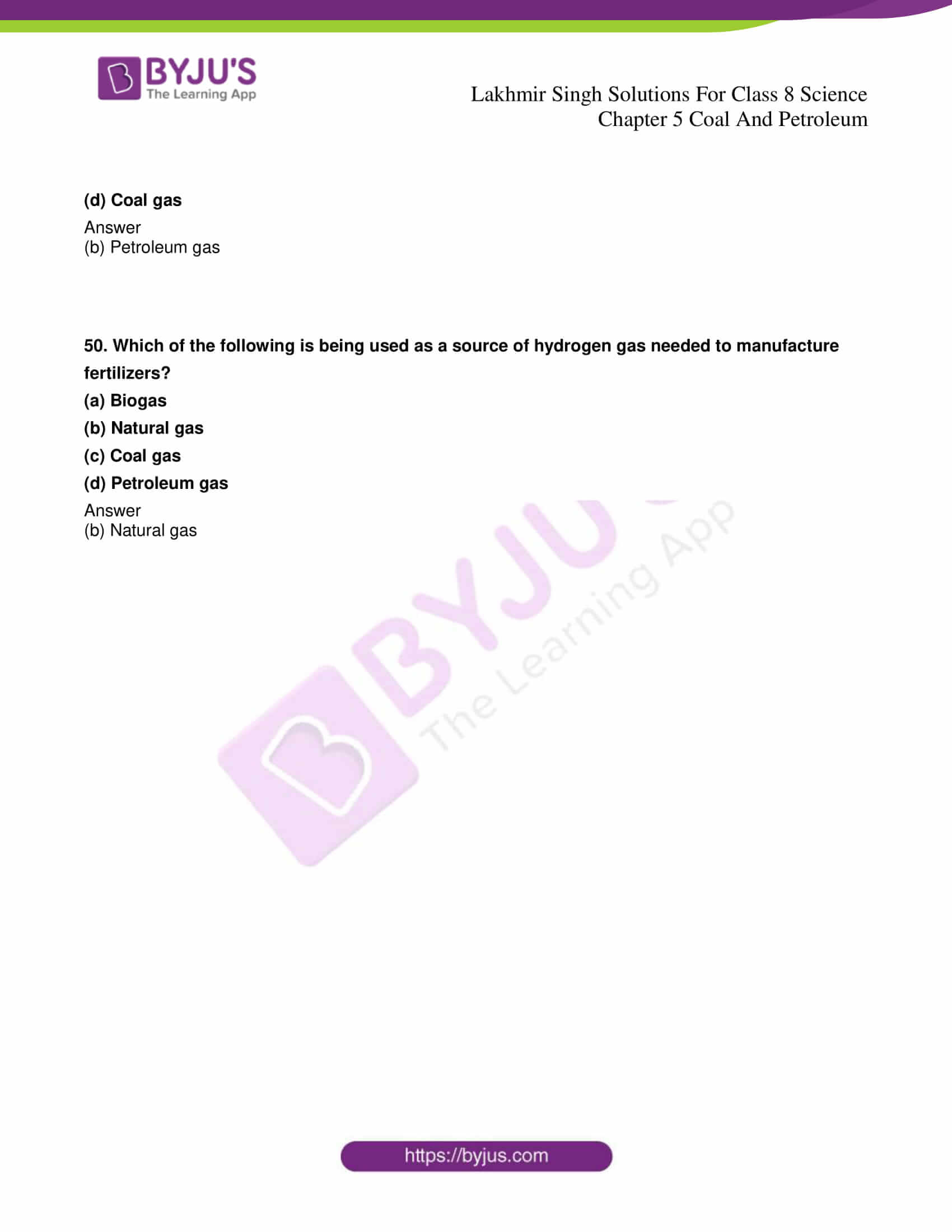 Coal tar, Coal gas, and Coke are the three useful products of coal.

2. Which product of coal is used as a reducing agent in the extraction of metals?

Coal is used as a reducing agent in the extraction of metals.

3. Name the process by which plant material (or vegetation) buried deep under the earth was slowly converted into coal.

The process by which plant material (or vegetation) buried deep under the earth was slowly converted into coal is carbonization.

4. Name the product of coal which is a thick black liquid having an unpleasant smell.

Coal is the product of coal which is a thick black liquid having an unpleasant smell.

5. Name any five substances used in everyday life that are manufactured starting from the products of coal tar.

6. Name an important source from which naphthalene balls are obtained.

An important source from which naphthalene balls are obtained is coal tar.

7. Which substance is used for metalling the roads these days in place of coal tar?

Bitumen is used for metalling the roads these days in place of coal tar.

8. Name the most common fuel used in light motor vehicles.

The most common type of fuel used in light motor vehicles is petrol.

9. Name the fuel which is used in jet aircraft engines.

Kerosene is used as fuel in jet aircraft engines.

11. Name the petroleum product which is commonly used for electric generators.

The petroleum product which is commonly used for electric generators is diesel.

13. Is it possible to extract petroleum from under the sea bed?

Yes, it is possible to extract petroleum from under the sea bed using a giant drilling machine.

The major component of natural gas is Methane.

16. Name any two places in India where natural gas is found.

Maharashtra and Tripura are the two places in India where natural gas is found.

17. Name a fossil fuel other than coal and petroleum.

A fossil fuel other than coal and petroleum is natural gas.

18. Name two places in India where coal is found.

19. Name the petroleum product used for surfacing of roads.

The petroleum product used for surfacing of roads is Bitumen.

20. Name any four places in India where petroleum is found.

Assam, Gujarat, Mumbai high and river basins of Godavari and Krishna are the places in India where petroleum is found.

22. State whether the following statements are true or false

(a) Coke is almost pure from carbon.

(b) Coal tar is a mixture of various substances.

(c) Kerosene is not a fossil fuel.

(e) Fossil fuels can be made in the laboratory.

23. Fill in the following blanks with suitable words

(d) The process of separation of different constituents from petroleum is____________

(a) Fossil fuels are coal, petroleum, and natural gas.

(c) The slow process of conversion of dead vegetation into coal is called carbonisation.

(d) The process of separation of different constituents from petroleum is refining.

(e) The least polluting fuel for vehicle is CNG

25. Describe how coal was formed. What is this process called?

Dense forests got buried under the soil due to natural processes, millions of years ago. More and more soil got deposited over them and they got compressed more. This led them to get exposed to very high temperature and pressure. They slowly got converted into coal under these extreme conditions. The whole process of the formation of coal from dead vegetation is known as carbonization.

26. What happens when coal is heated in the air? State the uses of coal.

If coal is heated in the presence of air, then coal burns to produce mainly carbon dioxide gas, and no other useful products are obtained. It is a gaseous fuel that is obtained by the strong heating of coal in the absence of air during the processing of coal to get a coke.

i) In the manufacture of steel.

ii) In the extraction of metals (as a reducing agent).

28. What are the constituents of coal gas? State one use of coal gas.

Coal gas is obtained as a byproduct while producing coke. Its smell is not very pleasant. It is a highly flammable gas as the main component of it is methane. Thus, if not regulated carefully, it can form a mixture with air resulting in explosions.

29. What are the major products (or fractions) of petroleum refining? Give one use of each petroleum product.

The major products (or fractions) of petroleum refining are:

30. What are the advantages of using natural gas (or CNG) as a fuel?

The advantages of using natural gas (or CNG ) as a fuel are:

Compressed Natural Gas (CNG) is a fuel source that is made from compressing natural gas to less than 1% of its standard atmospheric volume, or 3,600 PSI. CNG can be used in place of gasoline or diesel in any vehicle with a CNG conversion kit available or CNG engine.

Natural gas is found in deep underground rock formations or near petroleum or coal reservoirs. It is called clean fuel because:

34. What are the advantages of using LPG as fuel?

The advantages of using LPG as fuels are as follows

35. Name any five useful substances which are manufactured from petrochemicals.

Useful substances which are manufactured from petrochemicals are Detergents, Dyes,

Plastics, Paints, and some raw materials for pharmaceutical companies.

36. Which material is called ‘black gold’? why?

Petroleum is referred to as Black Gold. It is used to manufacture various products such as pharmaceuticals, plastics, gasoline, synthetic fabrics, etc so it is called black gold.

37. (a) Where and when was the world’s first oil well drilled?

(b) Where and when was oil first struck in India?

(b) in 1867, oil was struck at Makum in Assam. In India, oil is found in Assam, Gujarat, Mumbai High, and in the river basins of Godavari and Krishna.

38. State one use each of the following products of petroleum: (a) petroleum gas, (b) petrol, (c) Diesel, (d) Lubricating oil, (e) Bitumen

(a) LPG is used in households as well as in the industry.

(b) Petrol is used as fuels for vehicles

(e) Bitumen or asphalt is mainly used to surface roads.

39. What is the major cause of air pollution? Write the various tips for minimizing the wastage of petrol/diesel while driving vehicles.

The burning of fossil fuels is the main cause of air pollution. On burning, these produce harmful gases like carbon monoxide, sulfur dioxide, etc and cause global warming in the atmosphere. Then this leads to depletion of the ozone layer.

Tips for minimizing the wastage of vehicles:

40. Why should we use fossil fuels only when absolutely necessary?

Fossil fuel is a non-renewable resource and it takes millions of years to rebuild. The burning of fossil fuels is the main cause of air pollution. On burning, these produce harmful gases like carbon monoxide, sulfur dioxide, etc and cause global warming in the atmosphere. Then this leads to depletion of the ozone layer. Hence we should use fossil fuels only when absolutely necessary.

(ii) Kerosene is also used as fuel for airplanes

(b) (i) Paraffin wax is used to make candles and toys

(ii) Paraffin wax is also used as a coating to keep fruits and vegetables fresh.

An inexhaustible resource is a resource that never runs out or gets depleted. Some of such resources include wind, sun, solar energy, tides, and geothermal energy. They are mostly the naturally occurring resources hence they reappear naturally. These resources can be regenerated and can be utilized efficiently. The resources are available all over the world and they are easy to access.

Exhaustible sources are those sources of energy, which will deplete and exhaust after a few hundred years. Coal, petroleum, etc. are the exhaustible sources of energy. If all the exhaustible natural resources are exhausted by human activities then survival of living beings would be impossible. Fossil fuels are a very important source of energy for us today. On burning fossil fuel, it gives off heat and light. The heat produced can be used to cook food or to run engines such as automobile engines. It is also used to generate electricity as in powerhouse where the most common fuel used is coal.

(b) Describe how, fossil fuels were formed.

(a) Fossil fuels are buried flammable geologic deposits of organic substances such as dead plants, and animals that got deposited under several thousand feet of silt. These deposits decayed with the passage of time and got converted to natural gas, coal, and petroleum due to the extreme heat and pressure inside the earth’s crust. They are also known as non-renewable sources of energy as it takes a very long time for it to replenish.

44. (a) What is petroleum? Where does petroleum occur?

(b) Describe the process of the formation of petroleum.

(a) Petroleum is a naturally occurring element that is in a liquid state. It is either yellow or black in color. Petroleum is referred to as Black Gold. It is usually found in geological formations underneath the earth’s crust. When it is drilled from the ground in the liquid form, it is called crude oil.

(b) Dead organisms that got buried in the sea millions of years ago got covered with layers of sand and clay. Due to lack of air, high temperature, and high pressure, these dead organisms got transformed into petroleum and natural gas.

(b) Why are petro-chemicals so important?

(a) The other by-products are obtained from petroleum and are used widely. These substances are called petrochemicals. Some of the petrochemicals are detergents, dyes, kerosene, etc.

(b)Petrochemicals are used in many fields and have a wide range of uses. Kerosene is used as a fuel in jet planes. Some of the products are used by the pharmaceuticals. Hence, it is an important substance across society, politics, technology including in economy

46. Which one of the following is not a fossil fuel?

47. The major component of LPG is:

48. Which is the major component of CNG?

49. The gas which occurs above the petroleum oil trapped under the rocks is called:

50. Which of the following is being used as a source of hydrogen gas needed to manufacture fertilizers?