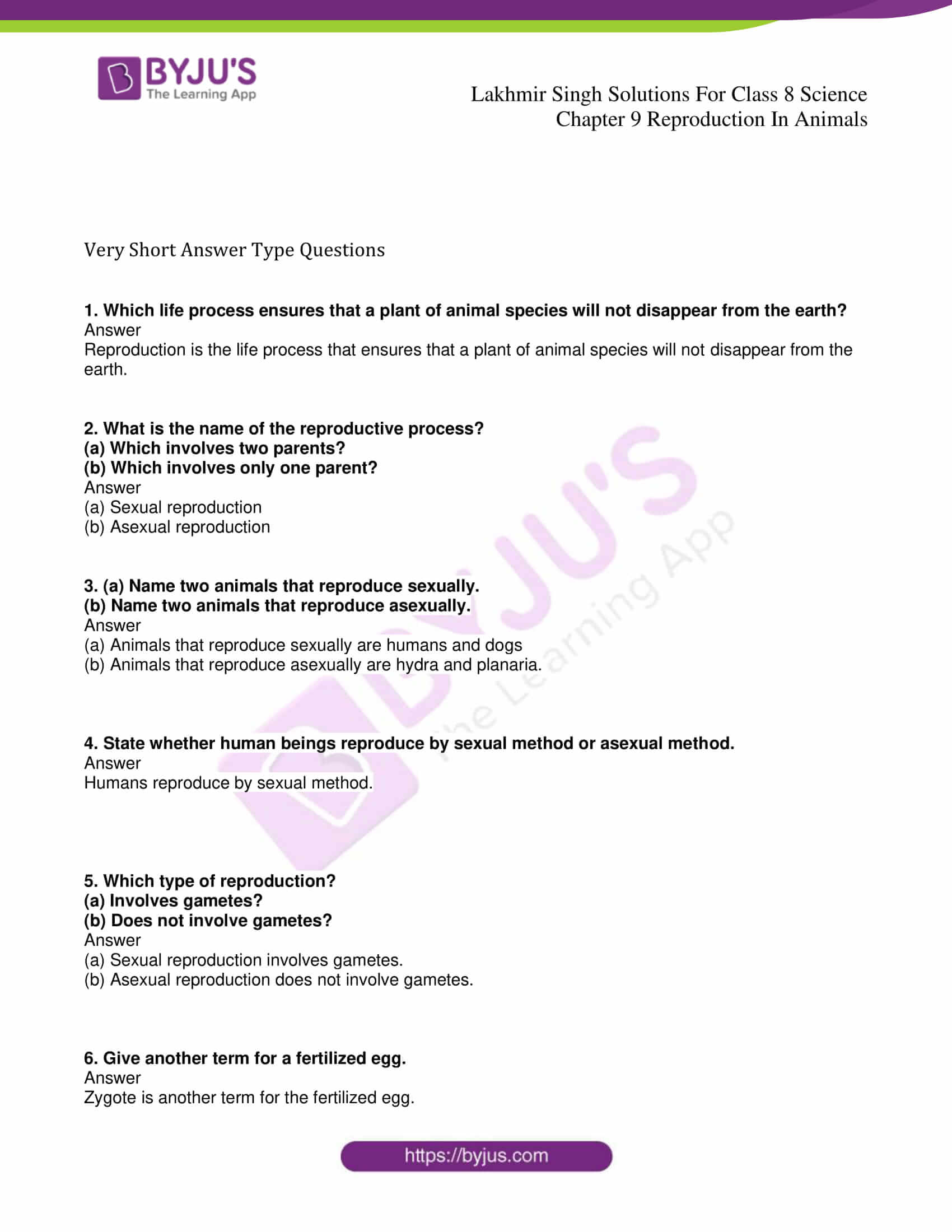 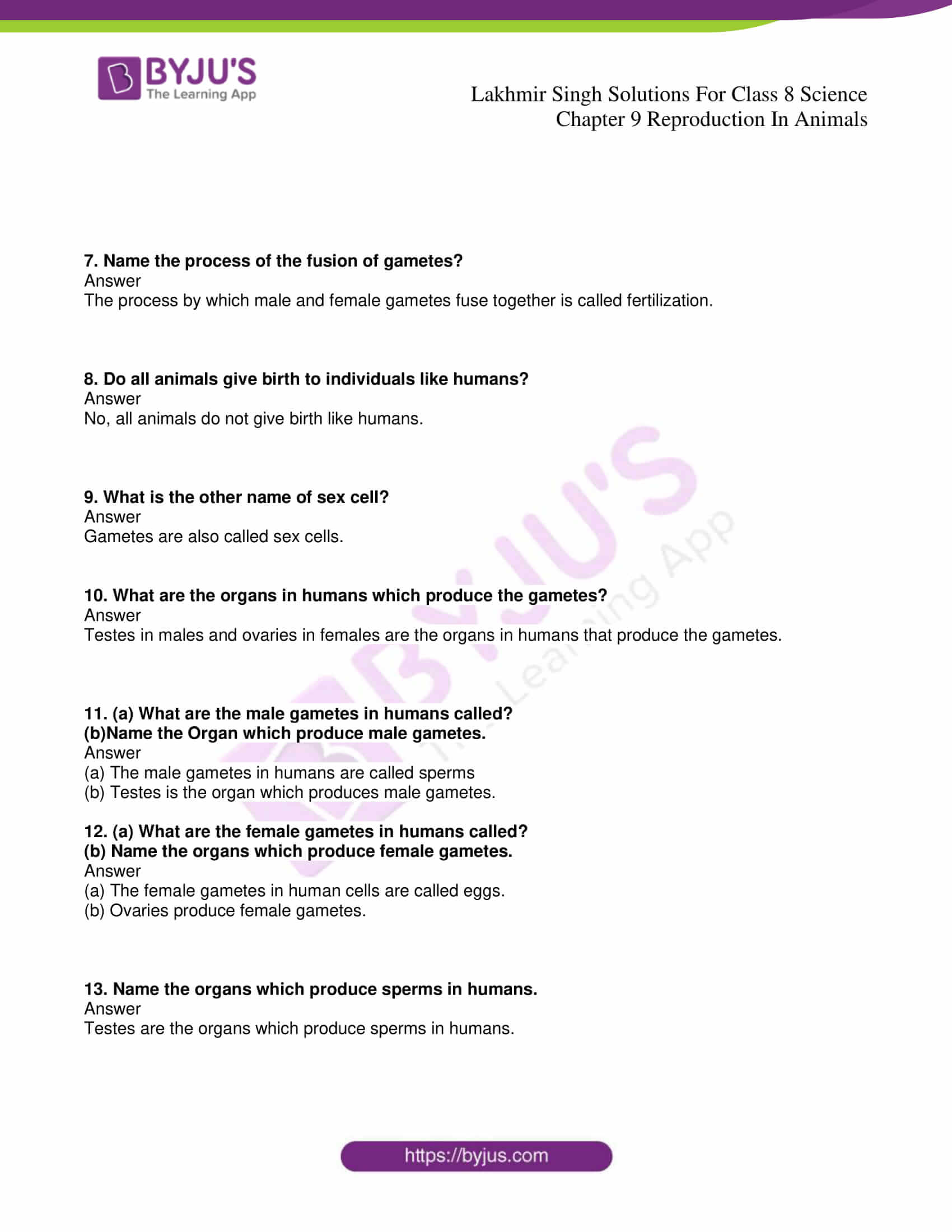 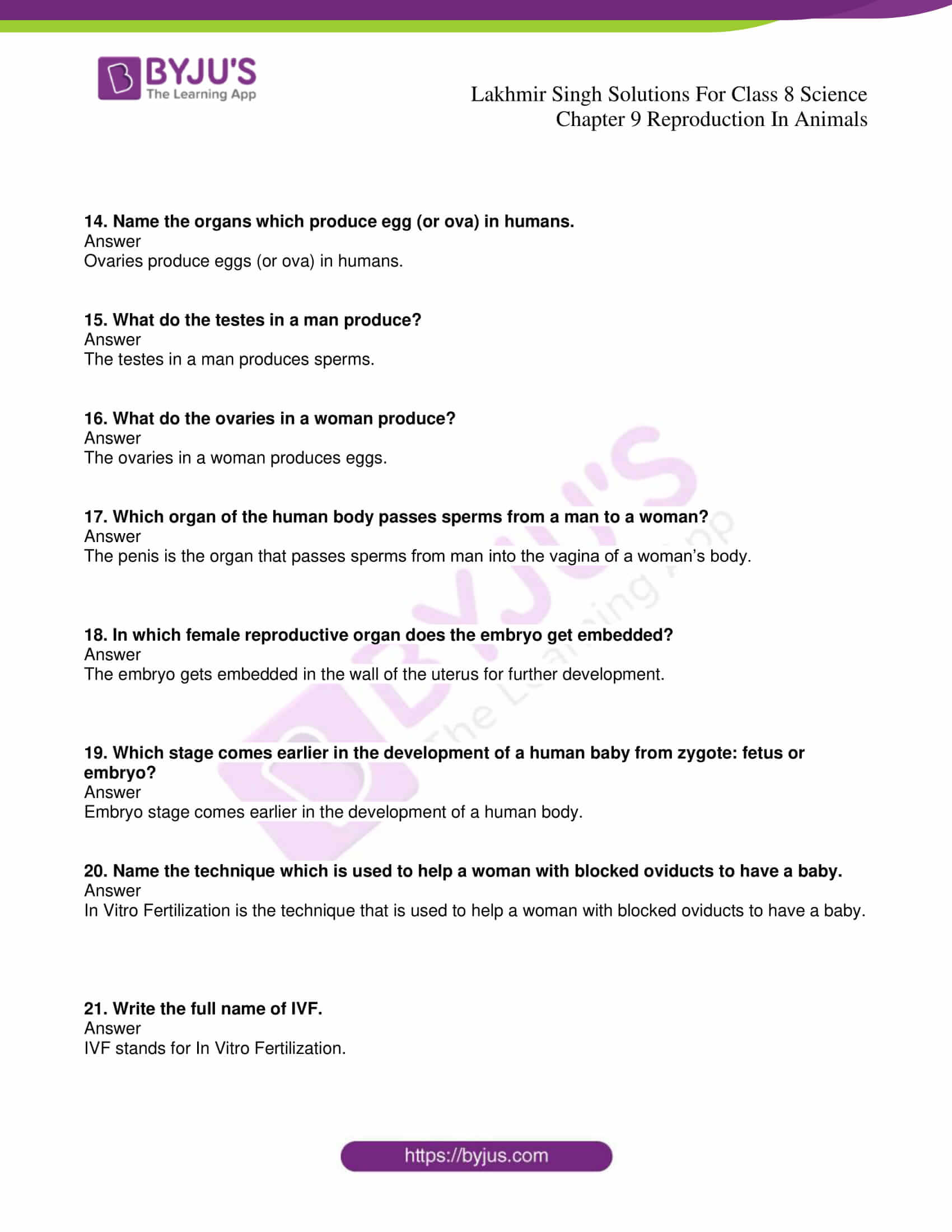 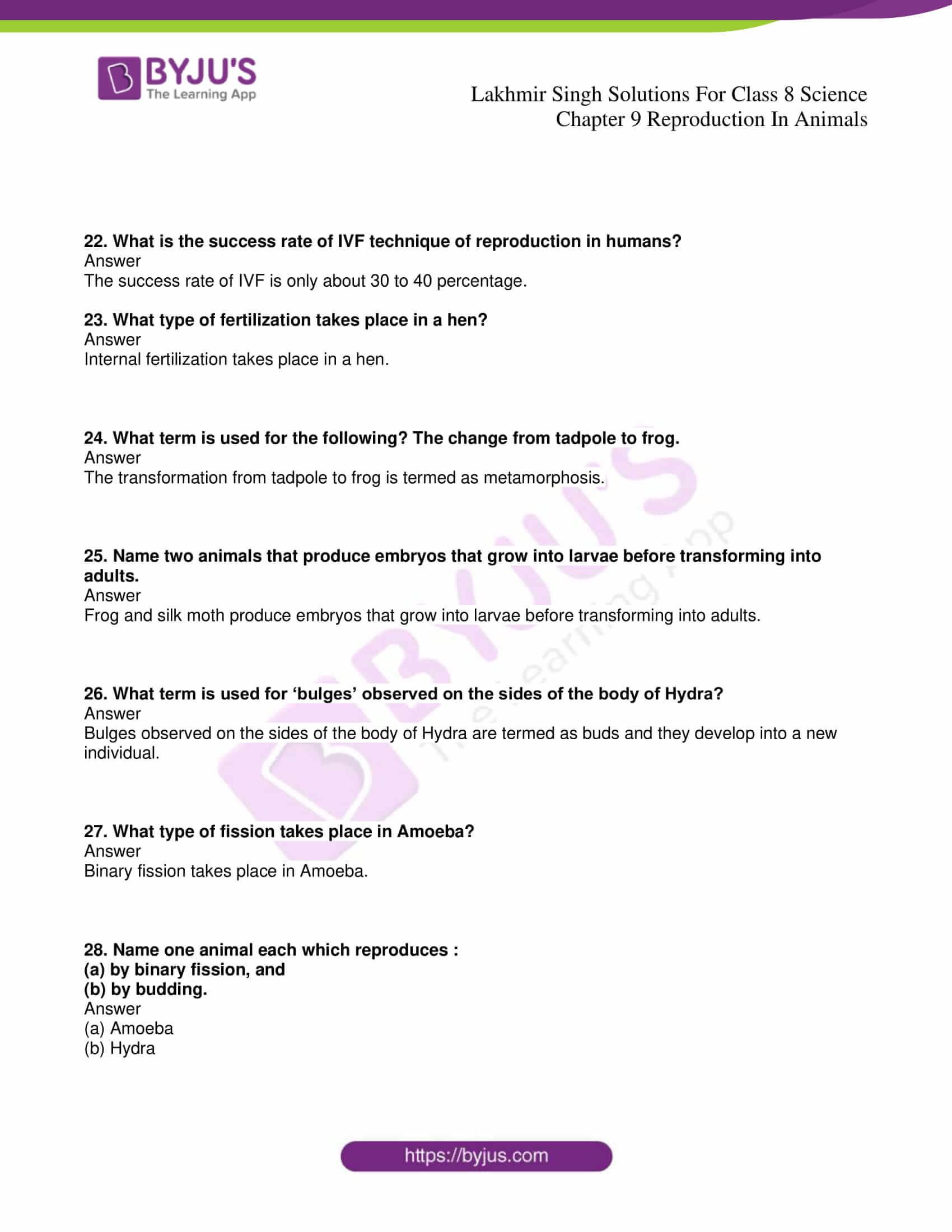 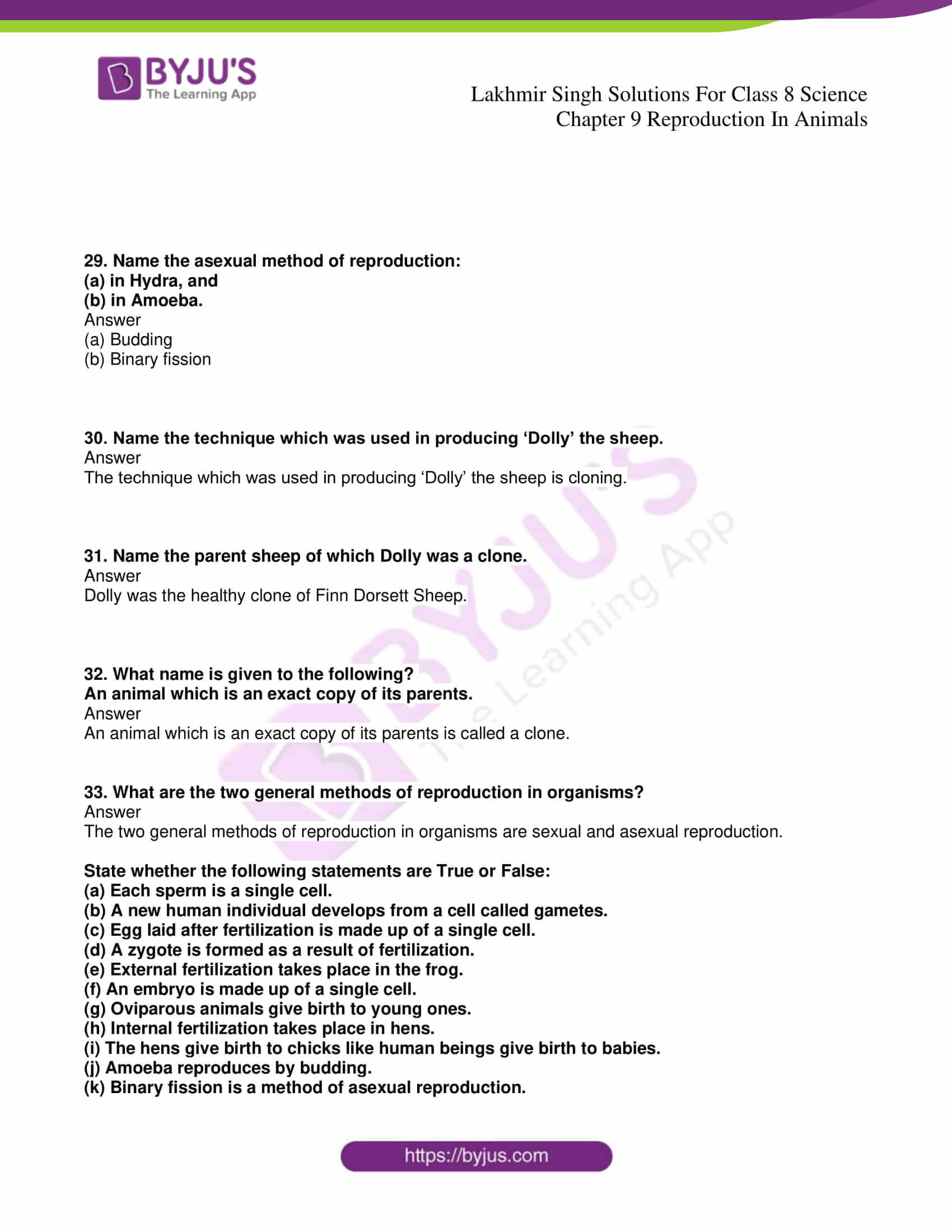 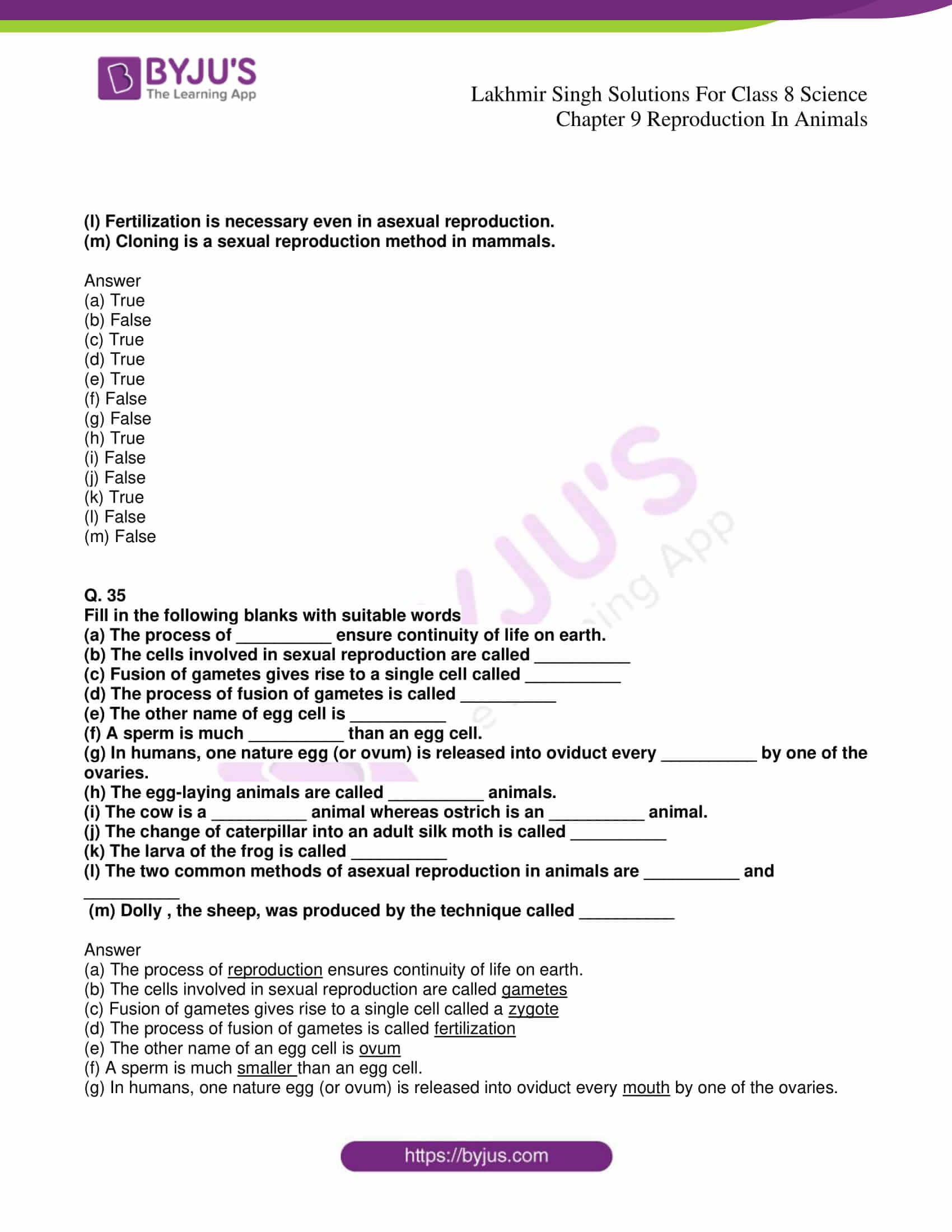 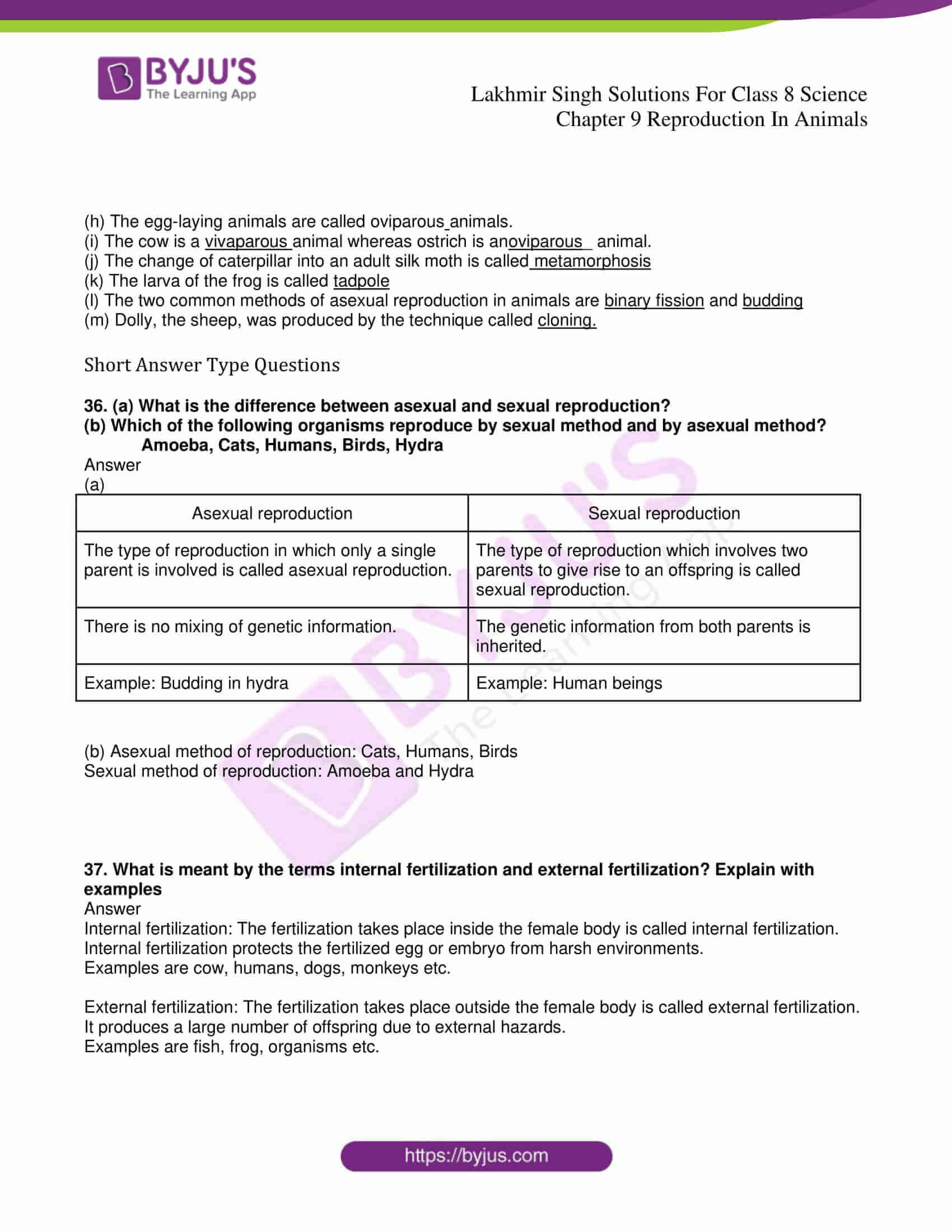 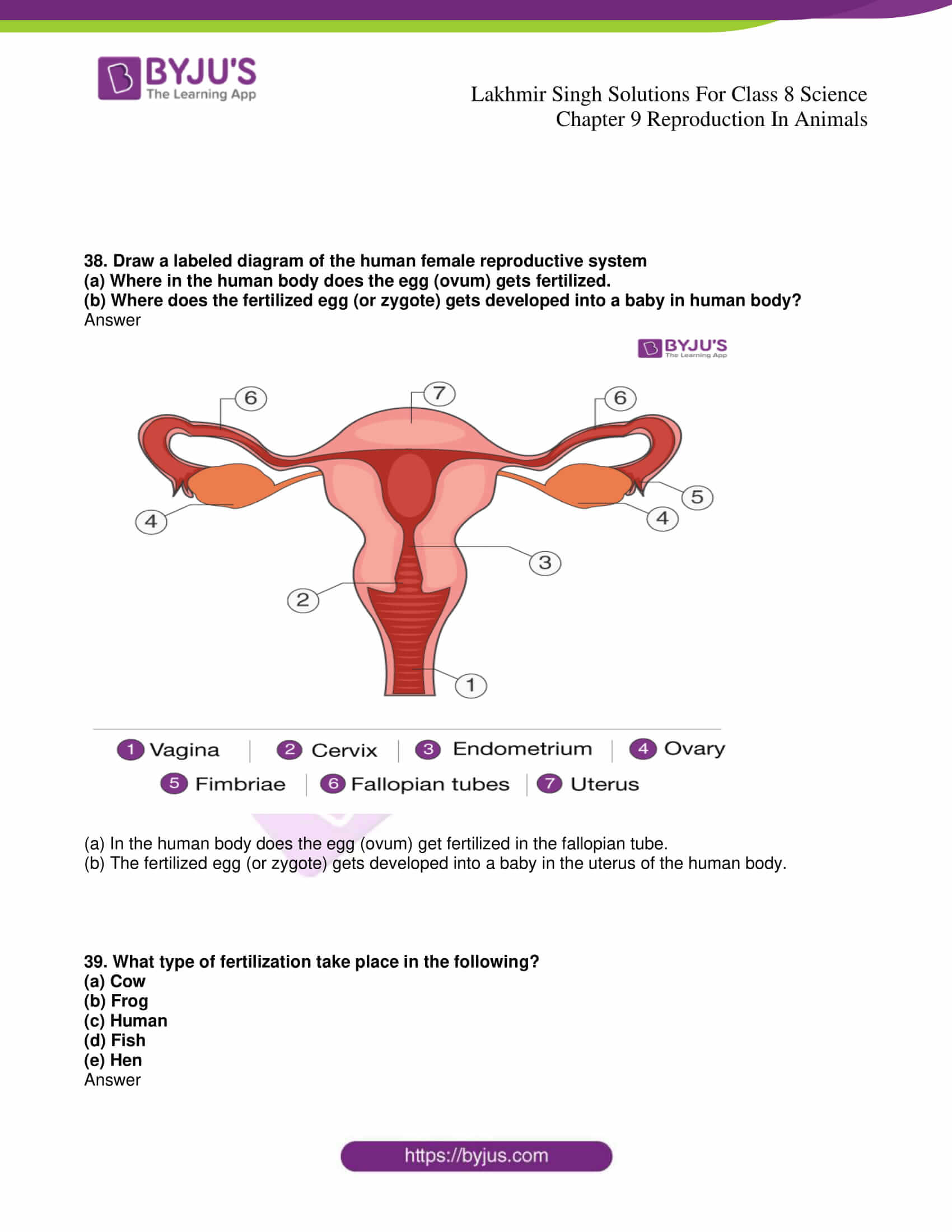 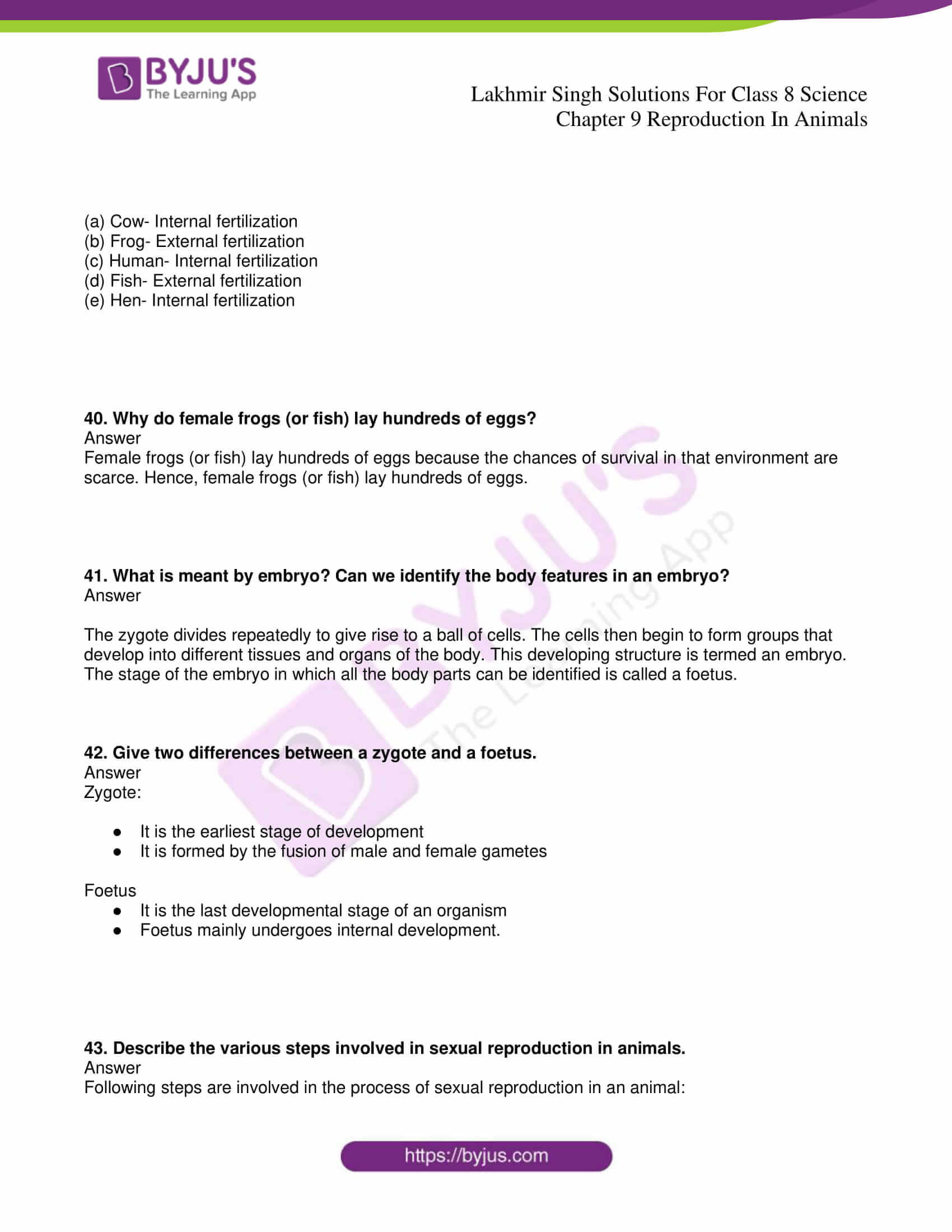 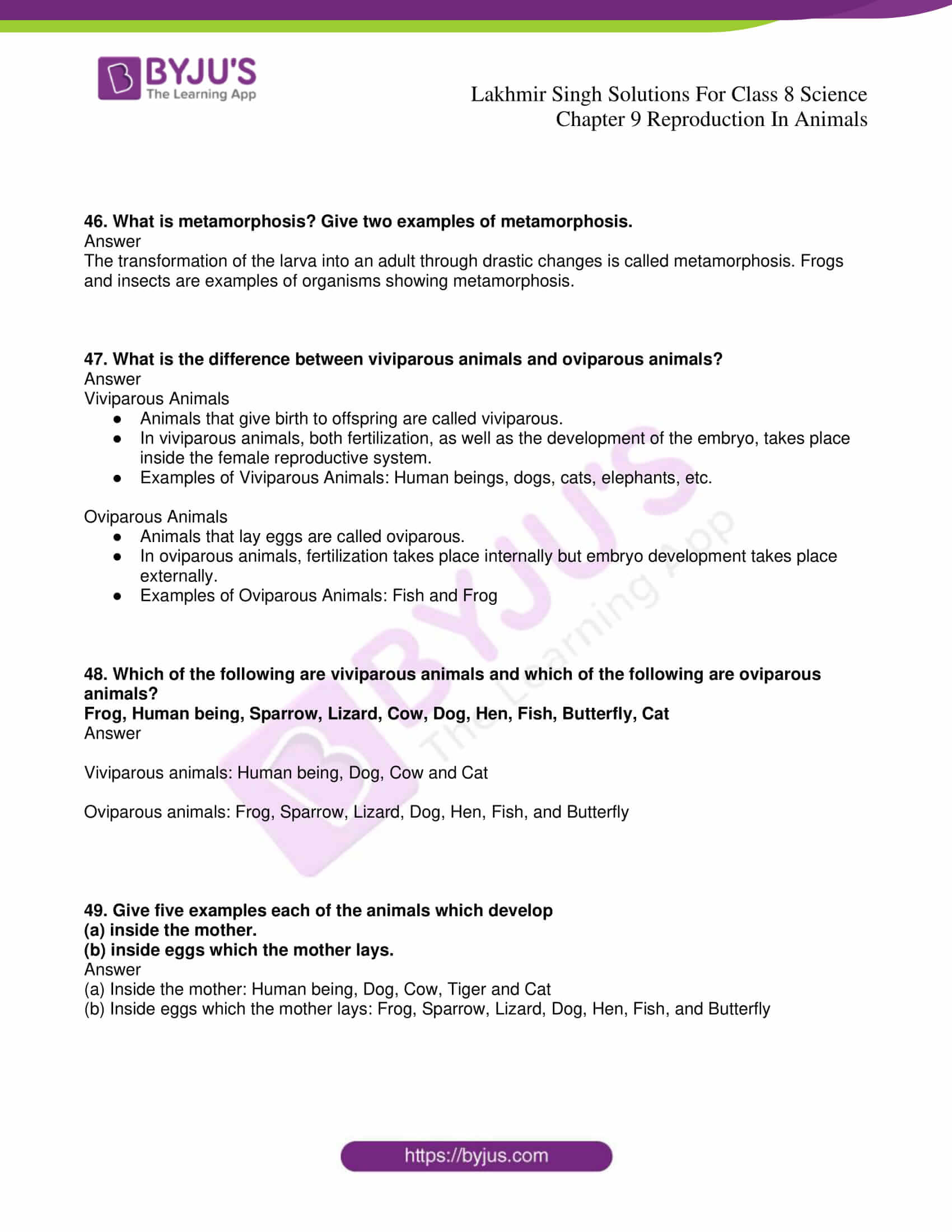 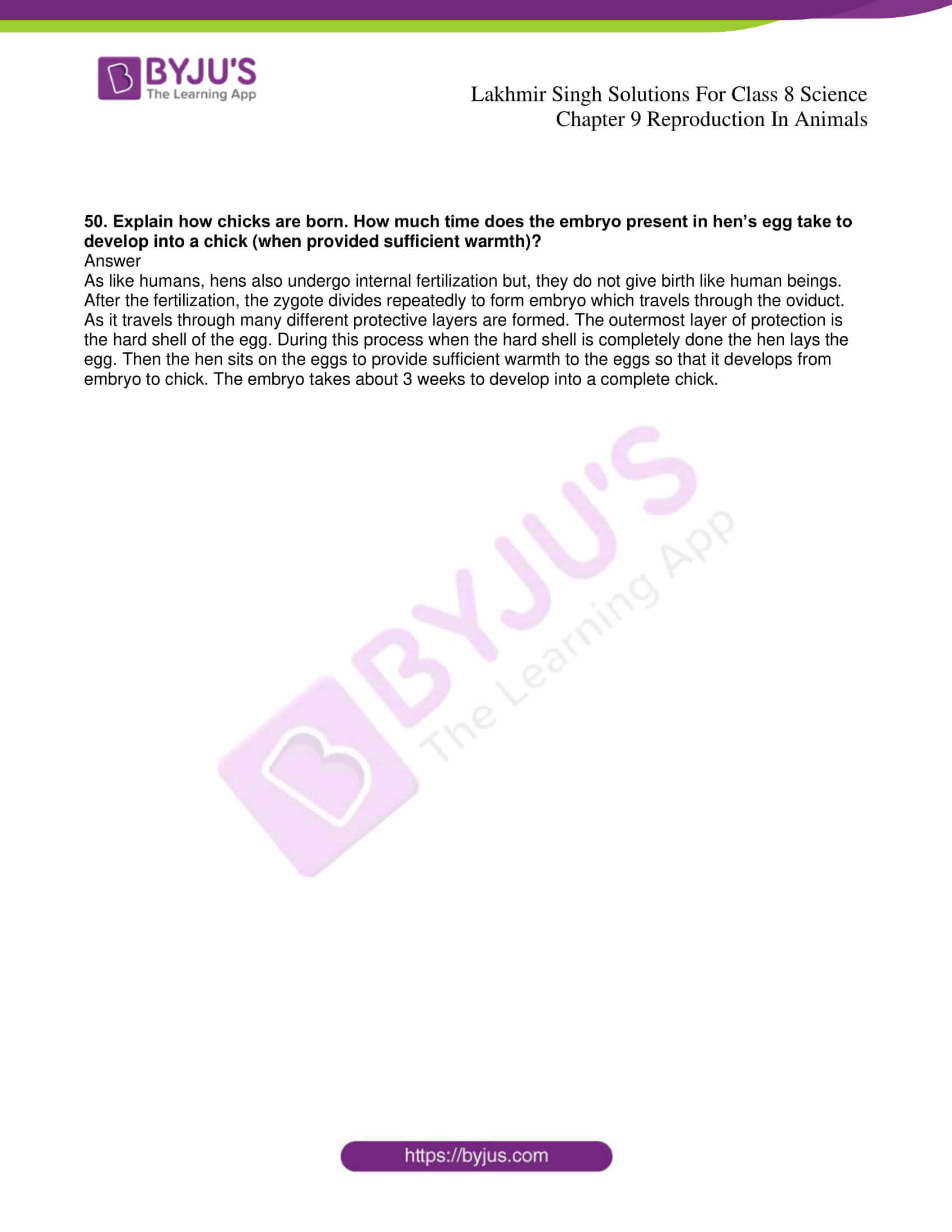 1. Which life process ensures that a plant of animal species will not disappear from the earth?

Reproduction is the life process that ensures that a plant of animal species will not disappear from the earth.

2. What is the name of the reproductive process?

(a) Which involves two parents?

(b) Which involves only one parent?

(a) Animals that reproduce sexually are humans and dogs

(b) Animals that reproduce asexually are hydra and planaria.

5. Which type of reproduction?

(b) Does not involve gametes?

(b) Asexual reproduction does not involve gametes.

6. Give another term for a fertilized egg.

Zygote is another term for the fertilized egg.

7. Name the process of the fusion of gametes?

The process by which male and female gametes fuse together is called fertilization.

8. Do all animals give birth to individuals like humans?

No, all animals do not give birth like humans.

9. What is the other name of sex cell?

10. What are the organs in humans which produce the gametes?

Testes in males and ovaries in females are the organs in humans that produce the gametes.

11. (a) What are the male gametes in humans called?

(a) The male gametes in humans are called sperms

(b) Testes is the organ which produces male gametes.

12. (a) What are the female gametes in humans called?

(b) Name the organs which produce female gametes.

(a) The female gametes in human cells are called eggs.

13. Name the organs which produce sperms in humans.

Testes are the organs which produce sperms in humans.

14. Name the organs which produce egg (or ova) in humans.

15. What do the testes in a man produce?

The testes in a man produces sperms.

16. What do the ovaries in a woman produce?

The ovaries in a woman produces eggs.

17. Which organ of the human body passes sperms from a man to a woman?

The penis is the organ that passes sperms from man into the vagina of a woman’s body.

18. In which female reproductive organ does the embryo get embedded?

The embryo gets embedded in the wall of the uterus for further development.

19. Which stage comes earlier in the development of a human baby from zygote: fetus or embryo?

Embryo stage comes earlier in the development of a human body.

20. Name the technique which is used to help a woman with blocked oviducts to have a baby.

In Vitro Fertilization is the technique that is used to help a woman with blocked oviducts to have a baby.

IVF stands for In Vitro Fertilization.

22. What is the success rate of IVF technique of reproduction in humans?

The success rate of IVF is only about 30 to 40 percentage.

23. What type of fertilization takes place in a hen?

24. What term is used for the following? The change from tadpole to frog.

The transformation from tadpole to frog is termed as metamorphosis.

25. Name two animals that produce embryos that grow into larvae before transforming into adults.

Frog and silk moth produce embryos that grow into larvae before transforming into adults.

26. What term is used for ‘bulges’ observed on the sides of the body of Hydra?

Bulges observed on the sides of the body of Hydra are termed as buds and they develop into a new individual.

27. What type of fission takes place in Amoeba?

28. Name one animal each which reproduces :

(a) by binary fission, and

29. Name the asexual method of reproduction:

30. Name the technique which was used in producing ‘Dolly’ the sheep.

The technique which was used in producing ‘Dolly’ the sheep is cloning.

31. Name the parent sheep of which Dolly was a clone.

Dolly was the healthy clone of Finn Dorsett Sheep.

32. What name is given to the following?

An animal which is an exact copy of its parents.

An animal which is an exact copy of its parents is called a clone.

33. What are the two general methods of reproduction in organisms?

The two general methods of reproduction in organisms are sexual and asexual reproduction.

State whether the following statements are True or False:

(a) Each sperm is a single cell.

(b) A new human individual develops from a cell called gametes.

(c) Egg laid after fertilization is made up of a single cell.

(d) A zygote is formed as a result of fertilization.

(f) An embryo is made up of a single cell.

(g) Oviparous animals give birth to young ones.

(k) Binary fission is a method of asexual reproduction.

(l) Fertilization is necessary even in asexual reproduction.

(m) Cloning is a sexual reproduction method in mammals.

Fill in the following blanks with suitable words

(a) The process of reproduction ensures continuity of life on earth.

(b) The cells involved in sexual reproduction are called gametes

(d) The process of fusion of gametes is called fertilization

(e) The other name of an egg cell is ovum

(f) A sperm is much smaller than an egg cell.

(g) In humans, one nature egg (or ovum) is released into oviduct every mouth by one of the ovaries.

(i) The cow is a vivaparous animal whereas ostrich is anoviparous_ animal.

(k) The larva of the frog is called tadpole

(m) Dolly, the sheep, was produced by the technique called cloning.

36. (a) What is the difference between asexual and sexual reproduction?

It produces a large number of offspring due to external hazards.

38. Draw a labeled diagram of the human female reproductive system

(a) Where in the human body does the egg (ovum) gets fertilized.

(b) Where does the fertilized egg (or zygote) gets developed into a baby in human body? 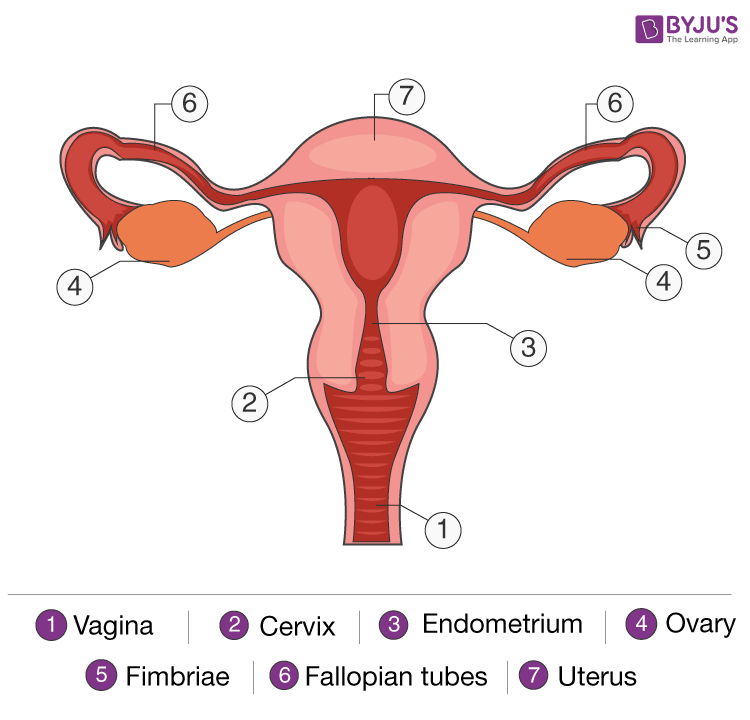 (a) In the human body does the egg (ovum) get fertilized in the fallopian tube.

(b) The fertilized egg (or zygote) gets developed into a baby in the uterus of the human body.

39. What type of fertilization take place in the following?

40. Why do female frogs (or fish) lay hundreds of eggs?

41. What is meant by embryo? Can we identify the body features in an embryo?

The zygote divides repeatedly to give rise to a ball of cells. The cells then begin to form groups that develop into different tissues and organs of the body. This developing structure is termed an embryo.

The stage of the embryo in which all the body parts can be identified is called a foetus.

42. Give two differences between a zygote and a foetus.

43. Describe the various steps involved in sexual reproduction in animals.

Following steps are involved in the process of sexual reproduction in an animal:

44. Draw a labeled diagram of the human male reproductive system in animals. 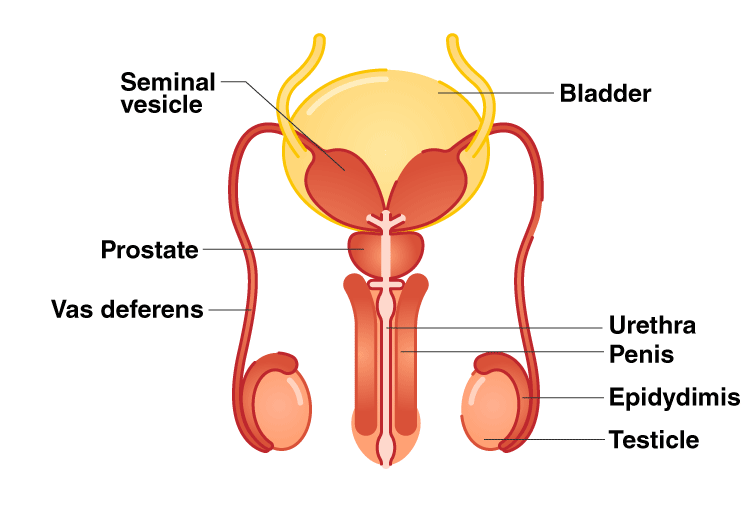 45. Define foetus. After how many weeks of development, a human embryo is said to become a foetus.

The stage of embryo in which all body parts can be identified is called a foetus. A human embryo is said to become a foetus after 8 weeks of the development of the baby.

The transformation of the larva into an adult through drastic changes is called metamorphosis. Frogs and insects are examples of organisms showing metamorphosis.

49. Give five examples each of the animals which develop

(a) inside the mother.

(b) inside eggs which the mother lays.

(a) Inside the mother: Human being, Dog, Cow, Tiger and Cat

(b) Inside eggs which the mother lays: Frog, Sparrow, Lizard, Dog, Hen, Fish, and Butterfly

50. Explain how chicks are born. How much time does the embryo present in hen’s egg take to develop into a chick (when provided sufficient warmth)?

As like humans, hens also undergo internal fertilization but, they do not give birth like human beings. After the fertilization, the zygote divides repeatedly to form embryo which travels through the oviduct. As it travels through many different protective layers are formed. The outermost layer of protection is the hard shell of the egg. During this process when the hard shell is completely done the hen lays the egg. Then the hen sits on the eggs to provide sufficient warmth to the eggs so that it develops from embryo to chick. The embryo takes about 3 weeks to develop into a complete chick.