The resources which cannot be regained from nature are called natural resources. The basic natural resources given by mother nature are explained in this chapter. The resources are very important and its judicious use and the ways for its minimal use are described in this chapter. The chapter also briefs on the hazards that the environment is facing. The different kinds of pollution, global warming, deforestation, and ozone layer depletion. 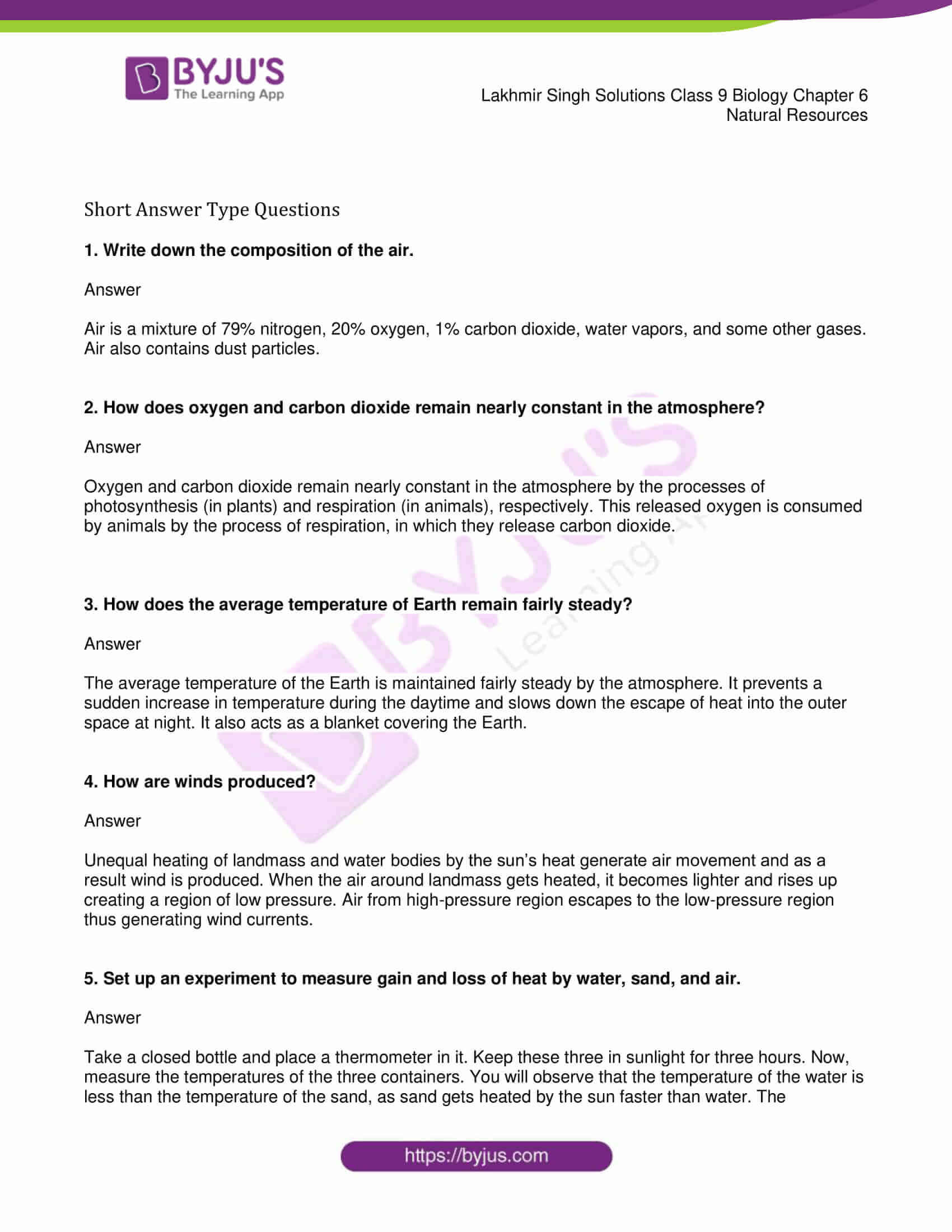 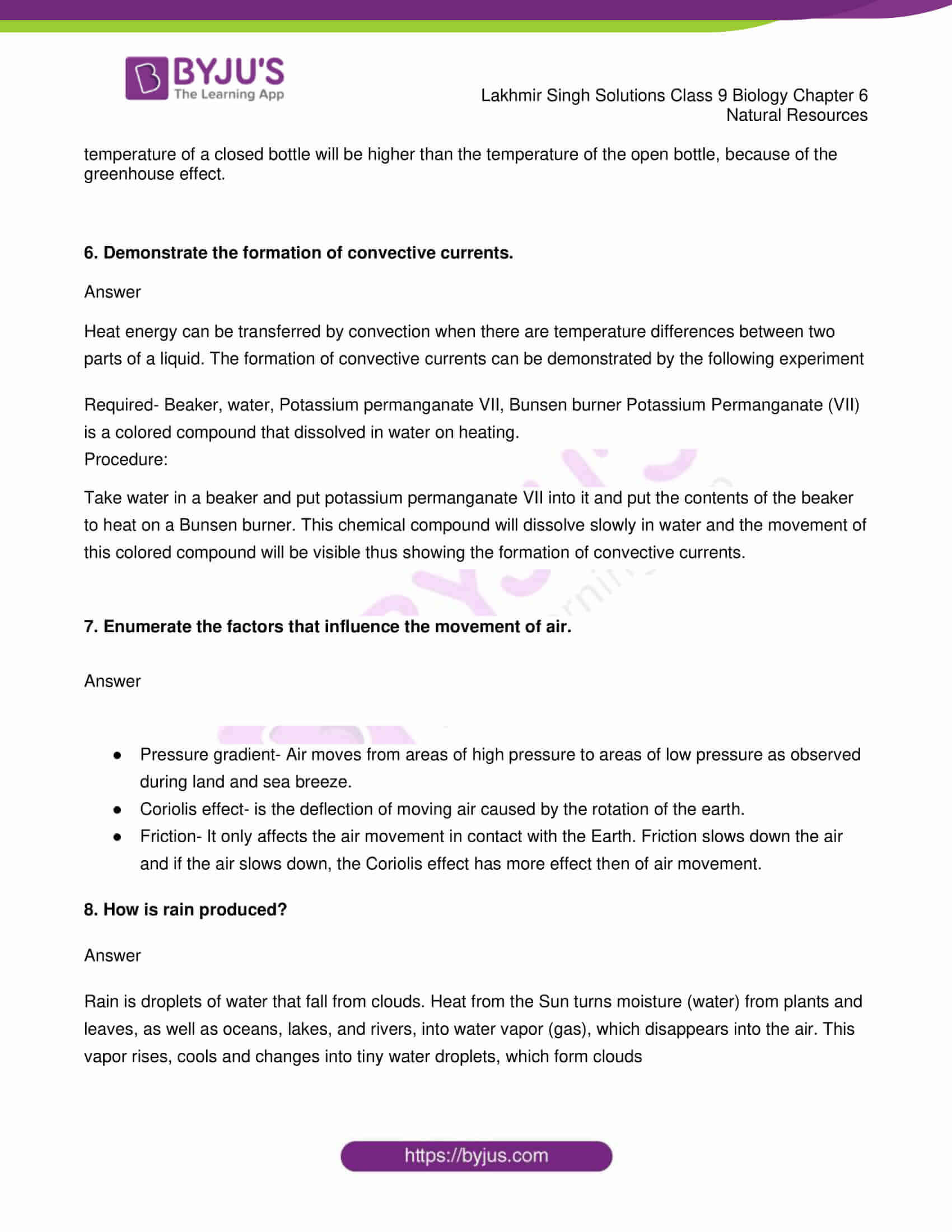 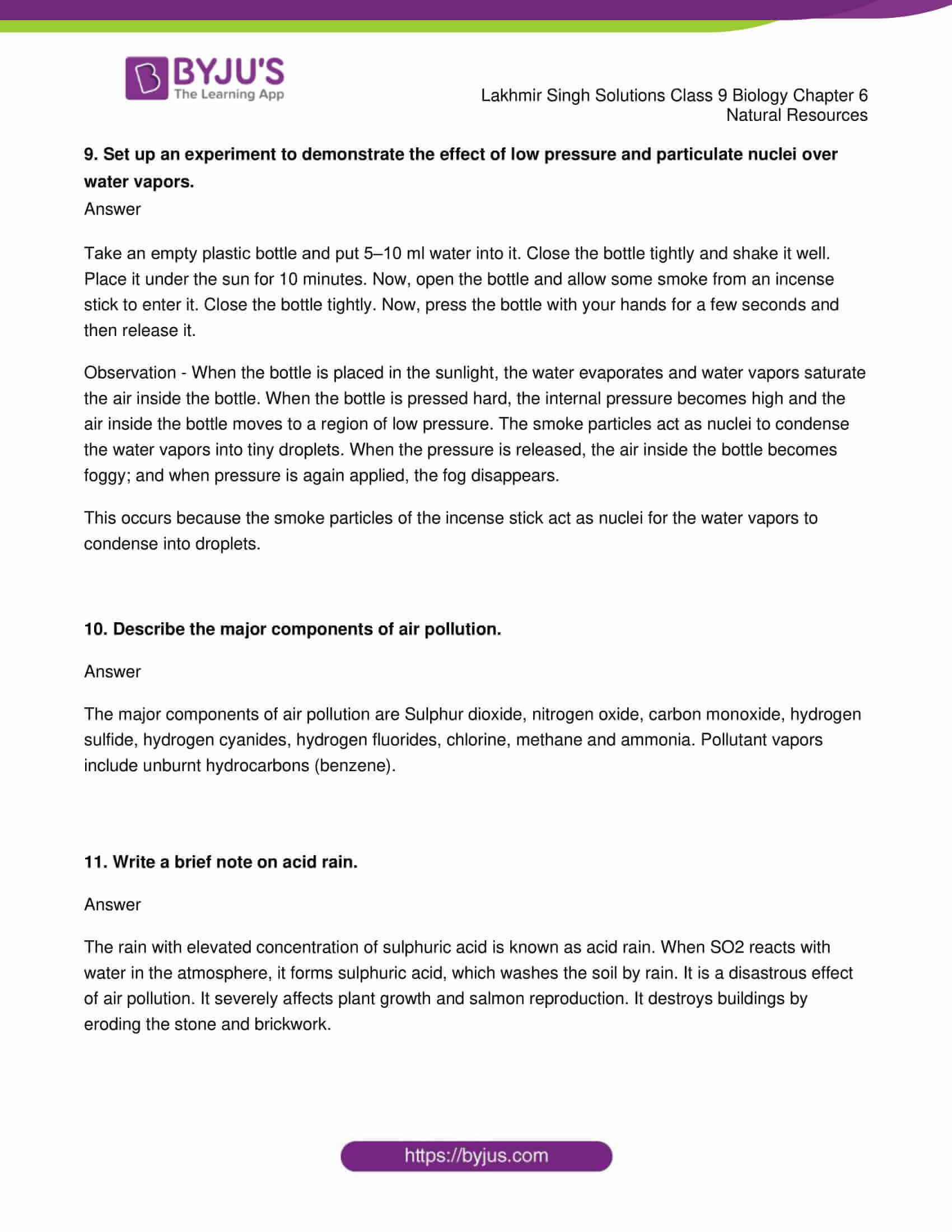 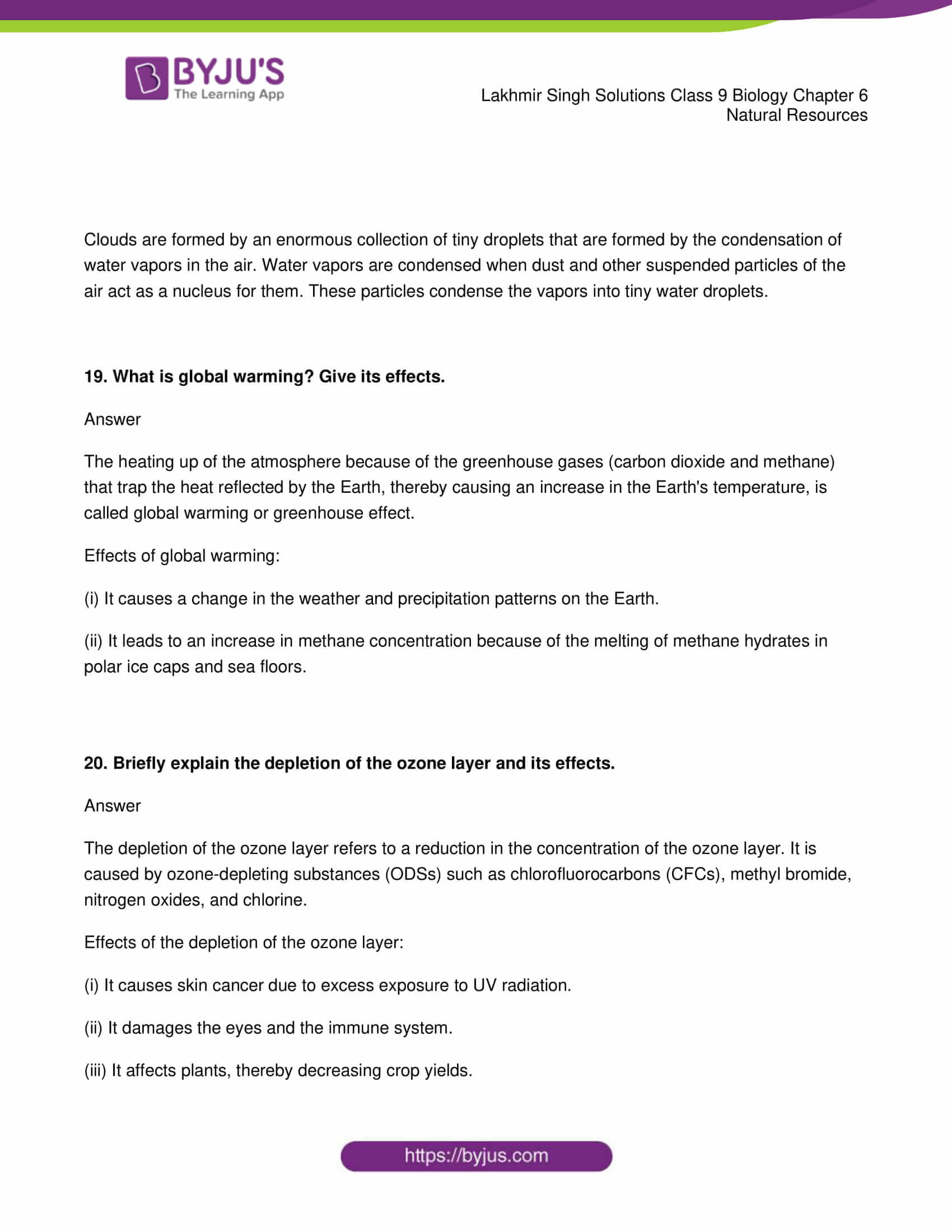 1. Write down the composition of the air.

Air is a mixture of 79% nitrogen, 20% oxygen, 1% carbon dioxide, water vapors, and some other gases. Air also contains dust particles.

2. How does oxygen and carbon dioxide remain nearly constant in the atmosphere?

3. How does the average temperature of Earth remain fairly steady?

The average temperature of the Earth is maintained fairly steady by the atmosphere. It prevents a sudden increase in temperature during the daytime and slows down the escape of heat into the outer space at night. It also acts as a blanket covering the Earth.

4. How are winds produced?

Unequal heating of landmass and water bodies by the sun’s heat generate air movement and as a result wind is produced. When the air around landmass gets heated, it becomes lighter and rises up creating a region of low pressure. Air from high-pressure region escapes to the low-pressure region thus generating wind currents.

5. Set up an experiment to measure gain and loss of heat by water, sand, and air.

6. Demonstrate the formation of convective currents.

Heat energy can be transferred by convection when there are temperature differences between two parts of a liquid. The formation of convective currents can be demonstrated by the following experiment

Take water in a beaker and put potassium permanganate VII into it and put the contents of the beaker to heat on a Bunsen burner. This chemical compound will dissolve slowly in water and the movement of this colored compound will be visible thus showing the formation of convective currents.

7. Enumerate the factors that influence the movement of air.

8. How is rain produced?

Rain is droplets of water that fall from clouds. Heat from the Sun turns moisture (water) from plants and leaves, as well as oceans, lakes, and rivers, into water vapor (gas), which disappears into the air. This vapor rises, cools and changes into tiny water droplets, which form clouds

9. Set up an experiment to demonstrate the effect of low pressure and particulate nuclei over water vapors.

This occurs because the smoke particles of the incense stick act as nuclei for the water vapors to condense into droplets.

The rain with elevated concentration of sulphuric acid is known as acid rain. When SO2 reacts with water in the atmosphere, it forms sulphuric acid, which washes the soil by rain. It is a disastrous effect of air pollution. It severely affects plant growth and salmon reproduction. It destroys buildings by eroding the stone and brickwork.

12. Explain what is smog. Give its effects.

Smog is a photochemical haze or smoky mist caused by the action of solar UV radiation on the atmosphere, which is polluted by primary pollutants. Secondary pollutants such as formaldehyde, aldehydes, and peroxyacetyl nitrate (PAN) collectively form smog.

(i) It reduces visibility.

(ii) It is highly suffocating and toxic.

13. What are the effects of air pollution on human beings?

Following are the effects of air pollution on human beings:

(ii) Air pollutants cause irritation in the eyes, throat, and lungs.

14. Explain the direction of air movement during the day and night in coastal areas.

15. Give the role of atmosphere in climatic control.

The Earth’s atmosphere acts as a blanket for the Earth. It keeps the average temperature of the Earth steady, prevents the sudden increase in temperature during daylight hours, and slows down the escape of heat into the outer space at night.

16. Briefly explain the main layers of the atmosphere.

Following are the five main layers of the atmosphere:

(i) Troposphere: It is the lowest layer that contains air and that extends up to 8‒20 km from the Earth.

(ii) Stratosphere: It is the second layer of atmosphere that extends up to 50 km from the Earth.

(iii) Mesosphere: It is the third layer of the atmosphere that lies above the stratosphere.

(iv) Thermosphere: It is the fourth layer of atmosphere that extends up to 100‒120 km from the Earth.

(v) Exosphere: It is the outermost layer of the atmosphere.

Clouds are formed by an enormous collection of tiny droplets that are formed by the condensation of water vapors in the air. Water vapors are condensed when dust and other suspended particles of the air act as a nucleus for them. These particles condense the vapors into tiny water droplets.

19. What is global warming? Give its effects.

The heating up of the atmosphere because of the greenhouse gases (carbon dioxide and methane) that trap the heat reflected by the Earth, thereby causing an increase in the Earth’s temperature, is called global warming or greenhouse effect.

(i) It causes a change in the weather and precipitation patterns on the Earth.

(ii) It leads to an increase in methane concentration because of the melting of methane hydrates in polar ice caps and sea floors.

20. Briefly explain the depletion of the ozone layer and its effects.

Effects of the depletion of the ozone layer:

(i) It causes skin cancer due to excess exposure to UV radiation.

(ii) It damages the eyes and the immune system.