The chlorophyll absorbs light energy of red and blue wavelengths. Whereas, the green light is not absorbed and is reflected back. Thus, the leaves appear green.

This pigment is found in all higher plants. It is the most vital pigment used in photosynthesis. Some algae, cyanobacteria and anaerobic phototrophs also show the presence of chlorophyll a. It has a strong rate of absorption. It absorbs violet-blue as well as orange-red light and reflects blue-green light.

This pigment is primarily seen in marine algae. Brown algae, Diatoms and Dinoflagellates show the presence of chlorophyll c. It is an unusual chlorophyll pigment that has a porphyrin ring. This can be further classified into chlorophyll c1, c2 and c3. The chemical composition and the absorption rate differs in each sub-type.

Chlorophyll d is present only in red algae and cyanobacteria. These organisms live in deep water, and thus use red light for photosynthesis.

This is a rare pigment that is found in some golden algae. Chlorophyll e has been identified from the Xanthophytes (yellow-green algae).

This pigment was recently found, and is known to absorb infrared light. It can absorb light of a wavelength that is over the visible range. Their function is yet to be studied.

What are the other biological pigments that help in photosynthesis?

The photosynthesis process is mainly based on chlorophyll pigment. Also, there are other red and yellow pigments that help in this biological process. This includes carotenoids (yellow-orange), xanthophylls (yellow), and betalain (red) pigments.
Extended Reading:Biological Pigments in Plants 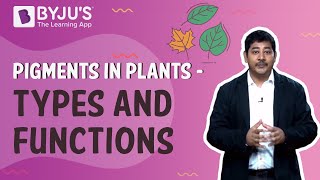