Mentioned below are the important questions on sexual reproduction in flowering plants for Class 12. The answers are also provided for reference.

Q.2. Which part of gynoecium determines the compatible nature of pollen grain?
A.2. Stigma

Q.3. What is common in the function performed by nucellus and cotyledon?
A.3. The cotyledons and nucellus both store reserve food material and does the work of providing nourishment- nucellus (embryo sac), cotyledons (embryo).

Q.6. Show the direction of the pollen tube from the pollen on the stigma in the embryo sac in the given diagram. 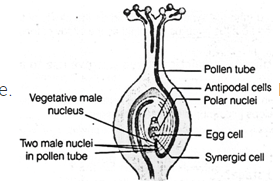 Q.13. Does apomixis require fertilization and pollination? Give reasons in support of your answer.
A.13. No, apomixis does not require pollination and fertilization. This is because apomixis is a form of asexual reproduction in which the female reproductive apparatus is used. The embryos can develop directly from the nucellus or synergids.

Q.14. Mention the kind of carpel in the diagram given below. 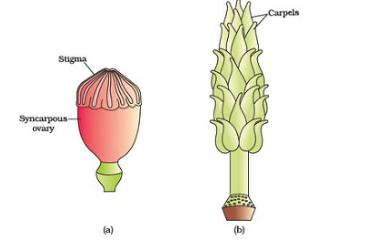 Q.16. Each pollen grain in the flowering plants produces male gametes. State the function of the male gametes.
A.16. One male gamete fuses with the nucleus of the egg cell, while the other male gamete moves towards the two polar nuclei present in the central cell and fuses with it to form a triploid primary endosperm nucleus.

A.18.Pollination is a process of transferring pollen grains from the male anther of a flower to the flower’s female part called the stigma. Pollination is the sexual mode of reproducing, which is carried out by all flowering plants of a plant kingdom.

Q.19.What are the stages of post-fertilization in plants?

A.19.In all flowering plants, the post-fertilization is a critical stage which occurs after the double fertilization and includes the series of steps:

Q.20.What are the male and female reproductive parts of a flower?

A.20.A flower plays a vital role in the reproduction process of a plant. Therefore, it is called the reproductive organ of plants.

The male reproductive parts of the flower include the stamen the filament and the anther, which are collectively termed the androecium.

The female reproductive parts of the flower include carpels, pistils, stigma, style and an ovary, which are collectively termed the gynoecium.

A.21.Cross-Pollination is the complex type of pollination during which the pollen grains are transferred from the anther of one flower into the stigma of another flower. This type of pollination makes use of both biotic and abiotic agents like wind, water, insects, birds, animals, and other agents as pollinators.

A.22.In plants, double fertilization refers to the fusion of one female gametophyte with two male gametophytes. It is a complex process in all flowering plants.

Q.23.What are the main layers of a flower?

A.23. There are different types of flowers in a plant kingdom. A few among them vary in colour, structure, shape, etc. However, all flowers have unique layers. The four main layers of a flower:

A.24.Morphogenesis is defined as a biological process which controls the growth, development in size, shape and structure and distribution of cells during the embryonic development of an organism.

Q.25. State the role of endothecium.

A.25. The endothecium protects the microsporangium and helps in the dehiscence of anther for the release of pollen grains.

Q.2. Arrange them sequentially according to how they appear in the artificial hybridization programme.

A.2. a) Selection of parents b) Emasculation c) Bagging d) Collection of pollen e) Dusting of pollen on the stigma f) Rebagging

Q.3. How do self-incompatibility restrict autogamy? How does pollination occur in such plants?
A.3. Self-incompatibility restricts autogamy by a mechanism known as self-sterility. This is a genetic mechanism in which the germination of pollen grains or the pollen tube growth in the pistil is inhibited which prevents the pollen from fertilizing the ovules. Such plants pollinate by the process of cross-pollination. 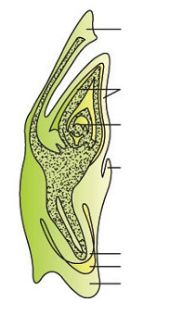 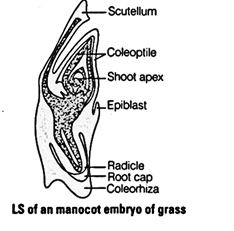 Q.5. Explain the term polyembryony. How is it exploited commercially?
A.5. When more than one embryo occurs in a seed, it is referred to as polyembryony. This can be seen in a few citrus fruits and mango varieties. Polyembryony plays a significant part in plant breeding and horticulture. These embryos give rise to virus-free plantlets and are healthy. Hybrid varieties of such plants and vegetables are being grown extensively. These varieties thus obtained are highly productive.

Q.6. Is there any difference between apomixis and parthenocarpy? Explain the benefits of each.
A.6. Yes, parthenocarpy is different from apomixis. In parthenocarpy, the fruit is produced without the fertilization of the female gamete. It is used for the production of fruits without seeds such as banana and grapes for commercial purposes. Apomixis is the process in which the seeds are produced without fertilization but the process occurs in the female reproductive tract of the plant. In this, the megaspore mother cell does not undergo meiosis. It is used for the commercial production of hybrid varieties and in the production of virus-free varieties. 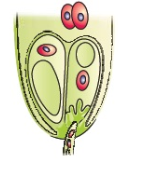 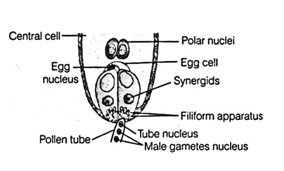 Q.10.Explain the events which occur after the process of fertilization in plants.

A.10.Fertilization is a vital process, which takes place in all sexually reproducing organisms. In all flowering plants, fertilization occurs after pollination and germination. After the process of fertilization, the following events occur:

Q.2. Describe the structure of the embryo sac of a mature angiosperm. Explain the role of synergids in it.
A.2.

Role of Synergids
The synergids are responsible for the reproduction in an angiosperm. During fertilization, a pollen tube grows into one of the synergids. The tube ceases growth, ruptures and releases two sperm cells.

Q.3. How is it that the embryo sacs of some apomictic species look normal but contain diploid cells?
A.3. The offsprings produced by apomixis are genetically identical to the parent. In flowering plants apomixis is used to reproduce asexually through seeds. In a few species, the diploid egg cell does not undergo reduction division and forms an embryo without fertilization. In a few citrus species, the nucellar cells surrounding the embryo sac divide and give rise to an embryo. This takes place in the megaspore mother cell. It only undergoes mitosis and hence produces diploid cells in the embryo sac.

Q.4. What are the characteristics of wind, water and insect-pollinated flowers?

A.4. Characteristics of wind-pollinated flowers:

Q.5. Explain the structure of the pollen.

The exospore protects the male genetic material during transportation from an anther to stigma. The waxes and proteins present on the pollen surface repel moisture and interact with the stigma.

Q.6.What are the functions of a flower?

For more information on Sexual Reproduction in Flowering Plants Class 12 or any other topics, please visit BYJU’S Biology or download the BYJU’S app for further reference.