What is oxygen cycle? Explain with diagram.

The oxygen cycle is the biogeochemical cycle of oxygen. It is mainly involved in maintaining the level of oxygen in the atmosphere. Oxygen is the main by-product of photosynthesis. It is involved in the oxidation of carbohydrates with the release of energy, carbon dioxide and water. The cycling of oxygen is a highly complex process. Oxygen occurs in a number of chemical forms and combinations. It combines with nitrogen to form nitrates and with many other minerals and elements to form various oxides such as iron oxide, aluminium oxide and others. Much of oxygen is produced from the decomposition of water molecules by sunlight during photosynthesis and is released in the atmosphere through the transpiration and respiration processes of plants. 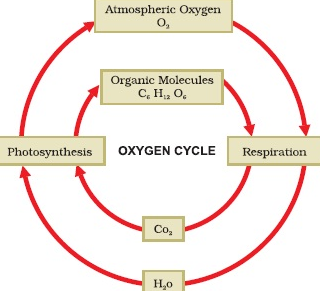