The chromate formula is one of the common formulas that is seen often in chemistry. The formula represents the chromate ion which is one of several polyatomic ions used often in the formation of insoluble salts.

As per the definition, chromate is a chromium oxoanion and a divalent inorganic anion which is formed by the removal of two protons in chromic acid. It acts as a strong oxidising agent and is usually a conjugate base of a hydrogenchromate.

The formula of chromate is CrO42-. The chromate ion usually consists of one chromium atom (+6 oxidation state) and four oxide atoms. The overall charge is -2.

The structural formula of chromate is normally given as; 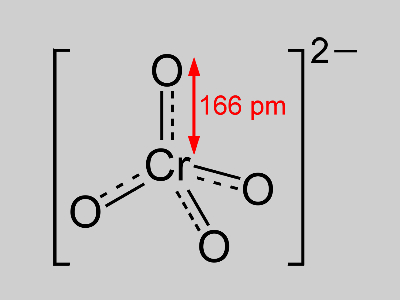 Connect with BYJU’S to know more about other chemical compound formulas as well as different chemistry concepts.