The Princess and The Pea - Fascinating Fairy Tale for Kids

Who doesn’t love reading stories, especially fairy tales? Everyone does! Whether you have ever heard of other fairy tales or not, you must have definitely heard of – The Princess and The Pea story. The Princess and The Pea story for kids instils the fact that we should not judge people on the basis of their appearances as it could be misleading. We should not jump to conclusions without analysing the truth and shouldn’t be quick to judge others based on their looks.

The Princess and The Pea 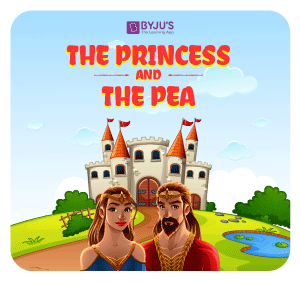 Once upon a time, there lived a handsome Prince in a magnificent kingdom. He used to live in a huge castle and often wondered when he would get married to a real Princess. He travelled almost all parts of the world, but nowhere could he find a true Princess.

During lunch when his parents, the King and the Queen enquired if he could find a true princess for himself. The Prince replied, “It is impossible to find a real Princess in the midst of all the maidens that I’ve met”. Hearing this, the King patted his son’s back and said, Don’t worry, son! Be patient, soon you shall find what you desire”. Saying so, the King went to his chamber and so did the Prince.

That evening, it started raining cats and dogs followed by a thunderstorm. Thunder clapped and lightning flashed on the gloomy sky filled with dark clouds. As the rain clattered down on the roofs of the castle, it seemed as though hundreds of horses were charging towards the battlefield.

Just then, there was a loud knock at the huge door of the castle. The King wore his royal robe and headed towards the castle door. As he opened the door, there stood a shabbily dressed young lady right in front of him who was shivering out of cold as she was completely drenched in the rain.

‘I am a real Princess. Could you lend me a few dry clothes and offer me a bed to sleep tonight?’, said the young lady. The King felt sad looking at her state and let her into the castle.

The Queen enquired about the young lady and the King said, ‘She says, she is a real Princess and asked for some dry clothes and wants to stay here overnight’. Hearing this Queen murmured to herself, ‘We shall soon find out if she’s a true Princess or not’.

In no time, the Queen handed a nightgown to the young lady and told her, ‘Go and change your wet dress, while I prepare your chamber’. Saying so, she asked the servants to prepare the bed with heavy covers, bedsheets, thick mattresses and quilts.

Before laying down the twenty mattresses on the bed, the Queen placed a single garden green pea on the bed frame. She then asked the servants to pile the mattresses on top of the pea, separating each layer with a soft and warm quilt. Once they were done, they informed the Queen, who in turn told her new guest, ‘Your chamber is ready, young lady!’

When the young lady went to her chamber, she was surprised to see the bed that was high off the ground. Nonetheless, the Princess climbed the bed with the help of a ladder, tucked on the covers and blew out the lamp of the room. All night, she tossed on the bed from one side to the other.

The next morning at the breakfast table, the Queen turned to the young lady and asked, ‘Dear Princess, did you have a good night’s sleep?’ The young lady replied, ‘Oh, not so well! Although I’m grateful to you for allowing me to put up for the night, there seemed to be something very hard underneath my mattress. It was so uncomfortable that I couldn’t sleep a wink last night!’

Oh, my goodness! Is that so?’ replied the Queen. Saying so, she turned to the Prince and pointed towards the young lady and said, ‘I think we have found a real Princess for you. No one other than a true Princess could have been sensitive enough to feel a single garden pea through my thick mattresses and best quilts. You must marry her soon!’

The Prince was ecstatic and filled with happiness. He turned to the Princess and asked, ‘Dear Princess, will you marry me and offer me the honour of calling you my wife?’ The Princess blushed and said she would marry him only if her one condition was fulfilled.

The Prince was quick to reply, ‘Anything you say!’ The Princess requested him to promise that from that day onwards, a garden pea should be used in the castle only for eating purposes and not for sleeping upon’. Hearing this, he looked back at the Princess, chortled and said, ‘I promise, my dear Princess”. The Princess jumped out of her seat and accepted the marriage proposal right away. Soon, they got married and lived happily ever after.

Loved The Princess and The Pea story for kids in English? The fairy tale shows that we should never judge people simply on the basis of their looks. Judging people by their appearance does not define who they are, rather it defines who you are! Want to access more such enchanting tales? We have a plethora of the most interesting fairy tales of all time.

Reading stories helps in building good vocabulary and enhances the linguistic skills in kids. Additionally, it also takes young minds to an imaginary world of dreams and imparts moral lessons through its fantastic elements. Besides, you can explore other kinds of stories such as bedtime stories, Panchatantra stories, moral stories, etc.

At BYJU’S, we provide interesting GK Questions, easy trivia questions, engaging worksheets of different subjects, CBSE poems and essays for primary classes, NCERT Solutions and a lot of awesome materials for kids in our Kids Learning section. Don’t forget to visit BYJU’S website and explore a huge collection of resources that will be helpful for your little one!