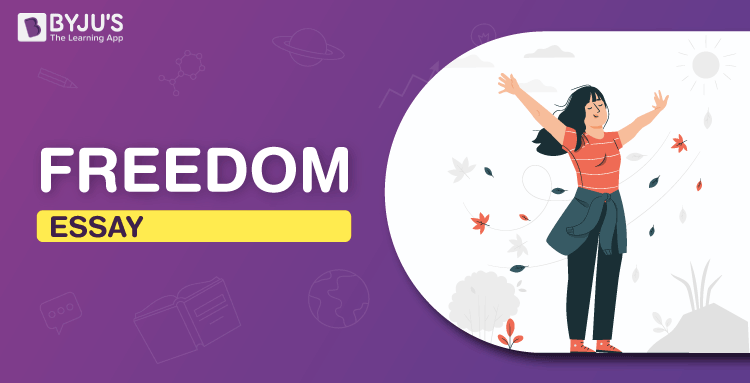 The freedom essay portrays the meaning of freedom, the Indian freedom struggle and its importance. Freedom is one of the essential values in our society. It sets us apart from other countries, and it has been our main goal since we were born. For some, freedom means different things. It is the opportunity to voice your opinion without fear of persecution. For others, it can be obtaining a higher level of education and knowledge than what is available to the general public. There are many different definitions of freedom, and no two people will have the same interpretation or experience of this word. However, one common idea that unites them is that freedom means having unrestricted rights and privileges.

Freedom is something that humans desire to have. It is a fundamental right that many take for granted. We want to do what we please without any restrictions because it gives us a sense of power. It makes us feel like we are in control. However, freedom can be very challenging, painful, and even life-threatening. When people are forced to face their challenges due to a lack of choices, they often develop coping mechanisms. An essay on freedom helps the little ones understand the value of freedom and write a better essay.

The Indian freedom movement was a mass movement that led to the end of British rule in India and the establishment of an independent nation. The campaign was started by Indian nationalists and members of the Congress party demanding independence from Britain. This short essay on freedom in English is an excellent way to help kids learn about Indian independence.

India had an active freedom movement that started in the late 19th century. It was led by Indian nationalist leaders who wanted to free India from British rule. These leaders also wanted to create an independent, democratic, and socialist state. The Indian freedom movement was a significant movement in India to gain independence from British rule. It started in the early 1800s and led to the Independence of India in 1947.

Veer Savarkar, Bhagat Singh, Uddham Singh, Tantia Tope, Mahatma Gandhi and others are the most popular Indian leaders. They started a nationwide civil disobedience campaign against the British Empire.

Freedom is a fundamental human right and an essential element of individual liberty. The value of freedom is the intangible worth of making decisions without outside interference. From the perspective of people who enjoy freedom, there may be no good reason why others should not be free from control or domination.

Freedom is one of the most valuable things people can have. It allows them to do what they want and how they want. This is more valuable than many might think. It also has many benefits for those who have it and those around them. Teach kids to write freedom essay by perusing BYJU’S essay on freedom.

Who are some of the renowned freedom fighters of India?

Veer Savarkar, Bhagat Singh, Uddham Singh, Tantia Tope, Mahatma Gandhi and others are some of the most popular Indian freedom fighters.

When did the Indian freedom movement begin?

The Indian freedom movement began in the late 19th century.