In simple sense, hyperbola looks similar to to mirrored parabolas. The two halves are called the branches. When the plane intersect on the halves  of a right circular cone angle of which will be parallel to the axis of the cone, a parabola is formed. 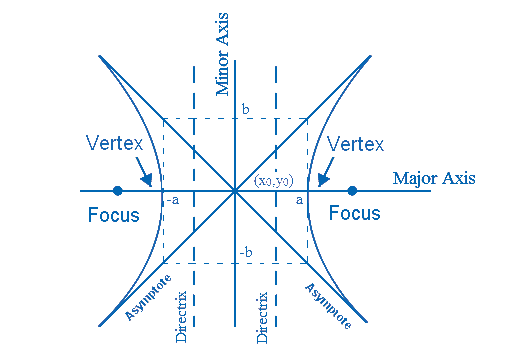 The equation for hyperbola is,

Let us learn the basic terminologies related to hyperbola formula:

The line that passes through the center, focus of the hyperbola and vertices is the Major Axis. Length of the major axis = 2a. The equation is given as:

The line perpendicular to the major axis and passes by the middle of the hyperbola is the Minor Axis.
Length of the minor axis = 2b. The equation is given as:

Two bisecting lines that is passing by the center of the hyperbola that doesn’t touch the curve is known as the Asymptotes. The equation is given as:

Directrix of a hyperbola

Directrix of a hyperbola is a straight line that is used in generating a curve. It can also be defined as the line from which the hyperbola curves away from. This line is perpendicular to the axis of symmetry. The equation of directrix is:

The point of the branch that is stretched and is closest to the center is the vertex. The vertex points are

On a hyperbola, focus (foci being plural) are the fixed points such that the difference between the distances are always found to be constant. The two focal points are: