A radian is defined as the angle of an arc in a circle that is created by enclosing the radius of the circle around its circumference. We represent the angle between two lines through radians and degrees. The total angle of a circle equals 360 or we can call it as 2 radians. With the help of radians to degrees we can convert the angles that are represented in radians into degrees. 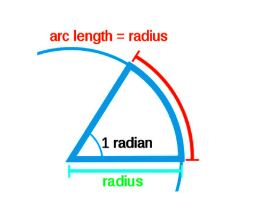 Radians to Degrees Formula is given as,