Nitrite formula is quite an important formula from a perspective that nitrite is a type of an ion that is the source form many chemical compounds. Nitrite ion is known to form bonds with metal in different ways as well as other chemical elements or compounds. When we study inorganic chemistry, nitrite is mostly found to be a salt of nitrous acid while in organic chemistry nitrite is found to be an ester of either nitrous acid or an alcohol.

A nitrite ion is also categorized as a Lewis base. Apart from this, it can also act as an ambidentate ligand in the presence of a metal ion where it will donate a pair of electrons from either oxygen or the nitrogen atom.

The nitrite chemical formula is given as NO2−. Nitrite ion consists of one nitrogen and two oxygen atoms.

The nitrite usually exhibits a symmetrical structure. The ion has a type of resonance hybrid bonds which are of equal length and an angle of 115°. The negative charge of the ion is also equally distributed between the two oxygen atoms. The structural formula can be written as; 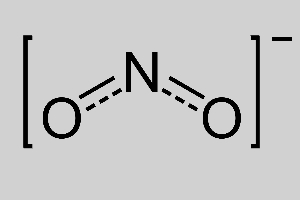 Explore more about other chemical compound formulas as well as different chemistry concepts only at BYJU’S.