The total current in any part of a linear circuit equals the algebraic sum of the currents produced by each source separately. 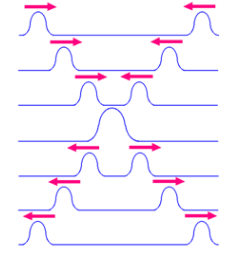 According to the Principle of Superposition

It is noted that the net displacement is the algebraic sum of displacements of individual waves.

Consider two waves are travelling alone and the displacement of these two waves can be represented by y1(x, t) and y2(x, t).

When these two waves overlap, the resultant displacement can be given as y(x,t).

This can be written as

We can conclude that the resultant wave is sinusoidal and travels in x direction.