Tris is an organic compound that is widely used as a buffer solution in biochemistry and molecular biology. Tris is a White crystalline powder and is an amine proton acceptor. It is used in the pharmaceutical industry as well as an emulsifying agent for manufacturing cosmetic creams, lotions, paraffin wax and mineral oil it is also used in the synthesis of surface-active agents. Let’s know the composition and other information on Tris.

It is a primary amino compound – tert-butylamine in which one hydrogen is attached to each methyl group and is replaced by a hydroxy group. The structural representation of Tris is as shown in the figure below. 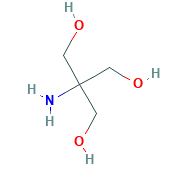