Displacement is calculated as the shortest distance between starting and final point which prefers straight-line path over curved paths.

It gives the shortcut paths for the given original paths.

Problem 1: The path distance from the garden to a school is 5m west and then 4m south. A builder wants to build a short distance path for it. Find

Given: Distance to the west x = 5m 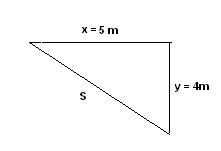 Displacement is given by

The builder can build a path for displacement length of 6.7 m.

Question 2: A girl walks from the corridor to the gate she moves 3m to the north opposite from her house then takes a left turn and walks for 5m. then she takes right turn and moves for 6m and reaches the gate. What is the displacement, magnitude, and distance covered by her?

A magnitude of the displacement can be obtained by visualizing the walking. The actual path from A to B as 3m then from B to D as 5m and finally from D to E as 6m. 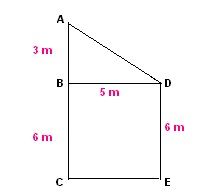 So, the magnitude of resultant displacement is |S| =

The direction of Resultant displacement is South East.