Lead nitrate is colourless to white crystalline solid which is completely soluble in water but slightly soluble in alcohol. In the 19th-century, Lead Nitrate was produced commercially in countries such as the United States and Europe. It was widely used as a raw material in the manufacturing of pigments for lead paints. It has wide applications such as stabilization in polyester and nylon, used in the coatings of photothermographic paper. Lead II Nitrate Formula Structure 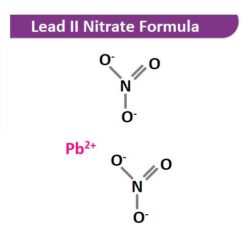 Lead dinitrate is non-combustible but it enhances the burning of combustible materials. It causes an explosion if it is exposed to heat or fire for a long time. On burning this inorganic compound, a toxic oxide of nitrogen is generated.

To learn more about Lead II Nitrate formula from the expert faculties at BYJU’S, register now!