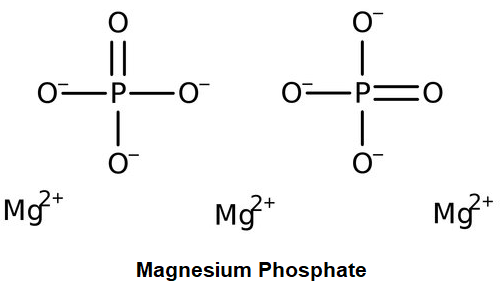 It is the magnesium acid salt of phosphoric acid. It appears as a white crystalline powder and has no smell. Its molecular weight is 218.277 g/mol. It is soluble in water and is used as a food additive.

It has a molecular weight is 120.283 g/mol. Its density is 2.13 g/cm3. It is widely used as a nutritional supplement for athletes and infants.

It is the magnesium acid salt of phosphoric acid, which has varying amounts of water of crystallization. It is naturally found as a mineral of bobierrite. It appears as a white crystalline powder. Its molecular weight is 262.855 g/mol and melting point being 1,184 °C. It does not dissolve in water but is soluble in salt solutions. and is used as a food additive.