Square is a regular quadrilateral. All the four sides and angles of a square are equal. The four angles are 90 degrees each, that is, right angles. A square may also be considered as a special case of rectangle wherein the two adjacent sides are of equal length.

In this section, we will learn about the square formulas – a list of the formula related to squares which will help you compute its area, perimeter, and length of its diagonals. They are enlisted below:

Perimeter of a Square =4a

Where ‘a’ is the length of a side of the square.

Properties of a Square

Consider a square with the lengths of its side and diagonal are a and d units respectively. 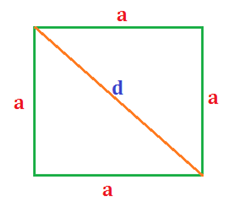 Formula for area of a square: Area of a square can be defined as the region which is enclosed within its boundary. As we mentioned, a square is nothing a rectangle with its two adjacent sides being equal in length. Hence, we express area as:

The area of a rectangle = Length × Breadth

Perimeter of square = 4a

Hence, we can conveniently apply the Pythagorean theorem on these triangles with base and perpendicular being ‘a’ units and hypotenuse being’ units. So we have:

Question 1: A square has one of its sides measuring 23 cm. Calculate its area, perimeter, and length of its diagonal.

Area of the square:

Perimeter of the square:

Diagonal of a square: