The sulphurous or sulfurous acid formula should not be confused with the formula of sulphuric acid. While the formula may look similar but one of the main differences is that there is less number of oxygen atoms in sulfurous acid. Their physical and chemical properties also differ to some extent. Sulphurous acid is typically a dibasic or weak acid and is an aqueous solution of water and sulfur dioxide. It is colourless and has a pungent odour.

The formula of the sulphurous acid is given as H2SO3 where the molecule consists of two atoms of hydrogen, three atoms of oxygen and one atom of sulfur. 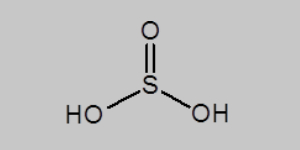