Oxygen formula is one of the most well-known or popular formulas in the realm of chemistry. Oxygen is the most abundant available element in the earth. It is denoted by the symbol O and is categorized under the chalcogen group in the periodic table. Some of the key properties of oxygen are that it is a colourless, tasteless and odourless gas, it easily dissolves in water, reacts with other elements and compounds to form oxides. It is also the most important gas for human beings as it helps in respiration.

The chemical formula of oxygen also known as dioxygen is O2. This formula is given so because oxygen usually combines with another oxygen by forming a covalent bond. It is also diatomic therefore it needs 2 electrons to complete its octet which it easily gets from another oxygen. Meanwhile, oxygen is electronegative meaning it is very reactive. The reaction occurs fast between the two oxygen atoms to gain stability.

A representation of oxygen structural formula is given below. 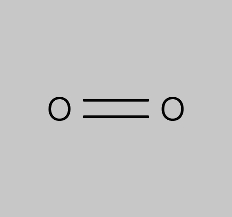