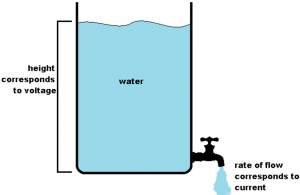 Consider a tall container fitted with a tap at the bottom. When you fill the container with water and turn on the tap, look at the flow of water. The amount of water flowing through the tap depends on many factors. These factors are as follows:

What consist of Electrical Current?

The SI unit of electric current is Ampere (A), 1 ampere is the amount of current when there is a flow of 1 coulomb of charge passing through a cross-section in 1 second.

Metals consisting of electric wires and other electronic equipment like copper, gold, and aluminium have many free electrons which are responsible for the majority of the current flow But in some semiconductors, depending on the type of the dopant used there can be positive charge carriers that flow in the opposite direction of that of electrons. In other cases, there can be both positive ions and negative electrons present at the same time as in a chemical battery. Therefore there will be confusion in the direction of flow of current. Hence a convention for the flow of current was introduced which states that the direction of flow of current is in the positive direction, i.e. opposite to that of the flow of electrons. There are two basic types of Electrical Current depending on how they flow.