Difference between SNP and Mutation

SNP (Single Nucleotide
Polymorphism) is a type of mutation. Also, all mutations cannot be considered as SNP.

Single nucleotide polymorphism (SNP) is a kind of polymorphism that includes various solitary base pairs (A-T-G-C).

A change in a DNA sequence happens when a single nucleotide (adenine, thymine, guanine, or cytosine) in the genome is rearranged. Also, that specific adjustment is available in a minimum of 1% of the population.

The effect of SNPs in causing disease is a significant field of study for researchers.

The DNA grouping is unique to every creature. This DNA grouping can sometimes undergo changes such as deletion, duplication, insertion or substitution. Also, they lead to the changes in the proteins transcripted by the DNA. This change in its base pair is termed mutation. 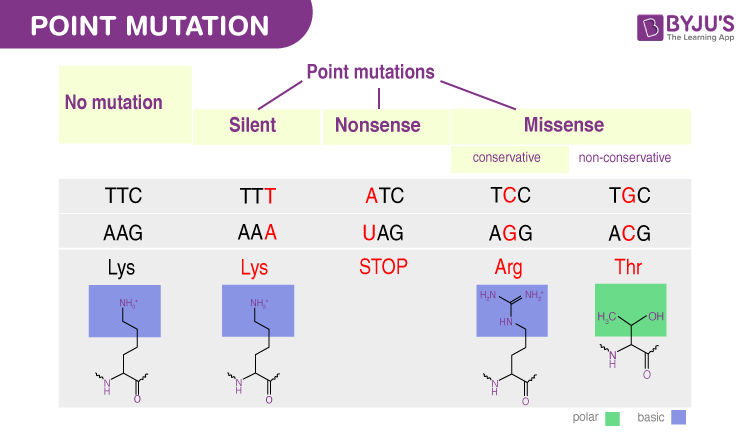 Difference between SNP and Mutation

What are the base pairs in a DNA sequence?

The DNA structure is composed of nitrogenous bases or nucleotides. The four base pairs in a DNA sequence are adenine (A), guanine (G), cytosine (C), and thymine (T). Also, A pairs only with T and G pairs with C.

Does SNP affect the gene function?

What are the causes of mutation?

The majority of the changes happen when the DNA fails to duplicate precisely. This multitude of changes leads to evolution in an organism.
The major internal cause for this mutation or change is the cell division process. The DNA makes its own copy during the cell division process. Thus, they act as an internal cause. The external cause could be radiation or chemicals that bring about a change in the DNA sequence.
Also Read: Mutagens

What are missense, nonsense and silent mutations?

Missense mutation occurs due to a change in base pairs that leads to different amino acids. Nonsense is the change in a sequence that helps release the stop codon. Thus, they do not code for any amino acid. Silent mutations refer to changes that do not affect the amino acid sequence.