Ginger (Zingiber officinale) is a herbaceous flowering plant that belongs to the family Zingiberaceae. They are perennial plants that live for more than two years. Ginger is a rhizome which is a modification of the stem. It is native to Southeastern Asia and is known for its pungent smell.

Well-Labelled Diagram of a Ginger Rhizome 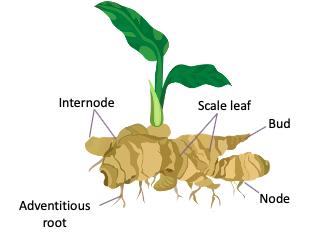 Ginger is mainly cultivated in Southeast Asian countries such as China, India, Indonesia, Philippines, Thailand, Nepal and Bangladesh. China and India are the major suppliers of the spice all over the world.

The plant is cultivated by planting root stalk cuttings and does not require seeds for propagation. The rhizome is harvested by simply lifting it from the soil, cleansing it and drying it in the sun. The dried rhizome is irregular, palmate and branched in appearance. Its colour varies from dark yellow to light brown to pale buff.

Use in Food Processing: Fresh ginger, ginger paste and oleoresin has carminative properties that is used in all kinds of food giving it a biting taste, flowery and spicy flavour. Ginger preserve and candy are used as confectionery items. It is also used in pickling, teas and making soft drinks. It is used in heavy food items as it possesses digestive properties.

Medicinal Uses: Ginger rhizome is a rich source of zingiberene, α-curcumene, gingerols, and shogaols. These phytochemical components give it antioxidant, anti-inflammatory, antimicrobial and antilipidemic properties.

Stay tuned to BYJU’S Biology for more such information.