What is Occupational Structure?

The occupational structure of a nation refers to the percentage of its workforce employed in various economic ventures. To put it in other words, articulating the number of the total working population employed in agriculture and associated activities and the number of them involved in the manufacturing and service sectors can be identified from the occupational structure of the nation.

During the colonial period, the occupational structure of India, i.e., the allocation of working people across various industries and sectors, explicated small hints of change. The agricultural sector valued for the highest share of the workforce, which normally prevailed at a high of 70–75%, while the manufacturing and service sectors estimated for only 10 and 15-20% sequentially. Another outstanding perspective was the growing geographical variation. Parts of the then Madras Presidency (including areas of the present-day states of Tamil Nadu, Kerala, Andhra Pradesh, and Karnataka), Bombay, and Bengal observed a drop in the dependence of the workforce on the agricultural sector with a corresponding increase in the production and the services sectors. However, there was an increase in the share of the workforce in agriculture during the same time in the states like Rajasthan, Odisha, and Punjab. 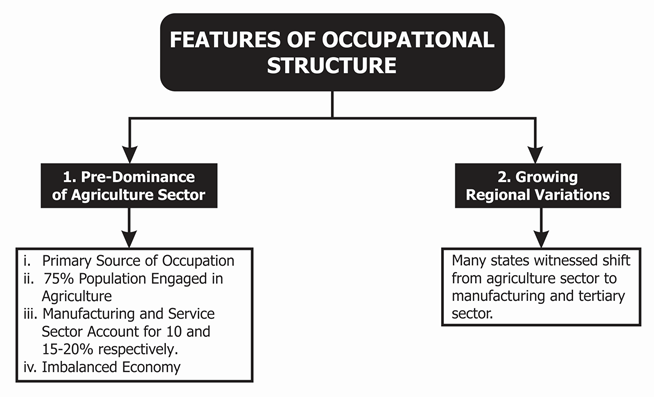 Following are the features of India’s occupational structure:

Predominance of the agricultural sector

States like Tamil Nadu, Andhra Pradesh, Kerala, Karnataka, Maharashtra, and West Bengal witnessed a shift of dependence of the workforce from the agricultural sector to manufacturing and the service sectors.

However, there had been an increase in the share of the workforce in agriculture during the same time in states such as Odisha, Rajasthan, and Punjab.