The term ‘debenture’ is derived from the Latin word ‘debere’ which refers to borrow. A debenture is a written tool accepting a debt under the general authentication of the enterprise. It comprises of an agreement for repayment of principal after a particular period or at intermissions or at the option of the enterprise and for payment of interest at a fixed rate due to, usually either yearly or half-yearly on fixed dates. According to the section 2(30) of The Companies Act, 2013 ‘Debenture’ comprises of – Debenture Inventory, Bonds and any other securities of an enterprise whether comprising a charge on the assets of the enterprise or not. 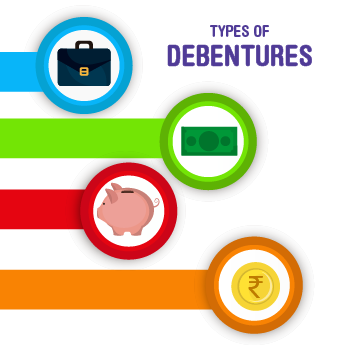 #1. From the Point of view of Security

#2. From the Point of view of Tenure

#3. From the Point of view of Convertibility

#4. From Coupon Rate Point of view

#5. From the view Point of Registration

The above mentioned is the concept, that is elucidated in detail about the Types of Debentures for the class 12 Commerce students. To know more, stay tuned to BYJU’S.