Force of attraction is a force that pulls the body near due to its attraction. There are numerous attractive forces prevailing in nature. Some of them are magnetic force, electric force, electrostatic force and gravitational force. Gravitational force is very well-identified instance force of attraction as it draws objects towards itself regardless of its distance. Newton’s universal law of gravitation clarifies a lot more about how this force performs. It states that every mass that occurs in the universe attracts some or the other mass in the universe. It validates the fact that anyone thrown up comes down. 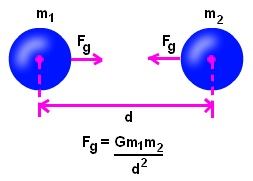 The formula for the force of attraction is articulated as,

This formula aids out in calculating the force acting amongst any two bodies having a greater mass since in smaller masses this force is insignificant.

The force due to gravity is articulated as,

Therefore, the gravitational force is