Dicotyledons are members of flowering plants in the Plant Kingdom that consist of two cotyledons in the embryo of their seed. More than 175,000 species of dicots are known today. The most common examples include roses, magnolias and geraniums.

A dicot plant is well differentiated into roots, stems and leaves. Flowers consist of petals, sepals, pistil and stamen. The leaves have a well-built vascular system for the transport of food and nutrients throughout the plant.

This article focuses on describing the anatomy of a dicot leaf. Find a well-labelled and simple diagram of the transverse section (t.s.) of a dicot leaf below.

T.S. of a Dicot Leaf 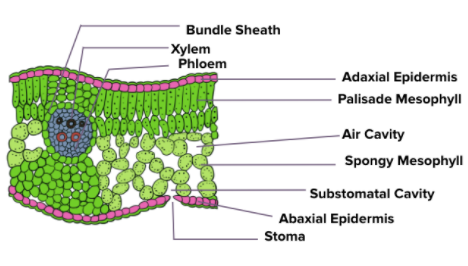 Anatomy of a Dicot Leaf

This sums up the anatomy of a dicot leaf. Stay tuned to BYJU’S for more such interesting topics related to NEET.