A concept map is an educational tool that creates an ambience of ideas around every main concept of the subject.

Learn more in detail about the classification of Evolution in this concept map. 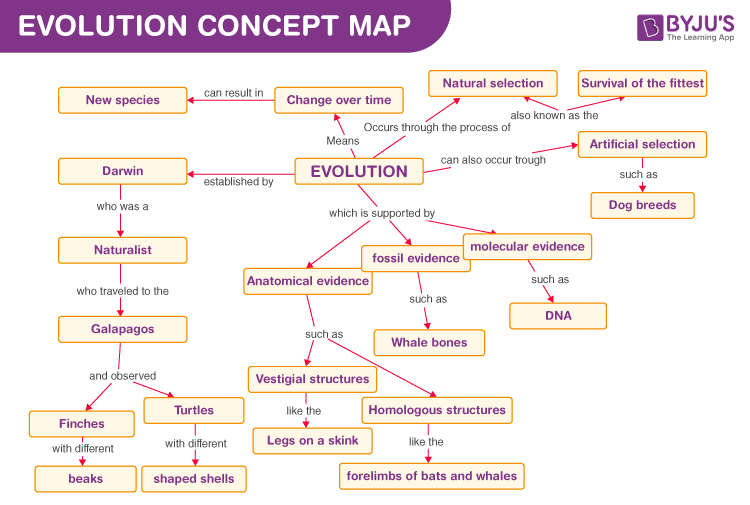 Evolution is an interesting topic of Biology, which explains and makes us understand the living world around us. Evolution mainly describes the change in characteristics of a species over a huge period of time.

Biological evolution is a great and stirring account of life on Earth and of human origins within. The evolution concept maps are useful tools in meaningful learning.

A concept map of evolution is a tool to encourage meaningful learning in students.

This concept map of evolution explains human connectivity to the rest of life on Earth along with the stages of human evolution.

Understanding evolution ideas is seen as central to building an integrated knowledge of biology. However, the theory of evolution has been found difficult to understand. This concept map helps students to organize and makes learning more interactive.

Explore other concept maps only at BYJU’S Biology.

Evolution is defined as the process by which the organisms change over time as a result of changes in genetic, physical appearance and behavioural traits over several generations. Evolution mainly depends on the process of natural selection, mutation and genetic drift.

Who Is Known As The Father Of Evolution?

Charles Darwin, an English naturalist of the 19th century is known as the Father of evolution due to his discoveries on the theory of evolution.

Fossils are the only evidence for the existence of extinct species.
They are the remains of the non-degraded parts of living things, which are found in sedimentary rocks, low-grade metamorphic rocks, within the surrounding rocks near the river valleys, cliffs and hillsides.