The roots of some plants are modified to perform specific functions. For example, the roots of carrot and turnip get swollen to store food.

The two major types of root systems are – 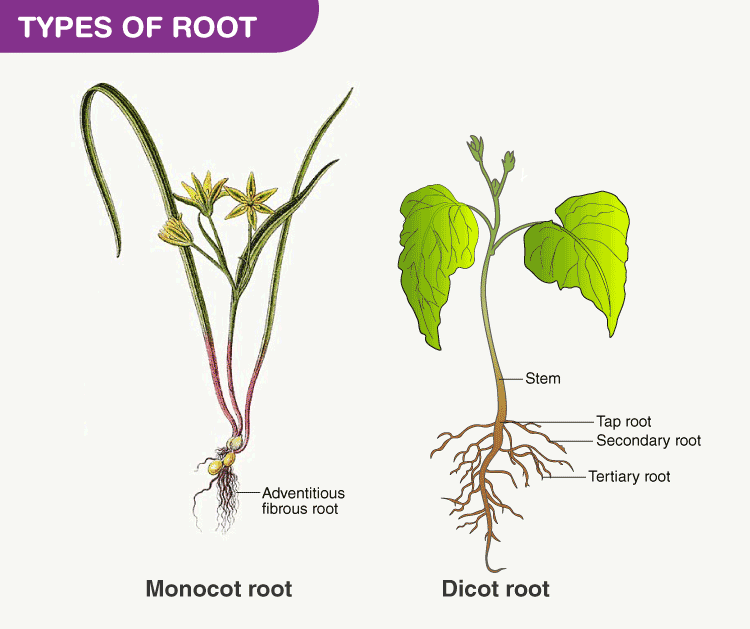 They are adventitious roots that support the aerial branches. The prop roots are aerial roots that are found above the ground. Example – Roots of banyan and fig. The downward roots give a pillar-like appearance, and are also known as pillar roots.

The adventitious roots that develop from the base of stem nodes are called stilt roots. They grow in the downward direction and join the soil substratum. Usually, they provide mechanical support to the weaker stems. They also facilitate faster vertical growth of the stem. Example – Roots of sugarcane and maize.

In some plants (especially in the swampy area), the roots come out of the ground and grow vertically upwards. These roots are known as pneumatophores. They help the plant to get oxygen for respiration. Example – Roots of Rhizophora.

What is a tap root system?

They are the main root from which other roots sprout laterally. They are straight, thick structures that grow vertically deeper. These roots are most seen in dicots. The taproots of turnip and carrot are swollen to store food.
Also see: Dicot and Monocot Roots

What is the difference between taproot and fibrous root?

What is a strangler fig?

Many Ficus of the tropical forest shows a ‘strangling growth’. This growth is also seen in some banyans and vines. The roots of these trees grow downwards around the stem of the host plant. At times, they seem like strangling the host. Thus, they are termed as strangler fig.