English poems are fun to read. Reciting poems is such an exciting activity. The stress on particular words, the variation in pitch, new words to discover, the perception of the poet, finding your own opinion about the topic at hand- there’s so much to learn and enjoy about poems.

Mr Nobody Poem for Class 2 is one of the poems in the CBSE English curriculum. Given below is the poem followed by Mr Nobody Poem summary. Click the link below to download the poem in colourful PDF format. 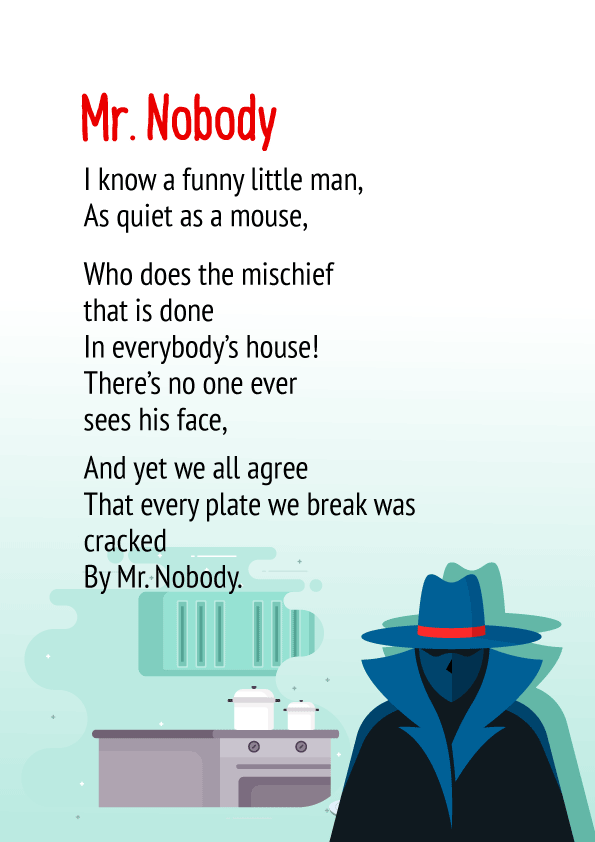 The original Mr Nobody Poem has 3 stanzas with 8 lines each. For Class 2, only the first paragraph has been taken, which consists of 8 lines. The poem talks about a little man (probably indicates a kid) whom no one has seen. This little man is very quiet and does all the mischief in everyone’s house. He is the one to be blamed for every broken plate.

The poem seems to just portray family life, where kids do mischievous things but instead of blaming them, the family says that Mr Nobody has done it.  Even kids themselves don’t accept their faults to escape scolding. It’s easier to blame it on someone else. That ‘someone else’ happens to be Mr Nobody!

That was quite an interesting poem, wasn’t it? There are many other exciting English poems for Class 2 kids to be read, recited and enjoyed.

Hurry up and check the Kids Learning page to get all the amazing poems and other resources for your Class 2 kid.