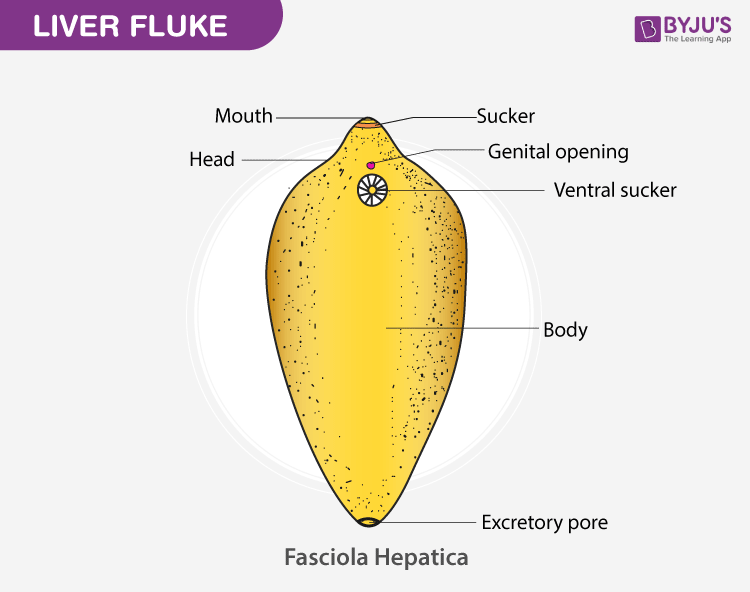 Let’s look at the life cycle of liver fluke to get a better understanding.

The adult female liver fluke parasite passes immature eggs in the bile duct and comes out into the environment through the faeces. If and when the eggs come in contact with water, the eggs become embryonated and form into a larva called miracidia.

A miracidia larva infects a snail and the miracidia larva transforms into cercaria larvae. Here, the snail acts as an intermediate host and the cercaria larvae has a long tail that helps them swim in the water. The cercaria larva grows, leaves the snail host and looks for vegetation, where it forms cysts called metacercariae. Metacercariae is the infective stage in animals like sheep and cattle and in human beings. Metacercariae have a rigid hard outer layer, which helps them live for longer periods of time. When human beings consume the contaminated water or fish contaminated with the cysts, the cysts release immature eggs into the small intestine of the human host.

The fluke parasite penetrates the small intestinal wall and enters the peritoneal cavity. After this, it enters the liver and the parasite starts feeding on liver cells. This occurs a few days after the host comes in contact with the parasite. After eating plenty of liver cells, the young flukes migrate to the bile duct and transform into adult liver flukes.

Liver flukes are primarily large, flat parasitic worms that are found in the liver, causing a disease known as fascioliasis. Liver fluke parasites are most prominent in parts of Australia as well as in the regions with several water bodies like irrigation channels, slow-streaming rivers and so on.

How does one know they have liver fluke?

At first, the ingestion of the parasite will not show any symptoms, depending upon the species. However, later when the parasite becomes infective, it shows symptoms like fever, chills, abdominal pain, liver inflammation, nausea and so on.

Liver flukes are not contagious and cannot transfer from one person to the other. They spread is from contaminated fish or water that humans consume.

How big are liver flukes?

The liver fluke measures up to 15mm in length and 0.1 mm in width.

Can one see liver fluke in stool?

Eggs of Clonorchis, Opisthorchis or Fasciola are seen in the faeces of the human host. It can also be found in the small intestine.

To explore more information about liver flukes and other parasites, register at BYJU’S Biology.