Phases of Meiosis I

There are 4 stages of meiosis, prophase is the longest meiosis stage and it comprises five sub-phases under it.

Also Refer: What are the sub-stages of prophase 1 of Meiosis 1?

In this meiosis phase, the pairs of homologous chromosomes move up the equator of the cell and line up on the metaphase plate. The process is called random assorting where maternal and paternal chromosomes line up in random order, aligning themselves on either side of the equator, which leads to genetic diversity among offspring.

The two chromosomes of bivalent separate and move to the opposite sides of the cell. Non-sister chromatids stay connected whereas homologous chromosomes are separated.

In this meiosis phase, the decondensation of chromosomes occurs., later the chromosomes are completely separated and the nuclear envelope forms. Cytokinesis is the process where the plasma membrane is divided into two daughter cells. 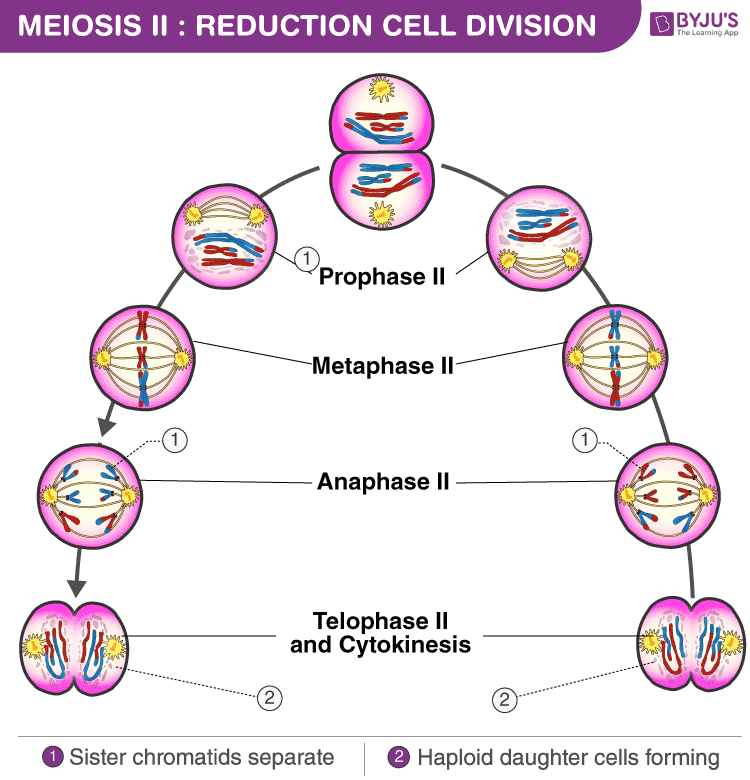 In this meiosis phase 2, which is the second meiotic division, the non-sister chromatids completely separate. The four aspects of Meiosis 2 are Prophase 2, Metaphase 2, Anaphase 2 and Telophase 2. The stages of meiosis 2 are as follows:

Why is meiosis II considered similar to mitosis?

Mitosis occurs in the somatic cells and here, a parent cell divides to form two daughter cells while retaining the same number of chromosomes as the parent cell. However, meiosis takes place in the germinal cells. There are 2 types of divisions in meiosis- Meiosis-I and Meiosis-II. When a germinal cell, after completing meiosis-I, enters into Meiosis-II, there is no change in the number of chromosomes, just like in mitosis. Hence, it is considered similar to mitosis.

How do the haploid cells formed during meiosis but why is this not happening in mitosis?

After mitosis two identical cells are created with the same original number of chromosomes, 46. Haploid cells that are generated through meiosis, such as eggs and sperm, only have 23 chromosomes, because, remember, meiosis is a “reduction division.” Makes all cells other than gametes.
Meiosis produces 4 haploid cells. Mitosis produces 2 diploid cells. The old name for meiosis was reduction/ division. Meiosis I reduces the ploidy level from 2n to n (reduction) while Meiosis II divides the remaining set of chromosomes in a mitosis-like process (division).
Test your knowledge on Meiosis Phases
Q5