In the last chapter, we learnt about the Union legislature, which included the structure and functioning of the Parliament. In this chapter, we are going to study the Union Executive. If students find any difficulty understanding the concepts related to the chapter, then they can blindly refer to MSBSHSE Class 8 solutions of Social Science Chapter 3. These solutions are proved to be the correct guide for solving the textbook questions.

Q1. Choose the correct option and rewrite the statement.

Answer 1: In India, the executive power is vested in the President.

Answer 2: The tenure of the President is of five years.

Answer 3: The Council of Ministers is led by the President.

(1) The President, the Prime Minister, the Council of Minister are called the –

Answer 1: The President, the Prime Minister, the Council of Ministers is called the Union Executive.

Answer 2: During the parliamentary session the period around 12 noon is known as Zero Hour.

Q3. Write on following concepts in your own words.

Answer 2: No-confidence motion – This is one of the most effective ways to keep a check on the Council of Ministers. The government stays in power till it enjoys the support of the majority in the Lok Sabha. If the members of Parliament withdraw the support, it may lead to loss of majority and the government cannot stay in power. The members of the House can move a no-confidence motion by simply expressing ‘we do not have confidence in the government’. If the motion is passed with majority support, then the Council of Ministers has to resign.

(1) Enumerate the functions of the Council of Ministers.

(2) How does the Parliament keep a check on the Executive?

Answer 1: The functions of the Council of Ministers is as follows:

Answer 2: In a parliamentary system of government the legislature tries to keep control over the executive i.e. The Council of Ministers. The control is exercised in the lawmaking or policy making process, implementation of policies and even after that. A few ways of exercising control are: 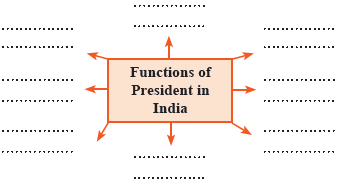 Answer: The functions of President are as follows:

Is is possible to use Maharashtra Board Class 8 Social Science Solutions Civics Chapter 3 to prepare for the exams?

Yes, Maharashtra Board Class 8 Social Science Solutions Civics Chapter 3 can be used to prepare for the exams. Students are urged to solve the questions and refer back to solutions to get a better idea on how to answer these questions more effectively.

How can we access Maharashtra Board Class 8 Social Science Solutions Civics Chapter 3 The Union Executive?

Students can now download the PDF version of the solutions from the link given. Meanwhile, these questions and the solutions are also available online on our webpage.

How can we use Maharashtra Board Class 8 Social Science Solutions Civics Chapter 3 to prepare for the exams?

These questions act as the perfect guide for Class 8 students during their final exam preparation because it is devised by qualified subject teachers according to the new Class 8 Civics Syllabus. Students can find various solved questions that will aid them to prepare well for their exams. Students can also use these solutions to get an idea about their performance, time management and exam preparation level.