Answer: Sodium bicarbonate or the baking soda is used to make soft and spongy cakes, bread and dhoklas. Since, it is an alkaline, it also helps to reduce the acidity in the stomach. Other uses include help in preparing CO2 gas as well as a content of fire extinguishers.

4. Define corrosion. What is meant by rust? Write the chemical formula of rust.

Answer:  When the surface of a metal is attacked by air, moisture or any other substance, then the metal may corrode and this phenomenon is called corrosion. The iron reacts with the moist air to gain a brown flaky coating known as rust. Meanwhile, the chemical formula for rust or hydrated iron (III) oxide is (Fe2O3.XH2O).

5. What do you do in the following situations:

i. Exposed to exhaust fumes in traffic.

ii. Exposed to a series of firecrackers with high sound level.

Answer: i. The first thing to do when you get exposed to exhaust fumes in traffic is to cover your nose with a handkerchief and immediately move away from the polluted area. You could also suggest to the vehicle owners to undergo the pollution under control (PUC) test for their vehicles so that they can avoid air pollution resulting from exhaust fumes.

ii. When exposed to a series of bursting crackers with high decibel levels, then you should cover your ears immediately, so that you are protected from any internal damage caused by such intense sound. Or if the crackers are burst in the silent zone, then you are required to immediately report the issue to the police station so that strict action can be taken. Lighting crackers could cause air and noise pollution.

Answer: Given below are some of the demerits of Mendeleev’s periodic table:

7. Draw a neat labelled diagram of the human excretory system. 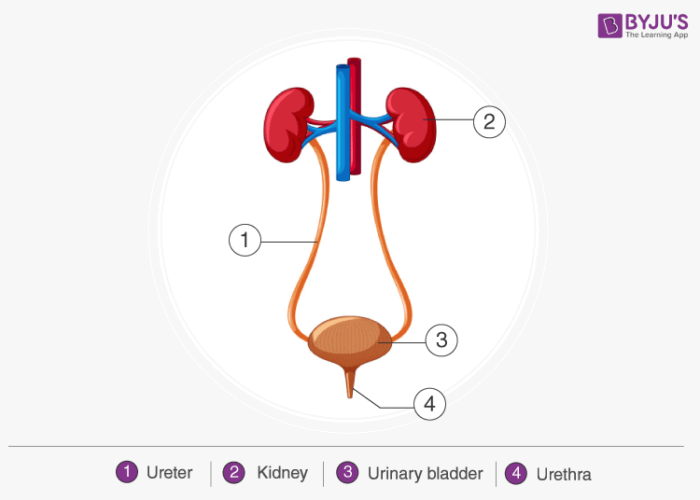 9. Explain the following reaction with the help of a balanced chemical equation: Magnesium reacts with hot water.

Answer: Magnesium when it reacts with water is known to replace hydrogen from it, in the situation if the water is boiling or it is in the form of steam.  Given below is the balanced chemical equation for this reaction:

10. What is recycling? Give one example.

Answer: Recycling is a process of collecting and selling products made from old materials and is also considered as the best solution for garbage disposal. One example is of reusing metals as natural resources. Manufacturers can make use of use metals, such as steel and aluminium, to produce household appliances, cars, construction materials and food and drink containers and so on.

11. What are vestigial organs? Give one example.

Answer: Vestigial organs are organs, tissues or cells in a body which are not functional  anymore, the way they were in their ancestral form of the trait. It is authentication of evolution and hence, were helpful in explaining adaptation. Appendix is one of the most commonly known vestigial organ.

12. Write a short note on Catenation.

Answer: The property of  a carbon element by which the atoms in it can link to one another and form long carbon chains is known as Catenation. It can also be defined as the self-linking of atoms of an element to form chains and rings. This definition can be extended to include the formation of layers like two-dimensional catenation and space lattices like three-dimensional catenation. Know more at Catenation.

13. What is the need to use eco–friendly technology?

Answer: Eco-friendly technology makes use of sustainable source of energy and leaves on adverse affect on the environment. It is also energy efficient in terms of the percentage of its energy output and input. This would be useful for the earth and helps to save the energy. Eco friendly technology, thus looks to improve in two major areas inclusive of energy efficiency and reduction of harmful waste.

14. What is embryology? How does its study lead us to understand evolution?

Answer: A branch of biology that discusses the principles of the embryos from the stage of ovum fertilization till their development is known as Embryology. This also includes the developmental process of a single cell, embryo to a baby within an average of 266 days or 9 months. However, the term Embryology, usually refers to the parental development of embryo and foetus. Now, if you take the embryology of various vertebrates, you will get strong evidence of different vertebrates showing striking resemblances. The embryos of fish, amphibians, reptiles, birds and mammals are all alike and if you compare this, you will find that all had gil slits which was later removed in life (except for fishes). This seem to support the idea of a common ancestor. Thus, we can also conclude that the developmental process for all these species are similar despite the changes that occur during their divergence.

15. What would be the consequences of the deficiency of haemoglobin in the human body?

Answer: Deficiency of haemoglobin could cause anaemia, as it is the haemoglobin present in the red blood cells that carries the oxygen to cells of the body. A reduction in this amount could cause a decrease in the oxygen-carrying capacity of blood. This would result in breathlessness and fatigue for the person. These are symptoms of anaemia.

16. Answer the following questions with respect to the sexual reproduction in plants:

i. State the name of the functional unit concerned with sexual reproduction.

ii. Name the part made up of the stigma, style and ovary.

iii. Name the swollen lower part of the carpel.

iv. Name the male part of the flower.

v. Where are the pollen grains produced?

Answer: i. Flower is the functional unit concerned with the sexual reproduction of plants

ii. Pistil is the name given for the entire female reproductive system of a flower that contains the stigma, ovary and style

iii. Ovary is the swollen part of the carpel

iv. The male part of the flower is the Stamen consisting of an anther and a filament

v. Pollen grains are produced by the male-structures of the seed bearing plants and then transported to female structures. It is the anthers of the stamen that produces the pollen grains.

Now, applying the formula to calculate the refractive index of the medium with respect to air, n = v1/v2

So, the refractive index with respect to air is 2

19. Distinguish between oxidation and reduction.

20. What major harms are done to human beings due to air pollution?

To know more about Maharashtra ssc board, register with BYJU’S. Stay tuned and get updated with 10th question paper maharashtra board.