The mystery of genetics was unlocked during the mid-nineteenth century by Gregor Mendel. He conducted an experiment on pea plants by cultivating pea plants and observing the pattern of inheritance in different stages of generation.

Mendel is the Father of genetics. He proposed three laws- Law of Independent Assortment, Law of Dominance, and Law of Segregation. These laws came into existence by experiments on pea plants with a variety of traits.

He crossed two homozygous individuals, which resulted in heterozygous offspring. This was known as the monohybrid cross.

“A monohybrid cross is the hybrid of two individuals with homozygous genotypes which result in the opposite phenotype for a certain genetic trait.”

“The cross between two monohybrid traits (TT and tt) is called a Monohybrid Cross.”

Monohybrid cross is responsible for the inheritance of one gene. It can be easily shown through a Punnett Square.

Monohybrid cross is used by geneticists to observe how homozygous offspring express heterozygous genotypes inherited from their parents.

How To Carry Out A Monohybrid Cross?

The ratios of the phenotype and the genotype that are estimated are only probabilities. Listed below are steps that can be used to calculate a monohybrid cross:

For monohybrid cross, Mendel began with a pair of pea plants with two contrasting traits, i.e., one tall and another dwarf. The cross-pollination of tall and dwarf plants resulted in tall plants. All the hybrid plants were tall. He called this as a first hybrid generation (F1) and offspring were called Filial1 or F1 progeny.

He conducted an experiment with all seven contrasting pairs and observed that the entire F1 progeny showed one pattern in their behaviour, i.e., they resembled one of the parents. Another parent character was completely absent. 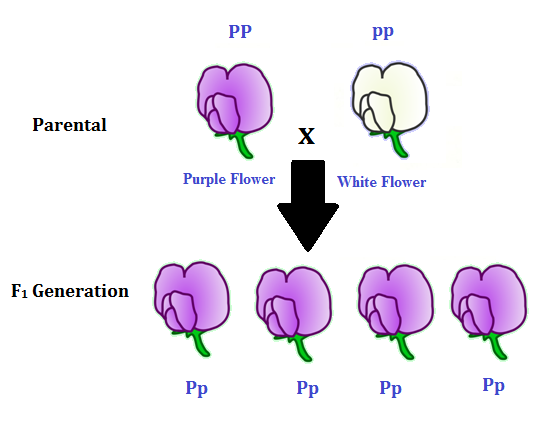 He continued his experiment with self-pollination of F1 progeny plants. Surprisingly, he observed that one out of four plants were dwarf while the other three were tall. The tall and the short plants were in the ratio of 3:1.

He also noted that no progeny was in intermediate height, i.e., no blending was observed. The result was the same for other traits of plants too, and he called them second hybrid generation and the offspring were called Filial2 or F2 progeny. 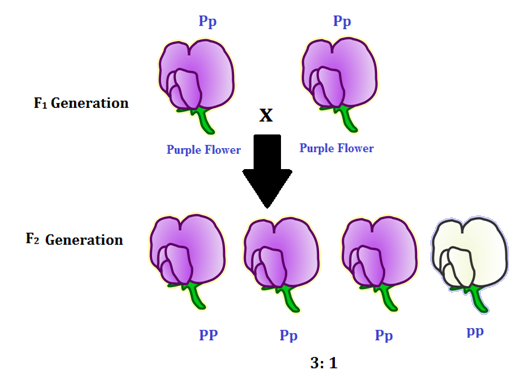 Mendel observed that traits which were absent in F1 generation had reappeared in the F2 generation. He called such suppressed traits as recessive traits and expressed traits as dominant traits. He also concluded that some ‘factors’ are inherited by offspring from their parent over successive generations.

In the first step of a monohybrid cross, the homozygous traits of an individual are crossed. In the next step, when the heterozygous traits are crossed, it is confirmed whether the trait is dominant or recessive.

There are two types of breeding processes to know the mechanism of genes and examine the inheritance of traits from parents and grandparents, one is monohybrid cross and the other is dihybrid cross. The latter occurs when the F1 generation offspring differ in two traits. It is a cross between two entities that are heterozygous for two different traits. Mendel carried out the following experiment for this cross:

A testcross is a cross that involves mating with a genotype that is unknown with a known genotype, a homozygous recessive genotype.

A homozygous recessive genotype is crossed because of the following:

Purpose of test cross: They are used to determining if a dominant phenotype is heterozygous or homozygous

Learn more about monohybrid cross, its definition, example and other related biology concepts at BYJU’S.

What is a monohybrid cross?

A monohybrid cross is a genetic mix between two individuals with homozygous genotypes which result in an opposite phenotype.

What is the difference between monohybrid and dihybrid?

What is a test cross?

A test cross is the breeding of an individual with a recessive individual. It was introduced by Gregor Mendel. It is done to determine the zygosity of the former by analyzing the proportions of offspring phenotypes.

What is a dihybrid cross?

Give an example of a monohybrid cross.

What is a monohybrid ratio?

What are pure gametes?

Pure gametes are the gametes that are haploid. The gametes are always pure and do not possess homologous chromosomes. Instead, they possess one chromosome of each type, either recessive or dominant.

Test your knowledge on Monohybrid Cross Inheritance One Gene
Q5