Q 1. Tick in front of the correct option

(a) On which of the following are slow movements in the earth’s interior dependent?

(b) When waves divert from each other, what do they create?

(c) For the formation of a rift valley, which of the following processes should occur in the earth’s crust?

(d) Which of these is a fold mountain?

(e) The formation of extensive plateaus is a result of which type of movements?

(a) Buildings collapsed at the foothills of the Himalayas because of an earthquake. Before collapsing they were moving forward and backward.

(b) There is a difference in the formation of the Meghalaya Plateau and the Deccan Plateau.

(c) Most of the volcanoes are found on the plate boundaries.

(d) The Barren Island is becoming conical in shape.

(e) Volcanic eruptions can cause earthquakes.

Answer a: Buildings collapsed at the foothills of Himalayas because of an earthquake, but before collapsing they were moving backward and forward because in hilly areas there is always rearrangement of earth plates under hills. If any major change occurs, it leads to an earthquake, in which forward and backward movement in buildings is seen.

Answer b: The internal movements of tension lead to the formation of fractures in the rocks. These fractures are called faults. When a part of the earth crust between two falls is lifted, it forms a block mountain. Meghalaya plateau is an example of such a movement. Deccan Plateau has been formed due to the fissure type volcano where the lava comes out of the crack in the earth crust and spreads all around forming a flat surface. Therefore, there is a difference in the formation of Meghalaya plateau and Deccan Plateau.

Answer c: Most of the volcanoes are very commonly found along the boundaries of the tectonic plates because this is where the sinking of the oceanic plates beneath other plates take place. These plates sink and begin heating after going into the Subduction Zone where they melt and the formation of magma takes place. Volcanoes are common there so that when the plates are pulled apart the magma can rise from the bottom of the earth’s mantle.

Answer d: Barren island is known as India’s only active volcanic land. It is located in Andaman and Nicobar. In January some scientist noticed a difference in the shape of the Barren island as it has started to show the signs of a volcanic eruption.When a volcano is about to occur,The shape of land starts to become conical.

(a) Tsunamis are generated in coastal areas.

(b) The Himalayas are an example of fold mountains.

(c) Molten magma is thrown out of the earth’s mantle.

(d) Rift valley is formed because of faulting.

Answer a: Tsunamis are caused due to sudden internal movements within the earth’s crust below the ocean floor that lead to earthquakes and volcanic eruptions.

Answer b: Himalayas are formed by compression that lead to folding of the softer rocks.

Answer c: Molten magma is thrown out to earth’s mantle. The type of internal movement is convection currents. The plates diverge due to the pressure created by the currents. This causes the magma to be thrown out to the earth’s crust.

Answer d: A rift valley is a linear-shaped lowland between several highlands or mountain ranges created by the action of a geologic rift or fault. A rift valley is formed on a divergent plate boundary, a crustal extension, a spreading part of the surface, which is subsequently further deepened by the forces of erosion.

Q 4. Arrange the following statements in chronological order in which an earthquake occurs.

(a) The earth’s surface vibrates

(b) The plates suddenly move.

(c) Due to the movements in the mantle, compression goes on increasing.

Answer: (b) The plates suddenly move.

(e) Stored energy is released in the form of seismic waves.

(c) Due to the movements in the mantle, compression goes on increasing.

(a) The earth’s surface vibrates

(a) Block Mountain and Fold Mountain

(b) Primary and Secondary Seismic Waves

Answer c: The difference between volcano and earthquake:

(a) Give reasons why an earthquake occurs.

(b) Which type of movements have led to the formation of the major fold mountains in the world?

(d) What are the effects of earthquakes on the earth’s surface and human life?

(f) Explain the types of volcanoes on the basis of periodicity of eruption with examples.

Answer a: Earthquakes: Owing to the movements occurring in the interior of the earth, tremendous tension is created in the earth’s crust. When the tension goes beyond limits, the energy is released in the form of waves. This results in trembling of the earth’s surface, i.e. earthquakes occur. The magnitude of the earthquake is measured by the Richter scale.

Answer b: Energy is transferred from the interior of the earth. Because of these energy waves and pressure working towards each other and in horizontal direction, the layers of the soft rocks form folds. If the pressure is very high, large scale folds are formed and their complexity increases. As a result, the surface of the earth gets uplifted and fold mountains are formed.

Answer c: If the magnitude of the earthquake is high, that means there will be more vibration and shaking of the ground which will disturb the foundation of the buildings. Higher the shaking, higher is the chance of the buildings collapsing.

Answer e: Earthquakes generate three types of seismic waves: P (primary) waves, S (secondary) waves and surface waves. Both P and S waves penetrate the interior of the Earth while surface waves do not. Due to this, P and S waves are known as “body waves”. Surface waves arrive last and are the least interesting to seismic tomography because they don’t penetrate deep inside the Earth, therefore provide little information about inaccessible terrain.

Answer f: On the basis of the type of eruption, volcanoes can be divided into the following types:

Central-type or conical volcano: During eruption, the molten magma comes out through a pipe-like vent inside the earth’s surface. The lava spreads around the mouth of this vent when it comes out. As a result, cone shaped mountains start forming and conical volcanic mountains are formed. Mt. Fujiyama in Japan and Mt. Kilimanjaro in Tanzania are examples of central-type volcanoes and conical mountains.

Q 7. Show the epicentre, focus and the primary, secondary and surface waves of an earthquake with the help of a neat labelled diagram. 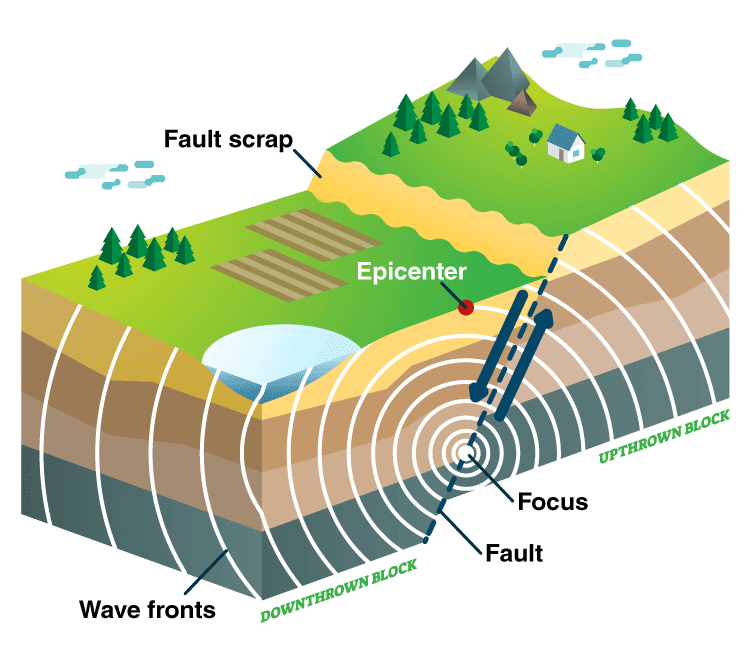 Q 8. Show the following on a given outline map of the world. 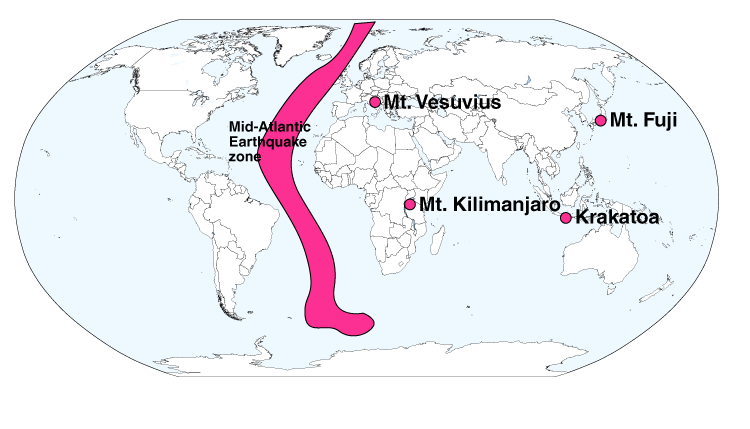 Why use Maharashtra Board Class 9 Social Science Solutions Geography Chapter 2 to prepare for the exams?

These questions act as a perfect guide for Class 9 students during their board exam preparation as it is created by qualified subject teachers, according to the latest Class 9 Social Science Geography Syllabus. Students can discover various solved questions and exercises that will aid them to prepare well for board exams. Students can identify the mistakes early on and avoid making any in the exams. This is also a good tool to gauge one’s performance, exam preparation level and time management skills.

Yes, students can easily download the solutions from the link given. And these solutions and questions are also provided online on the webpage.

Are these Maharashtra Board Class 9 Social Science Solutions Geography Chapter 2 useful for students?

Yes, these solutions are very useful. Students are advised to practise solving these solutions after revising the chapter, as they may form the basis for the questions that are asked in the board exams.