Difference Between Endospore and Exospore

Spores are the unicellular and reproductive structures, which are greatly resistant to extreme environmental conditions, like high temperature, pH, salt concentration, etc. Such reproductive structures exist in variable, sizes, shapes and numbers. The phenomena of the formation of spores by the vegetative cells are termed Sporulation or Sporogenesis.

Based on the positions, these spores are broadly classified into two types:

Endospores and exospores are two varieties of spores or the reproductive structures generated as resting systems.

Endospore is the common type of spores produced mainly by bacteria.

Here, in this article let us explore more in detail the differences between Endospore and Exospore. 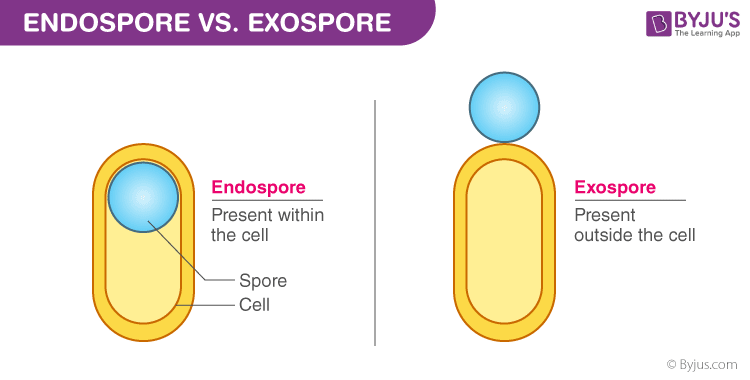 This concludes the major difference between the endospores and exospores. For more information on spores, sporulation, their types and functions, keep visiting our website at BYJU’S Biology.

Frequently Asked Questions on Difference Between Endospore and Exospore

What is the function of an Exospore?

Exospores are reproductive cells released from the parent organisms. They develop into a new organism.

What is the difference between Akinetes and endospores?

What is Endospore staining in microbiology?

E. Coli is a gram-negative bacteria present in the intestines. It does not form endospores.

Test Your Knowledge On Difference Between Endospore And Exospore!
Q5