Identity Matrix is the matrix which is n × n square matrix where the diagonal consist of ones and the other elements are all zeros. It is also called as a Unit Matrix or Elementary matrix. It is represented as In or just by I, where n represents the size of the square matrix. For example,

We can also say, the identity matrix is a type of diagonal matrix, where the principal diagonal elements are ones, and rest elements are zeros. Let’s study about its definition, properties and practice some examples on it. 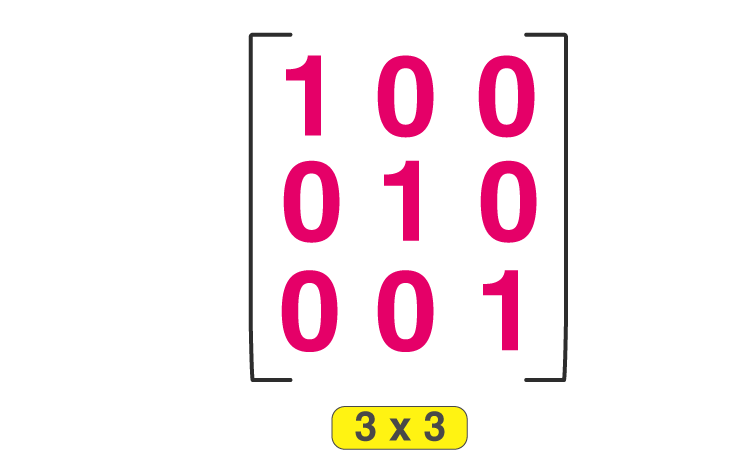 Identity Matrix is donated by In X n, where n X n shows the order of the matrix.

1) It is always a Square Matrix

These Matrices are said to be square as it always has the same number of rows and columns. For any whole number n, there’s a corresponding Identity matrix, n x n.

2) By multiplying any matrix by the unit matrix, gives the matrix itself.

So the size of the matrix is important as multiplying by the unit is like doing it by 1 with numbers. For example:

3) We always get an identity after multiplying two inverse matrices.

If we multiply two matrices which are inverses of each other, then we get an identity matrix.

Solution: The unit matrix is the one having ones on the main diagonal & other entries as ‘zeros’.

Solution: No, It’s not an identity matrix, because it is of the order 3 X 4, which is not a square matrix.

Solution: No, it is not a unit matrix as it doesn’t contain the value of 0 beside one property of having diagonal values of 1.

Visit BYJU’S – The Learning App to explore a fun and interesting way to learn Mathematics.