Also, get the MCQs for Class 10 Maths Chapter 10 Circles here.

Important questions with solutions for chapter 10 circles are given here for class 10 students, who are going to give board exams. Practice these questions and increase your chances to score good marks.

Q.1: How many tangents can be drawn from the external point to a circle?

Answer: Two tangents can be drawn from the external point to a circle.

Q.2: Given: A triangle OAB which is an isosceles triangle and AB is tangent to the circle with centre O. Find the measure of ∠OAB.

Answer: The measure of ∠OAB in the given isosceles triangle OAB will be 45 degrees.

Q.3: What should be the angle between the two tangents which are drawn at the end of two radii and are inclined at an angle of 45 degrees?

Answer: The angle between them shall be 135 degrees.

Q.4: Given a right triangle PQR which is right-angled at Q. QR = 12 cm, PQ = 5 cm. The radius of the circle which is inscribed in triangle PQR will be?

Answer: The radius of the circle will be 2 cm.

Answer: A tangent is a line which meets the circle only at one point.

A secant is a line which meets the circle at two points while intersecting it. These two points are always distinct.

Answer: If we collect all the points given on a plane and are at a constant distance, we will get a circle. The constant distance is the radius and the fixed point will be the centre of the circle.

Q.1: From a point Q, the length of the tangent to a circle is 24 cm and the distance of Q from the centre is 25 cm. Find the radius of the circle.

By using Pythagorean theorem in △OPQ,

Therefore, the radius of the given circle is 7 cm.

Q. 2: Prove that the tangents drawn at the ends of a diameter of a circle are parallel. 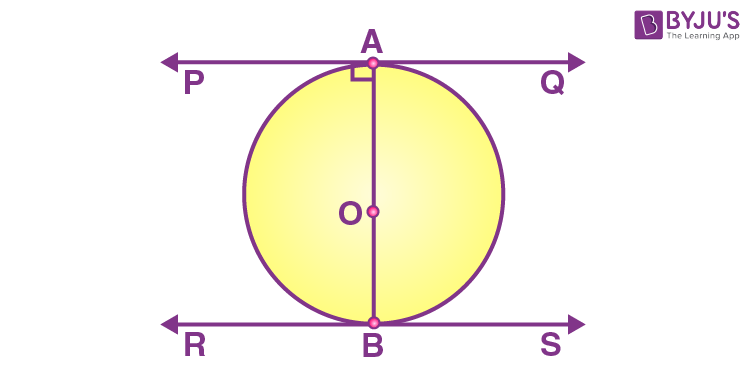 So, it can be said that line PQ and the line RS will be parallel to each other.

Q. 3: A quadrilateral ABCD is drawn to circumscribe a circle as shown in the figure. Prove that AB + CD = AD + BC 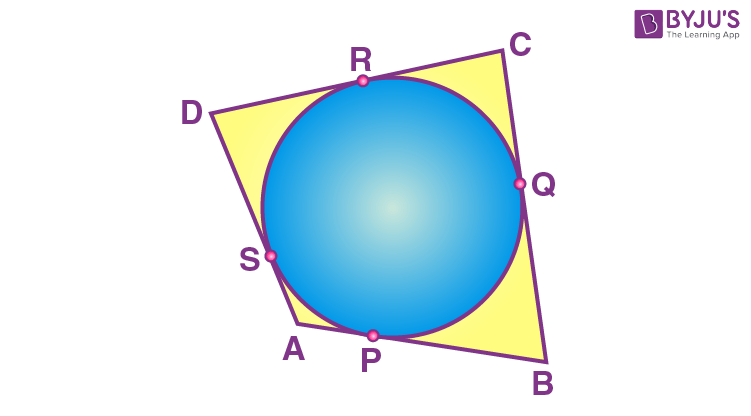 Q. 4: Two concentric circles are of radii 5 cm and 3 cm. Find the length of the chord of the larger circle which touches the smaller circle.

Draw two concentric circles with the centre O. Now, draw a chord AB in the larger circle which touches the smaller circle at a point P as shown in the figure below.

Since the perpendicular from the centre of the circle bisects the chord, AP will be equal to PB

Hence, the length of the chord of the larger circle is 8 cm.

A triangle ABC with BC = a , CA = b and AB = c . Also, a circle is inscribed which touches the sides BC, CA and AB at D, E and F respectively and s is semi perimeter of the triangle 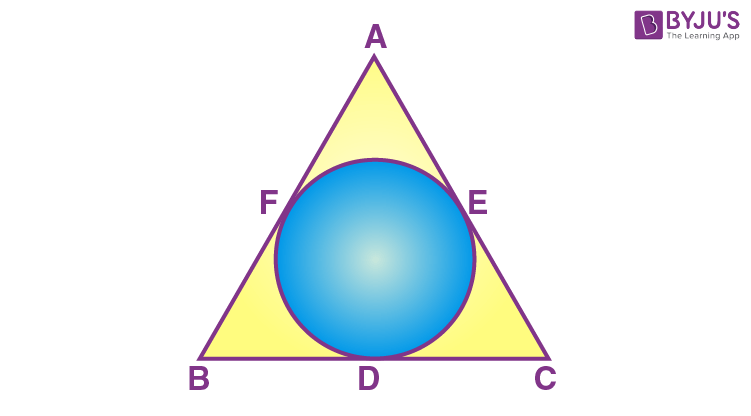 Tangents drawn from an external point to a circle are equal

Adding BD both side,

Q.6: In the figure, two tangents TP and TQ are drawn to a circle with centre O from an external point T, prove that ∠PTQ = 2OPQ.

Now, by using the theorem “the lengths of tangents drawn from an external point to a circle are equal”, we can say TP = TQ. So, TPQ is an isosceles triangle.

By using the theorem, “the tangent at any point of a circle is perpendicular to the radius through the point of contact”, we can say ∠OPT = 90°

Q.7: Prove that the lengths of tangents drawn from an external point to a circle are equal.

Consider a circle with the centre “O” and P is the point that lies outside the circle. Hence, the two tangents formed are PQ and PR.

To prove the tangent PQ is equal to PR, join OP, OQ and OR. Hence, ∠OQP and ∠ORP are the right angles.

Thus, by using the CPCT rule, the tangent PQ = PR. 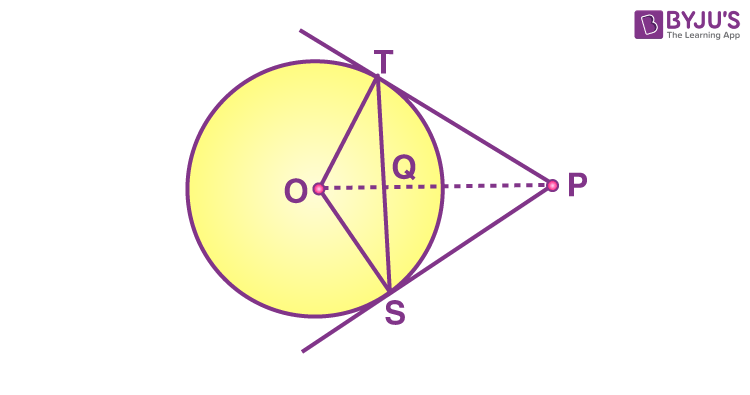 Given that from an external point P, Two tangents PT and PS are drawn to a circle with center O and radius r and OP = 2r

∠OTS = ∠OST {angles opposite to equal sides are equal} ….(i)

A tangent drawn at a point on a circle is perpendicular to the radius through point of contact.

Now substituting this value in (iii), 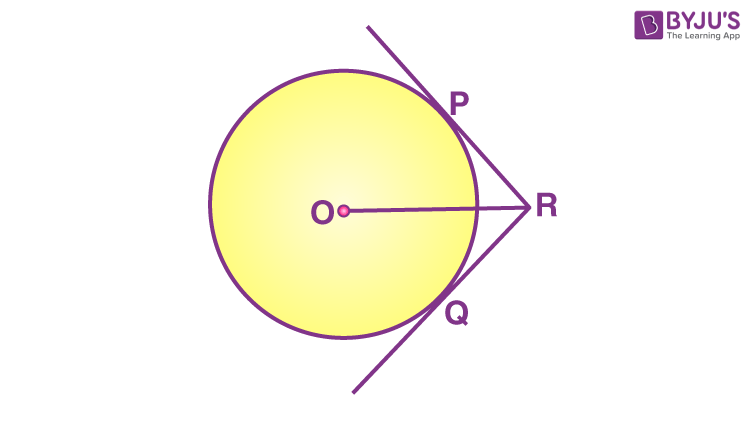 Given, two tangents RQ and RP are drawn from an external point R to the circle with centre O. ∠PRQ = 120°

RQ and RP are the tangent to the circle.

OQ and OP are radii

From both the results, we have

Q.10: Prove that the tangent drawn at the mid-point of an arc of a circle is parallel to the chord joining the endpoints of the arc.

Let mid-point of an arc AMB be M and TMT’ be the tangent to the circle. 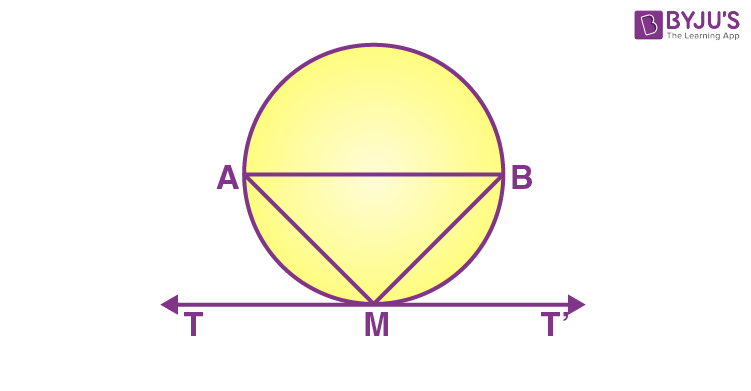 Since, TMT’ is a tangent line.

But ∠AMT and ∠MAB are alternate angles, which is possible only when AB || TMT’

Therefore, the tangent drawn at the mid-point of an arc of a circle is parallel to the chord joining the end points of the arc.