Geometry is the most practical branch of mathematics that deals with shapes and sizes of figures and their properties. Geometry can be categorized into Plane and Solid Geometry. Plane geometry deals with flat shapes like lines, curves, polygons, etc., that can be drawn on a piece of paper. On the other hand, solid geometry is about three-dimensional objects such as cylinders, cubes, spheres, etc. Here we shall discuss a few fundamental elements of plane geometry – curve, angle and polygon.

A curve is a smoothly flowing line that you can draw on a paper without using a ruler. The random lines that you doodle on paper are also curves.

There are three types of the curve: 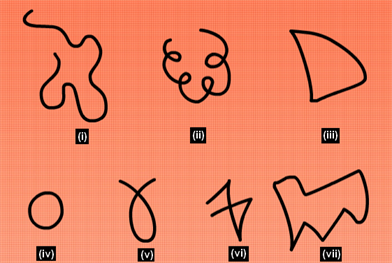 An angle is an inclination of two rays that emerges from a common point. This point is called the vertex of the angle and the two rays forming the angle are called its arms or sides.

In the following figure:

In the following polygon:

Test your Knowledge on Polygon, Curve and Angle
Q5