Subtraction is one of the four basic arithmetic operations in mathematics. We can observe the applications of subtraction in our everyday life in different situations. For example, when we purchase fruits and vegetables for a certain amount of money say Rs. 150 and we have given a Rs. 200 note to the vendor. Now, the vendor returns the excess amount by performing subtraction such as 200 – 150 = 50. Then, the vendor will return Rs. 50. 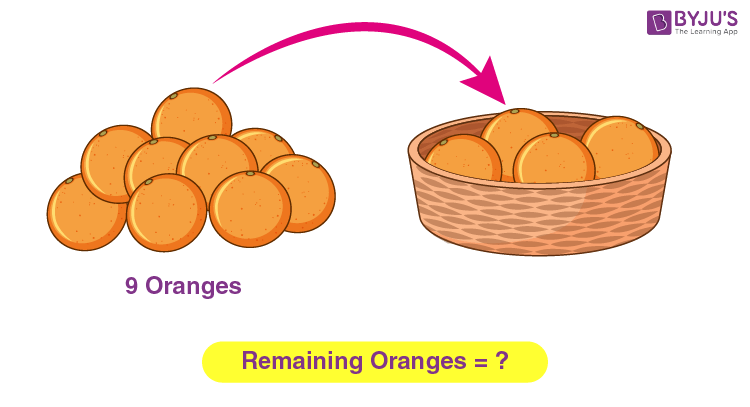 In this article, you will learn the meaning and definition of subtraction in maths, the symbol for subtraction, rules, how to subtract numbers in different ways such as subtraction of numbers on the number line along with examples and properties of subtraction.

Subtraction represents the operation of removing objects from a collection. The minus sign signifies subtraction −. For example, there are nine oranges arranged as a stack (as shown in the above figure), out of which four oranges are transferred to a basket, then there will be 9 – 4 oranges left in the stack, i.e. five oranges. Therefore, the difference between 9 and 4 is 5, i.e., 9 − 4 = 5. Subtraction is not only applied to natural numbers but also can be incorporated for different types of numbers. That means we can also describe decreasing or removing physical and abstract quantities with various sets of objects such as negative numbers, fractions, rational & irrational numbers, decimals, functions, matrices and vectors.

However, the parts of the subtraction can be shown as: Subtraction can be performed on single-digit, double-digit, triple-digit numbers and so on. Single-digit subtraction is quite simple as shown in the below examples.

Subtraction of a single digit from a two-digit number:

In this case, subtraction of digits may involve borrowing from the adjacent digit.

Consider the second sum from the above figure.

The subtraction of integers involves three possibilities such as:

For easy computation, we have to convert the subtraction problems into additional problems. This contains two steps as given below:

The properties of subtraction of integers are tabulated below.

Let us consider the below example to understand the subtraction of numbers on the number line.

An important key for solving word problems on subtraction is given below.

Suma has 12 pens. Her friend Jessi has 5 pens less than Suma. How many pens does Jessi have?

As we know, the term “less than” refers to the incorporation of subtraction.

Subtraction of numbers possess some properties as given below:

What is subtraction? Give an example.

What is the subtraction rule?

Where do we use subtraction?

Whenever we require the difference of numbers or balance of the amount, we perform the subtraction. For example, when we purchase some items in a store and pay a certain amount of money which is more than the actual bill, then we need to subtract these amounts to get the balance.

What is the symbol of subtraction?

What are the parts of a subtraction sentence?