Digestion is a vital process where complex food substances are broken down into simpler and absorbable molecules so that it could be easily absorbed by the different cells and tissues.

The diagram of the human digestive system is useful for both Class 10 and 12. It is one among the few important topics, which are repetitively asked in the board examinations.

The diagram below shows the structure and functions of the human digestive system. 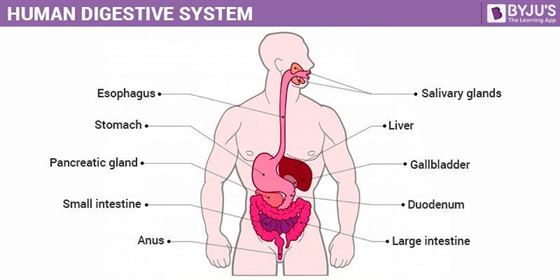 Let learn the different parts of the human digestive system.

Mouth — It includes teeth, salivary glands and tongue. It is the beginning of the digestive tract and the process of digestion begins from the mouth, where teeth help by breaking and grinding the food molecules followed by the saliva mixing with the food particles.

Pharynx –It is a fibromuscular, Y-shaped tube-like structure, attached to the terminal end of the mouth. It is involved in the passage of chewed food from the mouth through the esophagus.

Esophagus —This is a muscular tube, measuring 25 cm long and located near the trachea connecting to the pharynx. It is the upper part of the gastrointestinal tract and is mainly involved in delivering the food particles from the mouth to the stomach.

Stomach –It is a hollow and muscular organ, situated towards the left side of the abdominal cavity and beneath the diaphragm. It is a vital organ, which functions by storing the food, provides enough time to digest meals, produces hydrochloric acid and digestive enzymes that maintain the process of digestion.

Small Intestine –It is a thin and long tube-like structure measuring about 9 to 10 feet long and also the part of the lower gastrointestinal tract. The small intestine is located just behind the stomach, which is found completely coiled and consists of folds and ridges.

Large Intestine –This is a thick and long tube-like structure measuring about 4 to 5 feet in length. It is present just beneath the stomach and wraps over the superior and lateral edges of the small intestine. It functions by absorbing water and support in the breakdown of wastes to fetch small nutrients.

For more information about the Digestive System, its structure, functions and other related topics, visit us at BYJU’S Biology