An ecosystem is a functional unit of nature with constant interaction between living entities and also with their ambient physical environment. An ecosystem differs greatly in many aspects such as its size, from a small lake to a large forest or an ocean. Since it hugely varies and is complex and big, it is conveniently subdivided into two broad categories such as aquatic(pond, lakes, sea, ocean) and terrestrial(grassland, forest, desert). Some ecosystems are man-made and are referred to as artificial ecosystems. Get enlightened about ecosystems furthermore.

Q.1. Give an example of a secondary carnivore found in an aquatic ecosystem.

A.1. Waterfowls and ducks

Q.2. The base tier of the ecological pyramid indicates?

A.2. It represents the producers

Q.3. Name the state in the process of succession at which relapse at an earlier stage is possible.

A.3. Reversion at an earlier stage is possible due to anthropogenic actions and natural disruptions such as flood, fire etc.

Q.4. Pick an omnivore that appears in both the decomposer and grazing food chain.

Q.5. Why is pitcher plant called a producer?

A.5. Nepenthes or the pitcher plant is an insectivorous plant that has the potential of trapping solar rays for photosynthesis and is chlorophyllous. It is produced in the soil that lacks nitrogen. Hence they trap insects to compensate for the deficit of nitrogen.

Q.6. List two entities which are found in more than one trophic level in an ecosystem.

A.6. Sparrow and human beings.

Q.7. Justify why the climax phase is attained at a faster pace in secondary succession in comparison to the primary succession.

A.7. It is because of the availability of soil. Succession in primary succession begins from bare rocks which is a time-consuming process.

Q.8. In a xeric succession, which among these following species is a pioneer?
Fern, Lichens, Bryophytes.

A.8. Lichens followed by Bryophytes and then succeeded by ferns in the order.

Q.9. In an ecosystem, which is the ultimate source of energy?

Q.10. Is the edible mushroom a heterotroph or an autotroph?

A.11. It is because of the lack of sunlight with increasing depth. Oceans lack nitrogen, which is an important source of nutrient for plants. High salinity offered by oceans does not serve as a favourable condition for all plants. More importantly, the absence of soil is the reason why plants do not sustain.

Q.12. State why at the herbivore level, the rate of assimilation of energy is called as secondary productivity.

A.12. It is because the biomass available to the consumers for further consumption is formed by the autotrophs as a product of primary productivity.

Q.13. Why are nutrient cycles also referred to as biogeochemical cycles?

A.14. In ecological communities, they are found in remarkably dry conditions like rock deserts and sandy deserts.

Q.15. What is self-sustainability?

A.15. It maintains itself, with its own independent efforts.

Q.16. Observe the ecosystem and answer the questions: 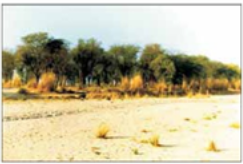 a) Name the ecosystem

b) Give the name of a plant that is a characteristic of this ecosystem.

A.17. They are all detritivores, primary consumers in a detritus food chain.

Q.1. Availability of energy is less for entities at higher trophic levels. Why?

A.1. The 10% energy flow law suggested by Lidman, is followed in the ecosystem. As per this law, only 10% of the energy that is available at every trophic level is transferred to the next trophic level. The remaining is lost in the form of heat(during respiration). As we approach the higher levels, energy keeps declining that is available to entities. Hence the topmost carnivore attains the least amount of energy in a food chain.

Q.2. Why is the number of trophic levels in an ecosystem limited?

A.2. There are not more than 4-5 levels since the energy flow declines as we approach higher levels as only 10% of energy is passed from one to the next progressive trophic level. The remaining energy is lost during respiration and in other crucial activities to the sustenance of life. In case there are more levels, the remaining energy will be limited to an extent that it furthermore would not be able to sustain any trophic level through energy flow. Hence levels are limited.

Q.3. Can we address an aquarium as a complete ecosystem?

A.3. An aquarium is an artificial ecosystem made by man. An ecosystem is said to be complete if it possesses all the biological and physical components vital for the survival of fishes. Hence it is a complete ecosystem.

Q.4. Why decomposition occurs at a faster rate in the tropics?

A.4. Decomposition is governed by climatic factors hence favourable humidity and temperature in the tropics facilitate the activities of decomposers along with the soil rich in dead remains supporting rapid rate of decomposition.

Q.5. State any two activities where humans intervene with the carbon cycle.

A.5. Massive burning of fossil fuels for transport, energy and deforestation.

Q.6. Explain why the flow of energy at different levels in an ecosystem is unidirectional and non-cyclic.

A.6. The flow of energy is one way and non-cyclic( Plants →Herbivores→Carnivores→Top Carnivore). The energy that is transferred from 1st to the next trophic level decreases with each passing level and cannot flow in the reverse direction.

A.7. Microbes → Saprophytes. They derive their energy from the remains or dead organic matter of animals and plants, wherein the digestion is extracellular.

Q.8. How would the issue of ‘poaching of tigers’ affect the functioning of the ecosystem?

A.8. Tigers help in maintaining ecological balance and forms an important part of the food web. It regulates the extensive growth of herbivores and helps in eliminating sick, old animals from the community, representing the health of the forest. Hence saving tigers is saving forests as tigers cannot survive in places where it hunts(herbivores or trees) thereby securing water and food for all.

Q.11. Describe the incomplete ecosystem with an example.

A.11. Limited or unavailability of biotic and abiotic components makes an ecosystem incomplete. Example – Benthic zone in an aquatic ecosystem

Q.12. In the study of the ecosystem, what are the limitations of ecological pyramids?

A.12. Following are the shortcomings:

Q.13. Differentiate between humification and mineralization.

A.13. Following is the difference: Q.15. Why is the rate of decomposition affected by abiotic factors such as pH of the soil, availability of oxygen, temperature etc?

A.15. The pH of the soil affects the structure of basophilic and acidophilic microbes. The aerobic processes occur in the presence of oxygen causing complete degradation of a substance whereas anaerobic processes occur in the absence of oxygen, resulting in incomplete degradation of a substance. Microbes are unable to grow to their fullest at higher temperatures but at low or high temperatures, stress-tolerant microbes flourish.

A.2. An ecosystem which possesses more producers will be more productive. Young forests grow quicker than older and mature forests and hence are more productive in terms of primary productivity. The alpine meadows and shallow polluted lakes will be less productive since they have less number of producers and more dead matter.

Q.3. Explain the three ecological pyramids. What data is propagated by each pyramid in association with function, structure and energy in the ecosystem?

A.3. The three types of pyramids are as follows:

Q.4. Explain how energy flow supports the second law of thermodynamics in an ecosystem.

A.4. As per the second law of thermodynamics, every activity that includes transformation includes wastage of energy in the form of heat and rise in disorganization excluding deep hydrothermal ecosystems. Out of the total PAR(Photosynthetically Active Radiation), only 2-10% is absorbed by organisms involved in photosynthesis to produce organic matter. Furthermore, the energy is utilized in metabolic activities, to form food and in storing biomass(very less). Biomass or the trapped energy is passed to the next trophic level as per the Lindeman’s law. 10% of the stored energy is transferred from one to the next consecutive trophic level.

A.5. a) It diminishes primary production in an ecosystem and hence unavailability of biomass to higher trophic levels b) It would result in an increase in primary productivity and biomass of producers. Carnivorous animals, due to unavailability of food, will not survive. c) There will be an increase in the herbivore population, resulting in over-grazing and hence desertification.

A.6. Examples of man-made ecosystems are – farmhouse and aquarium. In these ecosystems, maintenance of biotic and abiotic components occurs through measures such as – feeding, cleaning, adequate oxygen supply to fishes in aquarium and irrigation in crop or farmhouse. In a natural ecosystem, abiotic and biotic components are maintained naturally such as – the nutrient cycle, prevention of soil erosion, self-sustainability, reduction of threat due to global warming etc.

Q.7. Explain the biogeochemical cycle. What is the significance of the reservoir in this cycle? With a reservoir situated in earth’s crust, give an example of a sedimentary cycle.

A.7. The movement of nutrient molecules through different components of an ecosystem is known as a biogeochemical cycle. There are two types of nutrient cycles – Sedimentary and gaseous. For the gaseous type of cycle, the atmosphere is the reservoir(nitrogen cycle) and for the sedimentary cycle – the crust of the earth is the reservoir (phosphorous cycle). The function of the reservoir is to be able to compensate for the deficiency that takes place due to the inequality in the flow of efflux and influx. Various environmental factors such as temperature, moisture in the soil, pH etc govern the rate of liberation of nutrients into the atmosphere. The phosphorous cycle is an example of the sedimentary type of cycle as it moves from land and approaches the bottom of the seas and reverts to the land, whose natural reservoir is the crust of the earth. Phosphorous is contained in rocks in the form of phosphates. Soil erosion and weathering cause them to enter water bodies. Movements of the crustal plates lead to seafloor being uplifted and hence exposure of phosphates on the land surfaces. Weathering over a period of time liberates phosphates, which are softened in soil and seeped by plant roots. Herbivores and other entities attain this element from producers. Decomposition of dead organisms and waste products by phosphate-solubilizing bacteria release phosphorous. Get enlightened about the ecosystem and related biology concepts by registering at BYJU’S.