The pituitary gland is a small organ, about the size of a pea present in the brain. It comprises of two parts, namely anterior pituitary and posterior pituitary. It is one of the vital glands of our body as it controls a lot of vital hormones such as thyroid-stimulating hormones,  puberty hormone, growth hormone, prolactin hormone. Pituitary Adenoma is a tumour that arises in the pituitary gland. They are comparatively common and usually not hereditary.

There are three categories. 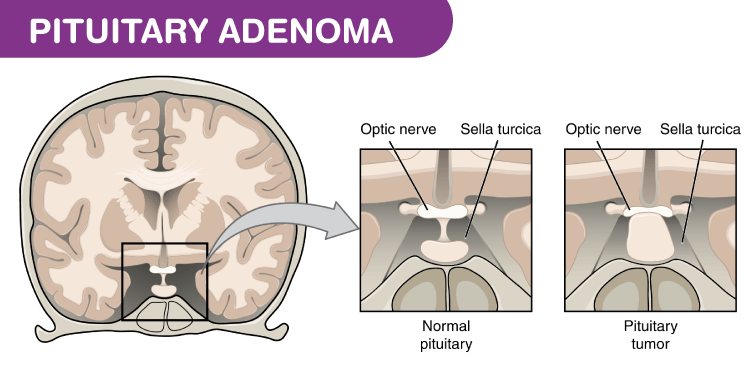 It is a tumour that is composed of glandular tissue. It has a diameter greater than 10 mm. They usually occur in adrenal and pituitary glands. However, they could also be formed in the thyroid gland, colon, and kidneys. Symptoms include loss of vision caused due to compression of the optic chiasm, dysfunctioning of the pituitary gland as stated above.

Gamma Knife is one of the advanced types of radiotherapy that is carried out to achieve the same results as that of surgical techniques but might take several years altogether for the normal functioning of hormones.

It is a tumour that affects a pituitary gland which is less has the size diameter of 10 mm. Symptoms of the same include nausea, unexpected hair loss, dizziness, vomiting, loss of vision, tiredness, headaches, breast changes, and change in the menstrual cycle. The only way to cure the same would be through surgery.

It is one of the effective ways to control the growth of the tumours as all tumours could not be removed surgically.

1. What is Pituitary Adenoma?

Pituitary Adenoma is a tumour that arises in the pituitary gland. They are relatively common and usually not hereditary.

2. What are the three categories of Pituitary Adenoma?

The three types are:

For more information about the Pituitary Adenoma, visit BYJU’S Biology.