Anatomy is the study of body parts which can be seen easily through our naked eyes.

Anatomy can be defined as a study of the internal structure and organs of living beings. In the field of medicine, life science and in other research sectors, anatomy plays a vital role by helping to learn about the structures, characteristic features and other different parts in all living organisms, including plants, animals, birds, insects and humans.

There are different types of Anatomy. 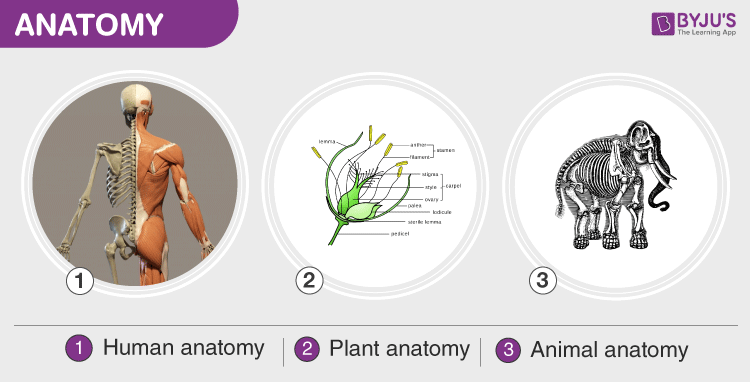 This is also called Histology, which mainly deals with the study of cells, tissues and other small or minute structures or living things which are not visible to the naked eye.

This is also called the Macroscopic anatomy, which mainly deals with the study of different structures, which are visible to the naked eye. This type of anatomy provides complete structural information along with its internal and external parts.

Also Refer: Types of Organs in a Human Body

This is also called phytotomy. It mainly deals with the study of the internal structure of plants including the cells, tissues, roots, stem, leaves, flower, fruit and seeds.

This is also called zootomy. It mainly deals with the study of the internal structure of animals, birds, insects including the cells, tissues, organs, bones and other organs and organs systems of the animal body.

Let’s know about the amazing and interesting facts about anatomy.

There are various interesting and amazing facts about anatomy. A very few of them are discussed below point-wise, which we may not be aware of.

There has been a myth that the human heart is located on the side of the chest, but in reality, the heart is neither on the left or the right but the centre of the chest.

The brain grows the fastest up to 5 years of age and the weight of an adult human brain is 1.5 kg (3lbs).

The cornea, a front portion of the eye, is the unique part of the entire human body, which lacks blood supply and receives its oxygen directly from the air.

Gross anatomy is used for studying in detail about the different organs and is mainly used in endoscopy, angiography, magnetic resonance imaging (MRI) and X-rays.

The human tongue is the strongest muscle and the jawbone is the hardest bone in the human body.

The liver is the largest external organ in the human body and the average weight of a human liver ranges between 1.44 kg and 1.66 kg. This is the only organ, which gets dual blood supply from the hepatic arteries and hepatic portal.

Both the circulatory system and respiratory system function combined in circulating blood and the oxygen gas throughout the body.

The stomach is the widest, hollow, muscular, expendable and important organ of the human digestive system, which has a capacity to hold up to 1.5 litres of drinks or food.

Histology, which is also called microscopic anatomy, is the study of cells and tissues as discerned by a microscope.

The human egg or the ovum is the largest cell in the human body and it is produced by the female reproductive system.

Ever wonder what makes that lub-dub, lub-dub sound that comes from your heart? Those are actually the sounds made by the heart valves as they open and close.

The largest blood vessel is the aorta. On average, there are 100,000 miles of blood vessels in an adult human body.

Histology is a type of anatomy, mainly used in the diagnosing of cancer cells, in the examination of cells, tissues and also in biopsies and other domains of life science.

Humans have the strongest and the hardest teeth which are equivalent to rocks. Teeth are the only body part which cannot repair themselves, hence they require proper care. The four different types of teeth in human are – incisors, canines, premolars and molars.

There are around 38 trillion cells in the human body, which are involved in carrying out different types of specific functions essential for everyday living.

Lungs are the only organ in the human body that can float on water The left lung is smaller than the right lung.

There are more than millions of nerve cells in our central nervous system. These include 100 billion neurons in the human brain and about 13,500,000 neurons in the spinal cord.

These were a few interesting and amazing facts about anatomy. To know more about Anatomy, their types, functions, other related topics and important questions, keep visiting our website at BYJU’S Biology.

Test your Knowledge on Anatomy!
Q5