The female reproductive system consists of the primary as well as accessory sex organs. The primary sex organs in females are a pair of ovaries, which produce ova or egg and they also secrete female sex hormones like progesterone and estrogen. The other accessory sex organs include the uterus, fallopian tubes, cervix and vagina. The external genitalia comprises the labia minora, labia majora and clitoris. The mammary glands are not considered genital organs but are important glands in the female reproductive system.

Let’s learn more about the female reproductive system with a well-labelled diagram. 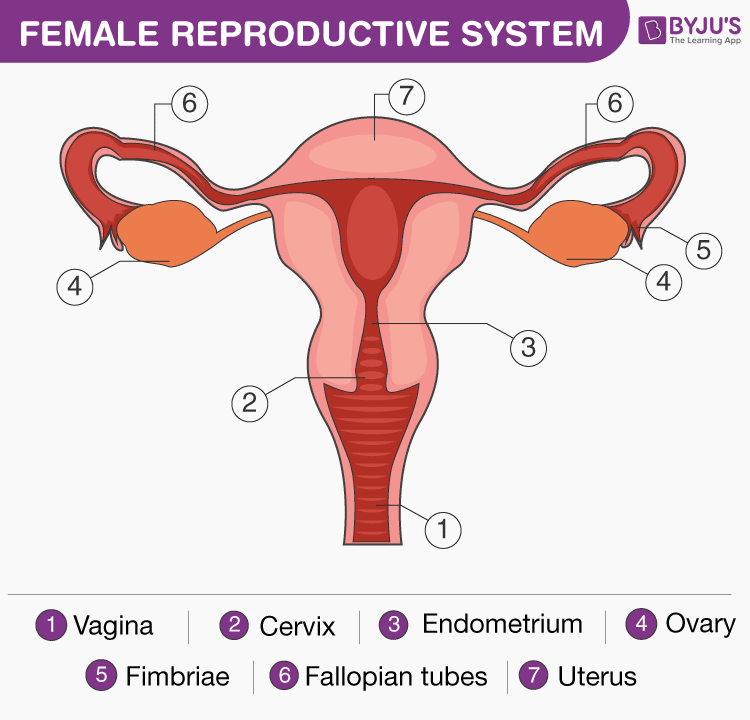 The female reproductive system is framed to perform different functions. It creates egg cells that are essential for reproduction known as ova. The system is organized to deliver the ova to the region of fertilization. The egg fertilization takes place in the Fallopian tubes along with the sperm. The implanting in the walls of the uterus and initiating the stages of pregnancy is the next step of fertilized eggs. Apart from the above-mentioned functions, the female reproductive system is also involved in the production of female sex hormones to maintain the reproductive cycle.

The female reproductive system is composed of a pair of ovaries along with oviducts, vagina, cervix, uterus, and the external genitalia that are located in the pelvic region. These parts along with a pair of mammary glands that are integrated both functionally and structurally also support the process of ovulation, fertilization, birth and finally the child care.

Ovaries act as the main female sex organs that produce the female gamete and various hormones. These organs are situated one on both the side of the lower abdomen. Each ovary measures about 2 to 4 cm in length which is then connected to the uterus and pelvic wall through ligaments. The ovary is surrounded by a thin covering of epithelium, encloses the ovarian stroma and is divided into two zones – outer cortex and the inner medulla.
The cortex consists of various ovarian follicles in different stages of development. The ovarian follicle is called the basic unit of the female reproductive system. Each oviduct is divided into three anatomical regions- ampulla, isthmus, and infundibulum.

A uterus is also called the womb. It is a muscular, inverted pear-shaped organ of the female reproductive system. The walls of the uterus consist of three layers- the inner glandular layer, the middle thick layer, and the outer thin layer. These three layers are maintained by ligaments which are attached to the pelvic wall which then opens into the vagina from a narrow cervix. The cervical canal along with the vagina creates the birth canal. The vagina is a muscular tube which starts at the lower end of the uterus to the outside.

Fallopian tubes are a pair of muscular tubes and funnel-shaped structures, extend from the right and left of the superior corners of the uterus to the edge of the ovaries. These tubes are enclosed in small projections called fimbriae that swipe over the ovaries to pick up released ova and deliver them to the infundibulum for supplying the uterus. Each fallopian tube is covered by cilia that functions by carrying the ovum to the uterus. 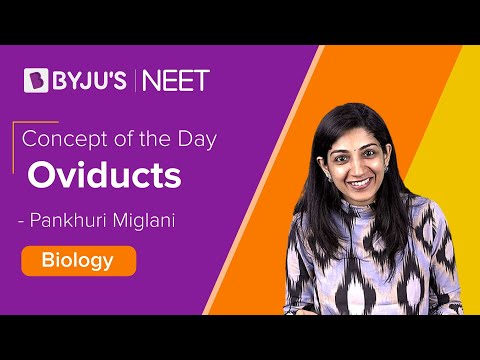 The vagina is a muscular and elastic tube that connects the cervix to the external body. It functions as the receptacle for the penis in sexual intercourse and delivers sperm to the fallopian tubes and uterus. It also acts as a birth canal by expanding to allow delivery of the fetus during childbirth.

Ovulation is the process of releasing the eggs from the ovaries. This process takes place as soon as the follicle is fully grown and reaches its size along with the accumulation of liquid in the follicle without a significant rise in pressure. As the follicle swells out, a small oval-shaped area, the stigma or macula pellucida appears sticking outward as a clear cone area and later undergoes localized changes in colour, integrity, and translucency. The secretion of estrogen hormones reaches the maximum level before the ovulation. After the surge of luteinizing hormone, ovulation occurs at the site of the stigma. This surge is essential for ovulation.
Ovulation is the process in which the follicle is separated by releasing of follicular fluid along with the ovum surrounded by the corona radiata. The cells of the corona radiata will separate later in the presence of spermatozoa. In ruminants, the oocytes have already lost their corona at the time of ovulation. The very active fimbriae, end of the oviduct picks up the ovum. If fertilized ovum or zygote undergoes cleavage and makes its way to the uterus for implantation. If not fertilized, it degenerates within 24 hours.

All females, after reaching their puberty produce mature egg cell every month during a process called the menstrual cycle.  During this period, an ovary discharges a mature egg, which travels to the uterus. In the uterus, if the egg is not fertilized, the lining in the uterine sheds away and a new cycle begins. Overall a menstrual cycle lasts for 28 days, in some cases, these cycles may either last for 21 days or as long as 35 days in some individuals. The entire process of the menstrual cycle is controlled by the endocrine system and the hormones involved are FSH, LH, estrogen, and progesterone. Both FSH and LH hormones are produced by the pituitary gland,  whereas estrogen and progesterone hormones are produced by the ovaries.
Alon with the hormonal disorders, there are many other factors, which are responsible for the disturbance in the menstrual cycle. The responsible factors include diet, exercise, stress and weight gain or loss affects the menstrual cycle. The cycle may be irregular at times, especially during puberty.  The menstrual cycles occur every month from the time of puberty up to the age of 45 to 55, except during pregnancy. After the age of 55 ovaries slows down their production of hormone and release of mature eggs. Progressively, the menstrual cycle stops, therefore, the woman is no longer able to become pregnant.

Following implantation, the placenta originates from maternal and fetal tissues, producing human chorionic gonadotropin (HCG) that helps in maintaining the level of corpus luteum in the ovary until the placenta begins synthesizing its own progesterone and estrogen hormones.

Estrogen and progesterone hormones are produced by the ovaries that foster the development of reproductive organs by maintaining the proper uterine cycle and by developing female secondary sex characteristics. During menopause, usually between age 45 and 55, the uterine cycle stops, and the ovaries are no longer produce estrogen and progesterone hormones.
Infertility
In general, infertility can be defined as the failure in couples of not getting pregnant, despite having carefully timed, unprotected sex for one year. It is estimated to be around 15% of all couples undergo infertility. The reasons behind this infertility in males and females are-

There are various birth control methods and some of them are as mentioned below.

To know more about the female reproductive system and its functions, visit BYJU’S. 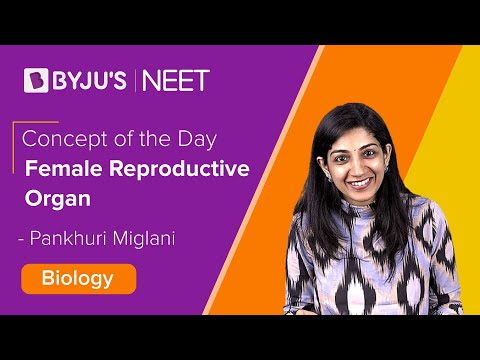 What are the three layers of the uterus?

The outer thin layer or the serous layer is the covering of the uterus derived from the peritoneum. Then comes the myometrium or the middle muscular layer. It is the thickest layer and is made of smooth muscle fibres. The third layer is the glandular layer called the inner mucus layer or the endometrium.

What is the cervix?

What are the functions of the ovary?